Indonesian national cuisine is extremely interesting. It is a combination of regional cuisines, common on different islands, and ethnic cuisines. Culinary traditions were also influenced by religion, the cuisines of neighboring countries, as well as dishes and products imported by Europeans. There are so many unusual dishes that you can taste only a small part of them in one trip. Dishes have a spicy taste. Indonesian cooks use a lot of spices and spicy food combinations. A lot of seafood and fish, chicken, as well as rice, sweet potatoes, and corn are used in cooking. Each region has its own characteristics and dishes.
Unique sights of Indonesia from our series 'Extreme places on Earth'
These spots really worth the attention of a real traveler-researcher. …
Read further
Indonesian and Malaysian culinary traditions are found in Borneo. Indigenous traditions have influenced them. Few hundreds of ethnic groups live on the island. Most of the population is Muslim. Therefore, pork is prohibited. The most famous dishes are fried rice, grilled shrimp, and noodles. Garlic, ginger and thick sauces are generously added to dishes. Unusual fruits grow in tropical forests. These are bambangan (a giant fruit resembling mango) and rambutan (a juicy fruit similar to lychee). Thick soups with noodles, chicken and fish are prepared in pots. Delicious jaruk is made from wild boar meat or fresh river fish. They are the filling for a bamboo tube. Rice and salt are also added. The dish is ready in a few weeks.
Mackerel, chili, ginger, red onion, grated seeds of bambanga, and a couple of tablespoons of lime juice are used to prepare hinava. This dish is served with white rice. Pinasakan Sada made from fish basung, fruit takob akob, fresh turmeric, and salt. Copyright www.orangesmile.com
Indonesia sightseeing - top places to visit
Indonesia is the most picturesque country of South East Asia that never ceases to amaze its guests with numerous natural and cultural sights. While …
Read further
The Minangkabau ethnic group inhabits a large part of Sumatra. Their ethnic cuisine is called Padang. The unusual serving of dishes is typical for this cuisine. All dishes are served at the same time without dividing into the first course, main dish, and dessert. Food is eaten with the right hand. A bowl with water and lemon slices is placed on the table for washing. A lot of meat but only not pork is consumed in Sumatra. Most of the local residents practice Islam. Rice was developed very early on the island. It was made the main agricultural crop. The inhabitants of the country also began to raise a lot of livestock, especially cows. 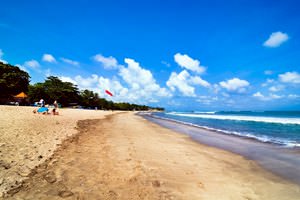 Pre-marinated meat, poultry, fish or seafood are used to make the popular gulai sauce. The ingredients are boiled in coconut milk with spices (coriander, black pepper, chili, garlic, shallots, cinnamon, and others). There are many variations of the sauce depending on the ingredients. Rendang is one of the most popular dishes. Beef pieces are stewed in hot coconut milk and chili sauce until the liquid evaporates. There are variations on the theme with duck, chicken or mussels. In addition to meat, offal is often consumed. For example, gulai sauce can be made from beef liver or brain. A Karupuak Jangek is crackers from cow skin.
National traditions and mentality of people in Indonesia
More than 300 indigenous ethnic groups, including Javanese, Sundanese, Madura, and the others reside in the territory of Indonesia. The Chinese are …
Read further
The cuisine of the island of Java was influenced by Arab, Chinese, and Indian cuisines. Spices are not overused here. Therefore, the dishes are not too spicy. Local cuisine is divided into Central Javanese, East Javanese, and regular Javanese cuisine. The difference between them is mainly in tastes. The cuisine of Central Java is sweet and not spicy. Eastern dishes are less sweet. Adding chili to a meal is a special feature of it. Boiled rice is the most famous food. It is served with many dishes. Tumpeng is yellow rice, which is laid out in the form of a cone. It is used for various ceremonies. The rice used for the preparation of lontong (sausage made of rice boiled in banana leaves) and ketupat (rice boiled in a woven palm leaf wrapper). Rice is cooked in coconut milk. Turmeric is usually added to it. Javanese are also very fond of taro, yams, and sweet potatoes. Cereals and bread are unpopular here. Rice can be served with noodles and potatoes. Palm sugar, sweet soy sauce, coconut milk, nut sauce, tamarind, shrimp paste, shallot, garlic, turmeric, and ginger are actively used in cooking. 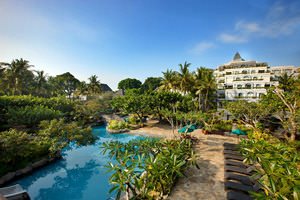 Soto Ayam is a soup originally from the town of Jepara. The people of Java are very fond of it. It is made from chicken, lamb or beef and seasoned with turmeric. Kuluban is a traditional salad originally from Central Java. One of the oldest dishes in the region is made from green beans, parka and jackfruit (Indian breadfruit), orange leaves, bean sprouts, kaempferia, shrimp paste, crushed coconuts, red pepper, salt, and sugar. Krupuk (chips made of starch or flour) is also added sometimes.
Indonesia cultural sights. What to see?
The territory of Indonesia is one of the oldest places that ancient people began to settle. The first states were formed before our era. The region's …
Read further
The culinary traditions of Balinese cuisine were formed under the influence of Indian and Chinese cuisines. Most of the inhabitants of Bali are Hindus. Therefore, the local cuisine differs significantly from the rest of the Indonesian cuisine. Pork is eaten here. One of the region's signature dishes is a spiced suckling pig, roasted on a spit. Beef is not consumed on the contrary. Cooked rice is served with almost all dishes. Garlic, Kaffir-lime, ginger, and turmeric are used as spices. The classic set of Balinese spices includes 8 components: white pepper, black pepper, coriander, cumin, cloves, nutmeg, sesame, and lumbang. The gods are honored before the meal. Some products are used for rituals. 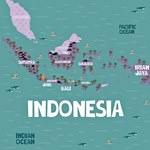 Cuisine and restaurants in popular cities of Indonesia

Jakarta
Hazara restaurant dedicated to Asian cuisine is also a very unusual establishment. Among its specialties you will find many meat delicacies, but visitors are attracted to the restaurant not only because of its unique menu, but also because of the original decoration of interior. Even the uniform of waiters is stylized to ancient Asian costumes. Anatolia is usually considered the best restaurant in the city dedicated to Turkish cuisine. The restaurant’s menu is regularly updated with new … Read more

Bandung
Mie Ayam chicken noodles will become a perfect way to rejuvenate after a long day full of sightseeing and excursions. This dish is popular among both locals and tourists. Adherents of vegetarian food will surely like the dish called “nasi timbel”, which is cooked from rice baked in banana leaves together with various vegetables and herbs. "Bandung laksa" is one more quite an original dish. This is a soup cooked on a chicken broth with the addition of turmeric, beans sprouts and coconut … Read more

Surabaya
Among the most popular treats, bakvan meatballs and the classic tofu soup, which locals sometimes call ‘tahi’ are worth mentioning. There are lots of international restaurants too. You can also find small cafes and restaurants in large shopping complexes offering guests a traditional American fast food. One of the most popular restaurants of Indonesian cuisine is BU Kris; it is possible to try all of the above mentioned national specialties there. The restaurant serves gourmet delicacies … Read more

Denpasar
Local salads are very popular with visitors, some of them look like a combination of very unexpected ingredients. However, fans of meat will like Denpasar restaurants too - "Sate" is considered to be the most popular treat. It can be prepared from beef, pork or chicken meat wrapped in banana leaves and baked with herbs. The dish is typically served unwrapped, which gives it a very impressive look. The local cuisine has a lot of peculiar traditions. Thus, Sate should only be eaten with a … Read more

Bali
The local restaurants will be definitely loved by devotees of vegetarian food. Exotic salads made of fresh vegetables and bamboo shoots, coconuts and palm hearts, hearty stew with various sauces and fruit desserts – the local chefs do not cease to amaze their customers with new signature dishes. Despite the fact that the locals are rather reserved when it comes to consumption of alcoholic beverages, the restaurants of Bali will offer a wide selection of European wines. If you want to try the … Read more

Java
Restaurants of local cuisine offer guests a decent selection of vegetable dishes that will surely appeal to adherents of vegetarian food. Beans are common components of numerous dishes; meal is considered incomplete without rice that is widely popular in Indonesia. As for meats, the vast part of dishes is cooked of chicken, but attractive treats of beef can be also found in restaurants. We should mention exotic desserts made of a variety of fruits. Many of them are able to surprise visitors … Read more

Sumatra
The most popular side dish is nasi, boiled rice, which can be added to virtually any dish. Unusual delicate rice noodles and even rice crisps, which became a kind of local fast food, are also made of this cereal. One of the most popular national garnishes is nasi goreng, fried rice with an addition of vegetables or seafood. An important place in the national menu is held by vegetable dishes, which are sure to delight devotees of vegetarian food. Chefs use cabbage, eggplant, tomatoes, carrots … Read more

Sulawesi Island
In Manado you can try brenebon. Most people will like this filling soup, which contains pork, beans, spinach, and salt, and sugar, and spices of course. Tinutuan – a porridge, made with at least a pumpkin, rice, and cassava with spices is a kind of a local landmark, that’s why you can buy it at any corner. They also serve a plate with fried onion and little meatballs or fish cutlets. If you want to try kebab, ask for “satay” or, in the north of Sulawesi, for “rogay” (the name of … Read more