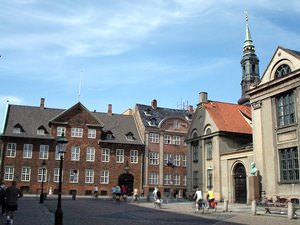 is an ultra-modern hotel of a very unusual shape. It is located in two angled towers connected by a bridge on the top floor. Because of this courageous architectural experiment, it looks like rooms on top floors are floating in the air, and visitors feel like they’re flying. Thanks to its creative architecture, the unusual hotel has got an informal name – “the dancing couple”. Bella Sky is not the most angled building in the world as it has been overcome by a tower in Abu Dhabi, but it can be safely called the most angled hotel in the world. The designer interiors of Bella Sky Hotel are no less impressive than its outer look. A team of designers used the best traditions of the Northern design in the building, such as simplicity, functionality and natural materials. An eye-catching innovative detail, a sculpture chandelier, was made exclusively for Bella Sky by specialists from GXN from long acryl tubes and more than 7,000 LED lights. Together, they create a unique lighting system with an interesting play of shades.
CPH Living
Check on the map. From Copenhagen center - 0.8 km
CPH Living

is the first floating hotel in Denmark. It was thoroughly rebuilt in order to provide guests with comfort and help them enjoy an unusual and relaxing marine vacation. The modern hotel is equipped with all up-to-date technologies, so it’s also one of the best hotels of its star category.
Check the hotel prices and availability
Copyright www.orangesmile.com
Central Café&Hotel
Check on the map. From Copenhagen center - 1.8 km
The smallest hotel in the city, Central Café&Hotel

, has only one 12 sq. meters large room. Despite its size, the room has everything needed – a bed, a shower, toilet and a sink. The hotel is located on the second floor of the smallest coffee house in the world, which has only five seats. The owner of this charming place is convinced the small café sells the most delicious coffee, and visitors can see whether his words are true and at the same time enjoy the home-like atmosphere of that place.
Copenhagen Island Hotel Check on the map. From Copenhagen center - 1.9 km
Another unusual place worth visiting, Copenhagen Island Hotel

is located in the very center of the city, on a manmade island. The hotel is open in a modern building with large windows and has as many as 300 rooms. All the rooms are distinguished by interesting design and feature colorful branded furniture and bright textiles. Large, wall-size mirrors create an illusion of a bigger space. The hotel’s restaurant, Harbour, is a very popular place that specializes in fish and seafood dishes.
Check the hotel prices and availability
Wakeup Copenhagen - Carsten Niebuhrs Gade is one of such places. The hotel is located on one of the central streets of Copenhagen, where it occupies a creative 12-storey building with a black façade. Because of windows of different size, the building looks very futuristic. This original hotel was developed by Dutch architect Kim Utzon. Its rooms are also distinguished by unusual style, with many rooms coming with a spacious bathroom with a window. Rooms on the top floor of the high-rise building are particularly appealing as they feature awesome panoramic views of the city.
Check the hotel prices and availability
Cabinn Metro Check on the map. From Copenhagen center - 5.2 km
When it comes to describing the most unusual hotels in Copenhagen, Cabinn Metro

is surely one of them. This hotel is also located in a big and very unusual building, the artistic façade of which resembles a large holographic screen. This hotel is one of the largest in the city, so travelers will find there more than 700 rooms of different categories. There are miniature single rooms, functional rooms with two-tier beds perfect for groups of travelers, and so on.
Check the hotel prices and availability

Search for authentic hotels in Copenhagen

Unordinary city break in the neighbours of Copenhagen

Goteborg
Gothenburg has lots of unique hotels. Original “hotels on water” are surely becoming the hallmark of the city, and the hotel Ibis Styles Göteborg City is one of such unique places. It was opened on the city’s harbor in a beautiful and completely renovated ship. The hotel presents 120 comfortable rooms for customers to choose from. All rooms are predominantly white, with ... Open »
Berlin
Surrealistic hotel Propeller Island City Lodge belongs to sculptor and architect Lars Stroschen. Not only he designed the whole hotel himself, but also made all furniture and other elements of décor. There are 30 guestrooms in the hotel in total, and each room has its own theme and story. For example, the “flying room” has all furniture set vertically or an angled floor. ... Open »
Bremen
A tremendously beautiful hotel, Hotelschiff Perle Bremen is located on Schlachte promenade. The hotel is open in a yacht that was transformed into a hotel in 2002. Hotelschiff Perle Bremen has only two magnificent guestrooms with amazing terraces and picturesque views of the river. Thanks to convenient location, the hotel is a wonderful choice for travellers who plan to devote ... Open »
Oslo
The next hotel, Radisson Blu Plaza Hotel, Oslo, never ceases to attract fans of modern style and comfort. The hotel is open in one of the tallest buildings in the city – a luxurious 37-storey skyscraper with a shiny glass façade. The hotel has more than 650 guest rooms, which offer an unforgettable panoramic view of the city. Guests can admire the panorama of Oslo not only ... Open »
Dresden
Hotel Villa Sorgenfrei & Restaurant Atelier Sanssouci is located in an ancient building that literally dives in lush greenery. This posh mansion was built in the 18th century, but thanks to efforts of modern designers and architects, visitors of this wonderful hotel can admire the inimitable atmosphere of the past. Inside the hotel, travelers will be able to see a unique ... Open »
Stockholm
Savvy travelers also have an opportunity to spend several days in one of the most unusual hotels in Stockholm if they decide to stay at Jumbo Stay hostel. It is open in an old Boeing 737 airplane. Inside the hostel, travelers will find comfy guest rooms for two, three, and four guests. There is also a cozy single room open in the gear wheel well. Fans of comfort are welcome to ... Open »
OrangeSmile.com - online travel reservation expert providing reliable car rental and hotel booking services. We feature more than 25.000 destinations with 12.000 rental offices and 200.000 hotels worldwide.
Secure Server