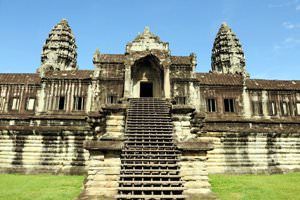 Located in Cambodia, the world famous temple complex Angkor Wat can interest not only amateurs of excursions, but also those who want to diversify their holiday with unusual entertainments. One of the main features of the ancient temple is its staircase leading to the entrance. Its stone steps are very narrow, so it is necessary to walk along the stairs as carefully as possible.
The staircase of Angkor Wat temple was built so complex specially for numerous pilgrims to remember how difficult a path to the goal can be. The construction of the beautiful temple took place in the early 12th century and lasted more than 30 years, it was dedicated to god Vishnu. Angkor Wat is a unique architectural monument, surrounded by many beautiful terraces with sculptures and other symbolic structures.
The only way to fully enjoy the beauty of the architectural complex is to climb up its steep staircase and to stroll along the picturesque terraces. From some viewing platforms you can see all five towers of the temple at once, as well as during the ascent of the stairs, tourists will have an opportunity to admire the fairy-tale beauty of bas-reliefs. While contemplating the surrounding beauty and greatness, do not forget to look under your feet. ... Complete sights collection 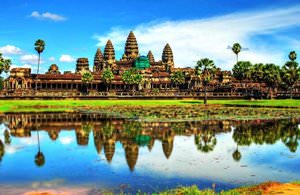 Angkor Wat temple located in Cambodia is one of the top large scale religious buildings of the world. It is the great monument of Khmer art known throughout the world. The luxurious temple dedicated to the Hindu god Vishnu covers an area of ​​over 400 square meters. The three-tier structure with a complex system of passages and stairways is amazing. Construction of this outstanding temple took place in second half of the 12th century. Three centuries later,  the unique temple has come to a complete desolation.
Europeans got acknowledged about this prominent religious sight in the second half of the 19th century. Since then the awesome temple was attracting an incredible number of travelers and explorers every year. The main attraction of Cambodia hides many secrets, especially those associated with the temple construction technology. It is composed of a surprisingly smooth stones that resemble polished marble. Masonry was carried out without the use of any solution. At the same time, the temple remains in good condition for more than 800 years.
Carved walls are fascinating. You can see the images of mythical characters, scenes from famous literary works, as well as war scenes along the temple. In total, there are over a thousand unique bas-reliefs on the walls of Angkor Wat. The fact that construction of the temple took a little more than 30 years makes it even more unique. Recent studies have also found out that the process of construction was accurately correlated with a number of astronomical events. ... Complete sights collection 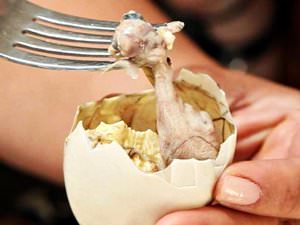 Cambodia is also famous for its exotic dishes. Many experienced travelers say that locals eat just about anything in this country. One of the most famous national delicacies of Cambodia is balut. This boiled duck egg looks no different from the usual. However, the main secret of delicacy is hidden inside the shell. Locals cook eggs, inside of which there is already a full-fledged chick. Not every adrenaline-seeker is courageous enough to eat it.
In Cambodia, balut is considered a predominantly male meal as the locals believe that it positively affects the potency. The most high-quality and useful is an egg surrounded by the amniotic juice. The latter is considered a powerful aphrodisiac. It is important to note that the dish is widespread not only in Cambodia, but also in Vietnam, Laos, Malaysia, Thailand, as well as some provinces of China and the Philippines.
In some countries, duck eggs with an embryo are eaten raw, while others cook it. To taste this unique dish, gourmets won’t need to go to expensive restaurants. Balut is a common street food, so you can taste it virtually at any Cambodian market. To make the dish not bland, it’s flavored with salt and pepper, and sometimes served with herbs and leaves of the fresh basil. The taste resembles beef liver. Those brave enough to taste an exotic dish have to consider that half-formed bones and a cartilage of an embryo make a weird crunch, while you chew. ... Complete sights collection 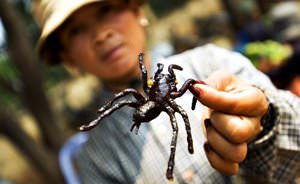 Cambodians also do not shun lavish gifts of nature. One of the most common options for street food in this country are fried tarantulas. Fortunately, because of the hot climate the country doesn’t experience the lack of delicacy. Large quantities of tarantulas are crawling everywhere. Once, local people have started to eat spiders because of the lack of other food. For many years, they coveted a dish so much, that even today it remains at the peak of its popularity.
Spiders are fried whole in a large volume of oil, then spread on a large dish. A huge plate with a pile of fried black spiders can be seen at all the major markets of Cambodia. The dish became a favorite delicacy not only for many local residents, but also for tourists. Gourmets who dared to taste the fried tarantula, note that the top is very crisp, and the meat is very soft and sticky.
Ping, which is the local name of fried spiders, reached a huge popularity in 60s of the last century, when Cambodia suffered from a mass starvation. Local residents could do nothing, but catch spiders crawling all over the place, fry them, and eat. Today, tarantulas are cooked in a more complex way. Beforehands, they are soaked in the marinade of salt and sugar. Before frying, a little garlic is added to oil. These simple seasonings gives the dish juicy shades, as tarantulas cooked without spices are completely tasteless. ... Complete sights collection 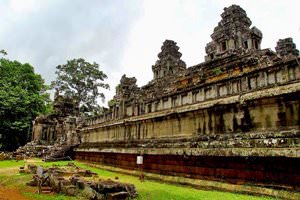 The construction of the Ta Keo Temple began in the late 10th century. It was built by the order of King Jayavarman V. He ordered to build a huge temple in honor of the God Shiva. However, it was not possible to fully complete the construction. It remains unknown for what reason the construction of the luxurious temple was suspended. According to some assumptions, construction work was suspended by the king's heirs after his death. They decided to leave the temple as it had become in the years of the founder's life. They did not want to assign the merits of the founder of the temple.
Even though the oldest building remained unfinished, it never ceases to amaze with its grandeur and beauty of decoration. The Ta Keo Temple is very large. You can see the elaborate carvings and design elements preserved after fifteen hundred years on its walls. The temple is shaped like a pyramid. Its height is 22 meters. It is noteworthy that it is completely built of sandstone. There are only a few units of such temples in the country.
You can visit some preserved sanctuaries as part of the tour today. They are not distinguished by a rich artistic design. But you can see ancient sculptures and other design elements in each of the sanctuaries. Their age is more than a thousand years. The building is characterized by a rather complex structure. It is not possible to enter some of the temple's galleries. The temple is surrounded by beautiful gardens at the top of the hill. Scenic panoramic views of the surrounding area can be enjoyed from the surrounding area. ... Complete sights collection 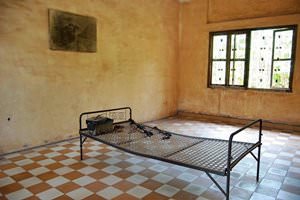 Prison Toul Sleng is located in Cambodia. It is better known as Toul Sleng Genocide Museum today. The prison was founded by the Khmer Rouge in 1975. Prison cells were set up in the old school building. The prison worked only for four years. But Toul Sleng is considered one of the most terrible prisons in the world. More than 17,000 people were incarcerated during this period. Only a few of them managed to leave it alive. Terrible tortures and executions were carried out in prison. It was closed after four years of operation in 1979.
The Genocide Museum was opened there a year later. Tourists from all over the world visit it daily today. The prison was deliberately not reconstructed after closing. The entire situation remained unchanged in the surrounding area. There are fences entangled with barbed wire everywhere here. There are also buildings with dilapidated facades and bars on the windows. Tall palm trees and other plants make an amazing contrast to the oppressive environment. There are a lot of plants on the territory.
Special signs are attached to all the buildings of the museum. They remind visitors to refrain from smiling during the tour. Stands with photos of people who died in prison are installed in some of its halls. There are large glass containers in one of the halls. The Khmer Rouge and former prisoners' clothing is kept in them. The children's school was located in these buildings before the prison was opened in them. It was called Tuol Svay Prey. The prison was named S-21 with the beginning of the Khmer Rouge regime.
The museum was opened here. It is considered one of the scariest and most impressive in the world. It is strongly not recommended to visit it for people with the weak mind. Information stands with posters are placed throughout the museum. They illustrate the terrible torture of prisoners. The skulls of the people who died within the walls of Tuol Sleng prison recently are carefully placed in glass cabinets in some rooms. Watching a documentary is a mandatory part of the tour. It is dedicated to the history of the prison. ... Complete sights collection
This article about unique points of interest in Cambodia is protected by the copyright law. You can re-use the content, but only under the condition of placement of an active link to www.orangesmile.com.
Cambodia guide chapters 1 2 3 4 5 6 7 8 9 10 11 12

All unique landmarks of Cambodia on the map 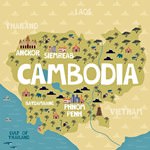 Photogallery of landmarks of Cambodia

Trip ideas for regions of Cambodia

Siem Reap
The nearby village of Meychrey Floating is really a unique place that all Siem Reap guests should visit. Local residents built their houses on high piles directly on the shore. Lush tropical thickets grow close to the shore zone. During tide surges, the tropical forest is flooded, so the main mean of transport here is boats. Tourists will be definitely offered to boat among exotic trees, so all family members will certainly like such entertainment. Among unusual entertainment venues, the … Read more

Phnom Penh
In Phnom Penh, there is also The Olympic Stadium where the most interesting sports competitions are regularly held. The visitors of the stadium can swim in the indoor pool. For the guests’ convenience, there are several comfortable cafes in its territory. Active travelers are recommended to visit the paintball club Mezzanine. It offers its clients a wide spectrum of services for a pleasant pastime. Even the big group of friends can have a good time here. One of the most unusual … Read more