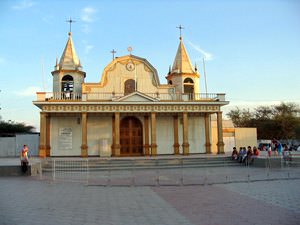 Albania is dominated by a continental climate in the north, and a Mediterranean climate in the south. The variability and high contrast of climatic conditions in Albania is due to the presence of two seas and a mountain relief on its territory. After all, three quarter of the entire territory is on the mountains. If we talk about the climatic zones, then temperate climate prevails in the country. It is characterized by a fairly warm and comfortable summer, and a mild winter with high humidity. Summer in the country lasts for about five months, beginning around the end of April up until mid-October. July is considered to be the hottest month. In the southern parts of the country, the maximum temperature is about 33°C.
State construction and political life of Albania
In 1946, Albania was recognized as an independent people’s republic. It was in this same year that the Constitution of the country was created and …
Read further
In the central regions of Albania, the temperature is a little lower and precipitation on the contrary, falls more. Large fluctuations in temperature are observed in the northern regions of Albania, with amplitude of 10-15°C. A prolonged drought can be dramatically replaced by a three-day thunderstorm with gusts of wind of destructive force. With the onset of winter, the amount of precipitation increases throughout the country. The average temperature during this period is 12°C in the daytime and reduces by about 7-8°C at night. The temperature of water is 17°C and humidity level is 75%. With the commencement of January, rainy days increase. An average of about 130 millimeters of precipitation is recorded. At the end of February, the temperature rises a little. In March, mean temperature is 16°C. In the mountainous regions, the temperature rises to zero degrees.
In April, the air temperature can get up to 19°C, and the water heats up to 17°C. By early May, summer weather is already being felt; a temperature of 25°C is recorded. On the South coast, the air temperature is 27°C and the probability of it raining is the lowest. In July, fixed temperatures are recorded. In the southern regions of the country, daylight lasts for 15 hours. With the onset of autumn, the temperature gradually decreases and wind appears. In October, night temperature may go less than 10°C. Rains begin and in a month, at least 110 millimeters of precipitation falls. In November, the warm weather is replaced by piercing coolness accompanied by strong flurries, rainy weather. In the last days of November, the rainy season begins. Copyright www.orangesmile.com

Top periods for vacation in Albania 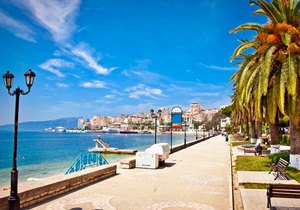 First of all, people come to Albania for a wonderful beach holiday. Officially, the beach season starts from the middle of May and lasts until the end of September. The heat here during this period is not exhausting, so you can relax on the coast, even with children. The highest temperature is recorded in late July and early August. You can economize on a beach vacation in October. However, it rains during this period and this could ruin your trip. Fans of sightseeing vacation can enjoy the historical, cultural, and natural attractions of the country for a fairly long period, from early April to mid-November. The smallest influx of tourists is recorded in March, and thus there is an opportunity to save some money during this time.
Overview of the optimal transportation means in Albania
Albania has a fairly comfortable and extensive system of transport connections, as it is focused on receiving tourists. That notwithstanding, most …
Read further
Albania is frequented by ecotourism enthusiasts. It possible to enjoy Albania recreational opportunities all year round in the direction of ecotourism, thanks to its natural conditions. In the southern regions of the country even in winter, the temperature does not drop below 5 degrees Celsius. Albania has created excellent conditions for revitalization, as there are several delightful thermal springs. We recommend visiting such places in the summer months. Food in Albania is part of her culture. It is best to visit Albania on the basis of gastronomic tours in July, August and September, when there is an abundance of local vegetables and fruits in the country’s markets, as well as rams and goats. At the end of autumn, you can taste great fresh Albanian wines. 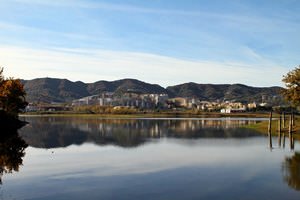 Fans of sea hunting and fishing come to Albania in the summer, as well as late winter and early autumn. For the sake of active recreation, it is worth coming to Albania in spring or autumn. The abundance of canyons and mountain rivers make it possible to organize excellent entertainment, including kayaking. Off-road hiking and rafting are popular activities. Diving enthusiasts often choose the beginning of autumn to visit. If you want to get closer acquainted with the local mentality and enjoy the color of the country, it is worth choosing this destination during the New Year’s and Christmas holidays. Only in the northern regions does it snow. Nevertheless, even in the gloomy and cloudy southern towns of Albania, you can enjoy the magnificent hospitality of the local population, visit bright festivals and New Year’s holidays, and savor a great Christmas dinner at one of the local restaurants.

1. You can zoom in to Albania using the '+' button, or check temperatures around the globe by the '-' button.
2. Besides this, you can grab the map by your mouse button and move it to see the temperature in other regions.

This article about climat and travel seasons in Albania is protected by the copyright law. You can re-use the content, but only under the condition of placement of an active link to www.orangesmile.com.
Albania guide chapters 1 2 3 4 5 6
Country maps

Sightseeing of Albania in photostream