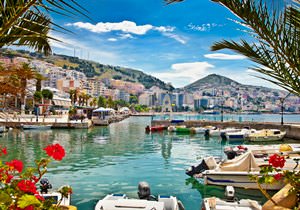 Albania has a fairly comfortable and extensive system of transport connections, as it is focused on receiving tourists. That notwithstanding, most Albanian roads are very narrow and have poor surfacing. There is not enough space for two oncoming cars. Road signs are extremely few, and due to the fact that Albania is dominated by a mountainous terrain, there are a lot of complex and dangerous mountain spiral highways here. Even in large cities, traffic lights are often absent or do not work at all. It is for this reason that car rental services are not very popular in the country.
Albania sightseeing - top places to visit
Albania is a country of rich heritage, wonderful nature and appealing culture. Every city of Albania is home to numerous places of interest and …
Read further
The main types of public transport, which runs within cities and between regions, are buses and taxi-vans. Generally, you can become familiar with the bus schedule at major city bus stations or ask any of the locals. The bus service reaches almost all remote regions of the country, although the trip often takes a lot of time due to the presence of serpentine roads going along the slopes. If there is the need to quickly get to a desired point, you can employ the service of a taxi. 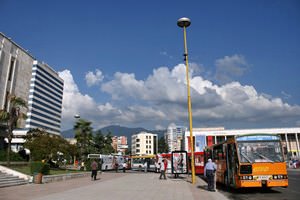 Railway transport in Albania plays a huge role in terms of passenger traffic. Construction of the first railway began in the postwar years of the last century. At present, the length of the railway is not too long, only about five hundred kilometers. That said, it is worth considering that the railway transport moves rather slowly, with an average speed of 40 kilometers per hour. Also, you should know that the trains are not very comfortable and clean.
Best visiting periods - the climate of Albania
Albania is dominated by a continental climate in the north, and a Mediterranean climate in the south. The variability and high contrast of climatic …
Read further
Tourists will not be able to move around the country via air transport. This is due to the fact that Albania has a fairly small area, most of which is covered by mountains, not intended for takeoff or landing of aircrafts. There is only one international airport in the country, which is located in Rinas. On the other hand, the water transport is quite well developed. Here you can travel not only along the coastal regions of the country, but also go to neighboring Italy or Greece. In addition, there are ferries, cruise liners, boats, yachts, as well as sightseeing boats and catamarans here. Water transport also cruises along the Buyana River. There are even several voyages of international ferries.

Most of the territory of Albania is covered with mountains and is not suitable for building the airports. It is for this reason that air transport is finding it very hard to develop. Five airports have been built throughout the country, and only one of them is of international standard. The remaining airports are used for cargo transportation. There is no domestic air connection in Albania. The international airport is located near the city of Rinas. You can get from the terminal to the city using public transport, transfer or taxi. The distance is about 18 kilometers. In this case, it is best to book a taxi in advance and from a licensed taxi company. By so doing, the trip will cost no more than 20 Euros. Copyright www.orangesmile.com
Albania economy - strengths, wealth and problems
Albania’s economy has gone through better years. A few decades ago, the country simply did not have enough money for the re-equipment of certain …
Read further
Albania today is connected with many European countries by air. Mother Teresa’s airport works closely with more than two dozen international airlines, the largest of which are Turkish Airlines, Albanian Airlines, Austrian and others. The airport’s infrastructure is well developed. Here you can find comfortable recreation areas in which passengers can easily put up while waiting for their flight. In addition, free internet connection is provided, so you can use your gadgets while waiting. If tourists want to have a meal, the terminal is ready to offer several exquisite restaurants. These establishments prepare not only local, but also European cuisine, thus tourists will have choices. 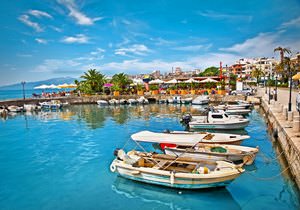 You can have a quick snack in a café. There are also several bars here. You can pass the time shopping in supermarkets, and there are quite a lot of them on the territory of the terminal. There is a fairly large duty-free shop here. Also at the airport named after Mother Theresa, you will find ATMs, currency exchange offices and two branches of international banks. There is also a car rental agency, where you can even book a taxi or transfer. There is a travel agency where you can get acquainted with various tours available in Albania. For baggage check-in and customs control, it is necessary to arrive at the airport at least 3 hours before departure. Upon arrival in the country, you need to provide a valid visa, as well as pay a single fee of 10 Euros. 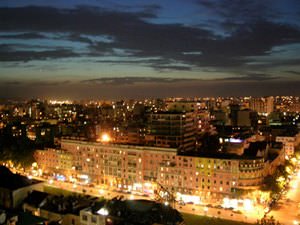 This article about transportation in Albania is protected by the copyright law. You can re-use the content, but only under the condition of placement of an active link to www.orangesmile.com.
Albania guide chapters 1 2 3 4 5 6