Sightseeing in Acre - what to see. Complete travel guide 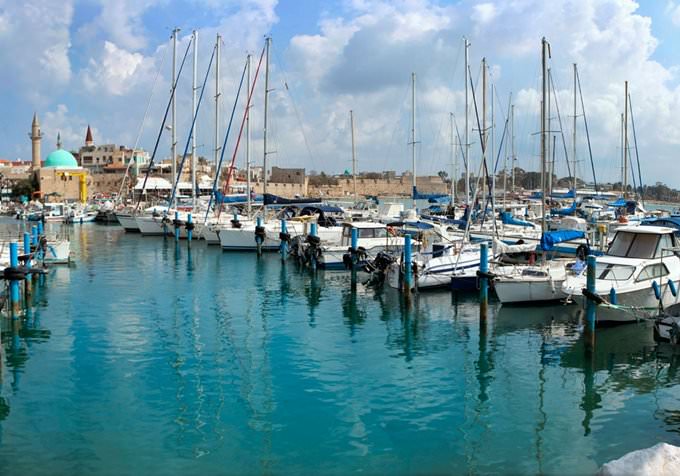 A pleasant journey awaits you if you decide to visit the city of Acre (Akko) in Israel. This is a relatively small but, nevertheless, an interesting city. The hidden Israeli gem is situated in the northern part of the valley that shares the same name with the city. While taking a stroll in Acre, visitors will notice the width of local streets. They are quite narrow and still have their original look. Despite this fact, all buildings look spectacular regardless of their age. Tourists will find it interesting to visit colorful markets, the old port, and shops that sell fish. This is also the right place to relax at wonderful beaches of the Mediterranean Sea covered with soft sand. It is so pleasant to walk here or sunbathe under tender rays of Israeli sun.
The first settlement at the site of modern Acre appeared approximately in 3000 BC. Acre became one of the first cities conquered by Thutmose III during his military campaigns. When Alexander the Great conquered this territory, Greeks started settling in the region. At that time, there were no Jews in the ancient city. Only when Muslims managed to make Acre their own, the Jewish community started developing here. Later, the Crusaders claimed their authority over Acre, turning it into one of the leading trading centers. Starting from 1291, Muslims recaptured Acre thanks to the Mamluk invasion.
This was the most difficult period in the history of this region because the settlement was very poor. People lived in misery and could barely keep themselves alive. However, wars didn’t stop in the territory of modern Israel. For centuries, the city continuously “changed” its rulers. In the end, Acre became a part of Israel, and the period of wars ended. This event took place in 1948. Copyright www.orangesmile.com
There are several versions regarding the etymology of the city’s name, but most of them sound more like a fairytale. One legend says that when the ocean was created it was expanding greatly until it reached Akko’s walls. This is how the city got its name, which, in accordance with this version, means “up to here”. Another legend mentions an herb with healing properties that grew here. This herb helped Hercules to cure his wounds. 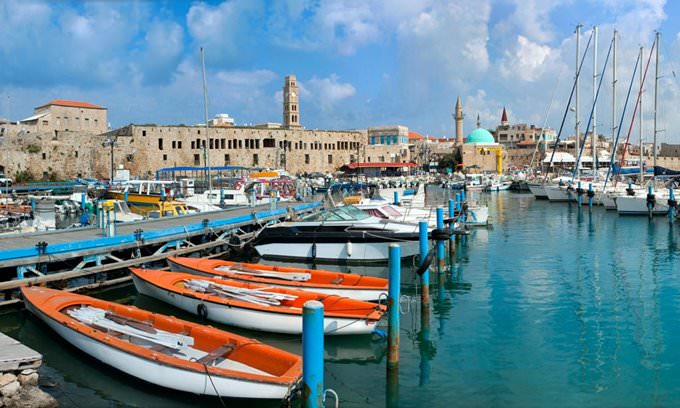 The majority of Acre’s population are Judaists, so traditions of this religion are dominant in the region. The most important tradition is to respect the Torah and Saturdays. On Friday evening, all shops close until Sunday. This rule doesn’t apply to shops run by people of other religions. For example, Arab merchants can close their shops on Friday, and Christian shop owners usually have Sunday as their day off. However, there are not many shops of the latter two types.
The cuisine of the city of Acre in Israel is a combination of several cultures: Sephardic cuisine famous for its spicy and fragrant dishes, and Ashkenazi cuisine that is more popular with European nations. Jewish people prefer to eat kosher food. Having visited one of local kosher restaurants, you will not find food that contains pork and shell-fish. Needless to say that fans of other cuisines of the world – Chinese, Arabian, Italian, French or Russian – will surely find a charming restaurant or café to satisfy hunger. 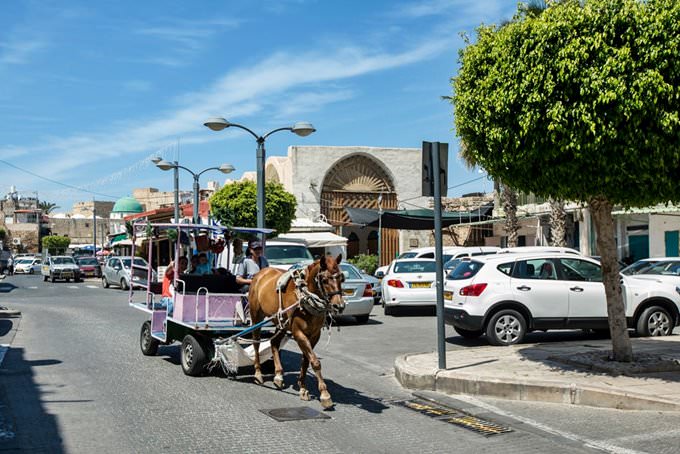 Acre is a true treasure for tourists and guests of the city. The territory of Acre is like one big attraction. Everything here reminds of the old and rich history of this region. Families particularly enjoy taking a stroll on the streets of the city, looking at beautiful vases by Arab craftsmen, hookahs, and coffee brewing pots. Acre is incredibly rich in different items that look unusual for many European nations. During a walk in the city’s streets, tourists can reach the waterfront and enjoy a yacht ride for a moderate price.
As Acre is built along the Mediterranean Sea, local beaches are incredibly attractive and never stop luring new guests by their warm sand and hot rays of Israeli sun. Do you like walking on pebble, enjoying the massage-like effect? There is a pebble beach to the north of Acre. Local coastal water is clean and is suitable not only for adults but also for children. Argaman Beach and Palm Rimonim Hotel’s Beach are among the most famous and popular beaches in the area. 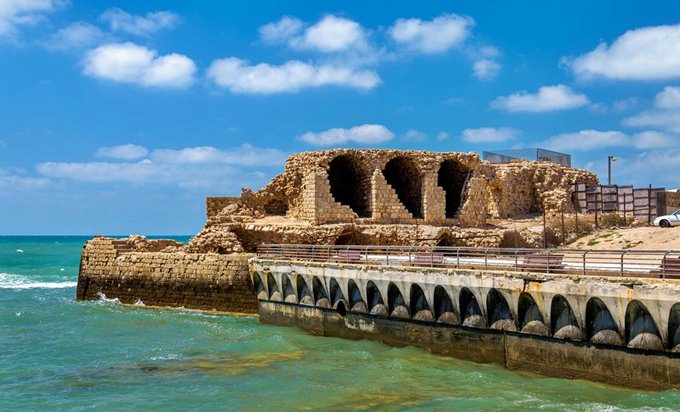 Argaman Beach is paid for foreigners, but it has a well-developed infrastructure. At this beach, guests can use sun loungers, visit one of numerous restaurants, and rent different beach gear. Palm Rimonim Hotel’s Beach is a part of the hotel complex. The beach is free for guests of the hotel. Everyone else needs to pay a fee to enter.
It is easy to reach Acre from another Israeli city, Haifa. Simply take the bus 251. It is also possible to arrive by train. A bus ride will be a bit longer, approximately 45 minutes, but this is a wonderful opportunity to see the suburbs and mesmerizing nature of the country. The train is faster and will take you to Acre in just 30 minutes. However, passengers need to stay alert and check all stops carefully in order not to miss the one they need because Acre is not the final destination.
This guide to iconic landmarks and sights of Acre is protected by the copyright law. You can re-publish this content with mandatory attribution: direct and active hyperlink to www.orangesmile.com.

National and city parks around Acre
♥   National Park 'Montfort' , 15.9 km from the center. On the map

Sights around Acre from our guide 'Extreme places on Earth' Distance from Acre center - 51.2 km.
Caesarea is remarkable not only for its wonderful amphitheater. In the immediate vicinity of the main attraction of the city there are many other historical buildings. Archaeologists have discovered sites of ancient temples, Roman baths and ruins of once luxurious palaces, as well as an ancient race track, which also hosted the most spectacular events. … Read further

Search touristic sites on the map of Acre

Sightseeing in regions nearby Acre

Haifa
It’s a well-known tourist center, and one of the largest cities in Israel. The rest in Haifa is diverse and fascinating. You will find here beautiful beaches, wide choice of excursions and cultural programs, interesting markets and modern shopping centers - all these factors attract travelers from all over the world. Local beaches are widely known as the purest and most ... Open »
Nazareth
Nazareth is considered a city in which Christ spent his childhood. This is a major center of pilgrimage, which attracts visitors primarily by its history and religious landmarks. The Temple of the Annunciation built in 1969 is one of the most important religious places of interest. The lower level of the Temple is a grotto where once lived Virgin Mary. The interior simply ... Open »
Netanya
The city is located near Tel Aviv, in a valley named Sharon. It won’t be an exaggeration to say that this is one of the most beautiful cities in Israel. Netanya is rich in greenery, decorated with fountains and sculptures. This city traditionally keeps the atmosphere of grandeur and holiday. This place will never leave indifferent any beach lover and sport enthusiast. The ... Open »
Petach Tikva
In 1878 the immigrants from Israel founded a small farming village that got the name Em Ha'Moshavot, which could be literally translated "mother of villages". The village grew steadily and became more and more respectable place, so here appeared first machine-building plants and factories. In 1937 the settlement received the status of a town and became known as Petach Tikva. ... Open »
Tel Aviv
Old Jaffa is the historical center of the city. Here you can find art galleries, ancient churches, shops, and souvenir shops, as well as best bakeries in the city, which offer traditional bread with spices. Art lovers should make a visit to the district named Neve Tzedek. Here lived and created their masterpieces numerous prominent Israeli artists. Nowadays several museums ... Open »

All about Acre, Israel - sightseeings, attractions, touristic spots, architecture, history, culture and cuisine. Prepare your trip together with OrangeSmile.com - find out the 'must see' things in Acre, which places to visit, which excursions to take, where the breathtaking views are waiting for you. Planning your trip with this travel guide will help your to get the most out of Acre in few days.