Sightseeing in Nazareth - what to see. Complete travel guide 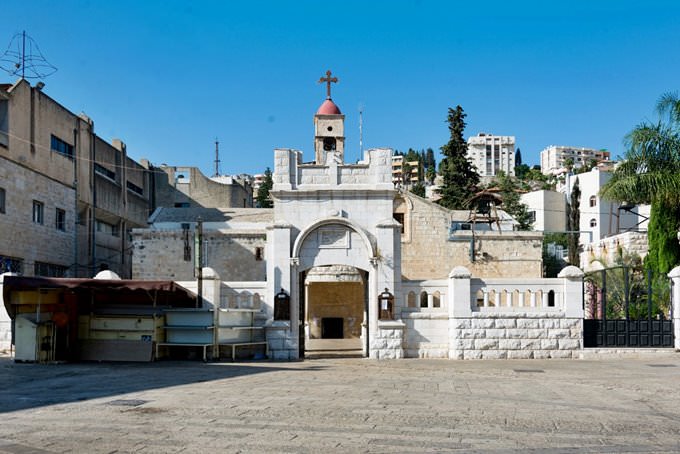 The Temple of the Annunciation built in 1969 is one of the most important religious places of interest. The lower level of the Temple is a grotto where once lived Virgin Mary. The interior simply strikes visitors by its elegance and refinement; here you will see ceramic bas-reliefs, fine mosaics, and beautiful frescoes. In close proximity to this church is located one more remarkable building - the church of the Archangel Gabriel. The building of this church took place in the 17th century. This religious facility is as good as the temple in terms of beauty and grandeur.
During the preparation for the celebration of the 2000th anniversary of Christianity, the historic region of Nazareth was modified heavily. First of all, it was turned into a pedestrian zone and all traffic was completely blocked. In addition to this was developed a new system of sightseeing and pilgrimage routes. While walking along beautiful streets of Nazareth, you can enjoy the panorama of the city and observe its main sights.
The "Nazareth Village" is one of the most ambitious projects of the region. The creators of the village tried to restore the look of the settlement 2,000 years ago in the borders of the modern city. For this purpose numerous buildings were constructed on the territory of the village. Clay and sandstone blocks were used as main building materials. On the territory of the village were also built several terraces, and were planted fruit trees and vineyards. Copyright www.orangesmile.com
Besides the fact this city is famous for its rich religious and historical heritage, Nazareth is also well-known for its mineral springs and beautiful nature. Here you will find numerous lakes and ponds, forests and parks that are perfect for walking. Some tourists even prefer camping on the shore of one of the local lakes and dive into an atmosphere of tranquility and seclusion. 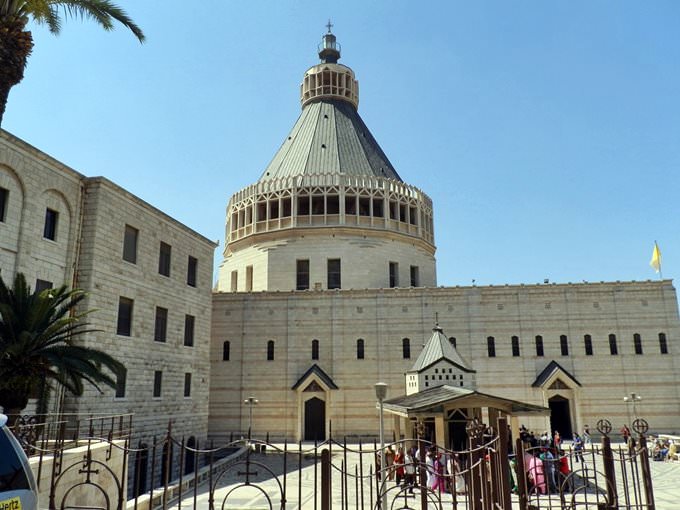 An important religious shrine for all Christians is Mount Tabor located in the immediate vicinity of Nazareth. The height of the mountain is 588 meters, it is remarkable for its regular round shape. According to the Gospel, the very Transfiguration of Jesus took place on the top of this very mountain. Once there was a small temple on the top, but it was destroyed in the Middle Ages. Subsequently, two monasteries were built on its site, which are open to all pilgrims even now.
In addition to Christian shrines, there are also Muslim sights in Nazareth, and the White Mosque is a great example. It is the oldest of the city's three functioning mosques, its construction lasted 30 years and was completed in 1815. The mosque features the classic Ottoman style, from the inside it is decorated with traditional elements and chic handmade carpets. 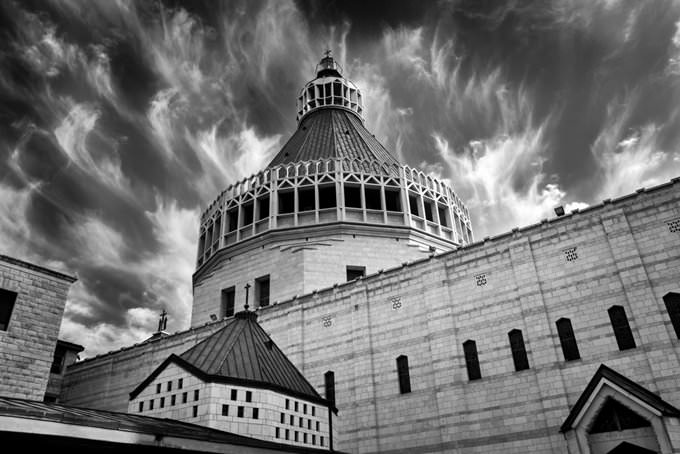 Not far from Nazareth is the unique historical site of Sepphoris where the ruins of the ancient city of the same name were discovered. The first mention of the city dates back to the 1st century AD. During the reign of Herod the Great, it was a large flourishing capital. After several strong earthquakes, the city fell into decay and was completely devastated by the Crusaders. Today, visitors to the archaeological site can see remaining fragments of the fortress wall, as well as the ruins of palaces once belonging to wealthy residents of the city.
An important Catholic sight is the Church of St. Joseph, the very first church on its site was built during the Byzantine Empire. In the 12th century it was destroyed by the Crusaders, and in the middle of the 18th century, a small chapel was built on the ruins of the ancient temple. Converted into a temple in 1914, today it is a vivid example of the Romanesque style. Many people visit this temple just to admire its century-old frescoes and see the beautifully colored stained-glass windows. 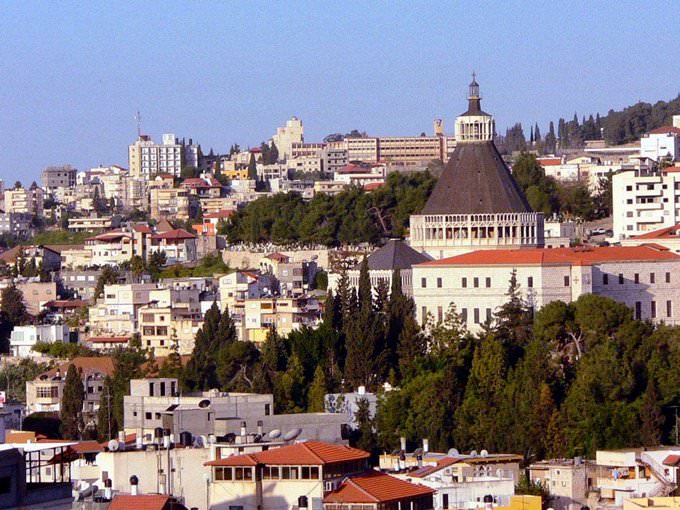 The miniature Mensa Christi Church is another important tourist attraction. It houses an important Christian shrine - a slab of granite. According to tradition, after the resurrection of Jesus, it served him as a dinner table. Several years ago, the reconstruction of the church was completed, during which its ancient frescoes were restored.
This guide to iconic landmarks and sights of Nazareth is protected by the copyright law. You can re-publish this content with mandatory attribution: direct and active hyperlink to www.orangesmile.com.

National and city parks around Nazareth
♥   National Park 'Hamat teverya' , 24.9 km from the center. On the map

Art galleries in Nazareth and around
♥   Art museum 'Hecht Museum' Haifa, 26.8 km from the center. On the map

Sights around Nazareth from our guide 'Extreme places on Earth' Distance from Nazareth center - 66.7 km.
Subsequently, the building was repeatedly destroyed and rebuilt again in the course of military conflicts. The church, which contemporaries can visit today, was built in 1860. The facility itself is as amazing, as the shrine hidden in its walls. Premises are decorated with many beautiful canvases depicting biblical motifs, artful murals and numerous priceless artifacts dating back for hundreds of years. Those who decide to visit the ancient Greek church, have to consider that it’s officially banned to make photos inside. That can be done only with the prior consent of the abbot. … Read further Distance from Nazareth center - 44 km.
Caesarea is remarkable not only for its wonderful amphitheater. In the immediate vicinity of the main attraction of the city there are many other historical buildings. Archaeologists have discovered sites of ancient temples, Roman baths and ruins of once luxurious palaces, as well as an ancient race track, which also hosted the most spectacular events. … Read further

Search touristic sites on the map of Nazareth

Sightseeing in regions nearby Nazareth

Haifa
Baha’i Gardens located on the Carmel Mount, are one more wonder of nature. These are hanging gardens that grow in eighteen spacious terraces. The terraces are divided by beautiful statues, fountains and walkways. The central part of the garden is the location of another famous religious site - the mausoleum of Sayyid Ali Mohammed. This mausoleum is known as a famous place of ... Open »
Acre
A pleasant journey awaits you if you decide to visit the city of Acre (Akko) in Israel. This is a relatively small but, nevertheless, an interesting city. The hidden Israeli gem is situated in the northern part of the valley that shares the same name with the city. While taking a stroll in Acre, visitors will notice the width of local streets. They are quite narrow and still ... Open »
Netanya
Tourists, who enjoy making excursions to ancient monuments, should go to the old Palace. It is located on a picturesque reef that features magnificent panoramic views of the city. You can get acquainted with the beauty of the local nature in the national park called "Caesarea". Numerous museums of Netanya exhibit collection of priceless artifacts so don’t miss to visit them. ... Open »
Petach Tikva
In 1878 the immigrants from Israel founded a small farming village that got the name Em Ha'Moshavot, which could be literally translated "mother of villages". The village grew steadily and became more and more respectable place, so here appeared first machine-building plants and factories. In 1937 the settlement received the status of a town and became known as Petach Tikva. ... Open »
Tel Aviv
Old Jaffa is the historical center of the city. Here you can find art galleries, ancient churches, shops, and souvenir shops, as well as best bakeries in the city, which offer traditional bread with spices. Art lovers should make a visit to the district named Neve Tzedek. Here lived and created their masterpieces numerous prominent Israeli artists. Nowadays several museums ... Open »

All about Nazareth, Israel - sightseeings, attractions, touristic spots, architecture, history, culture and cuisine. Prepare your trip together with OrangeSmile.com - find out the 'must see' things in Nazareth, which places to visit, which excursions to take, where the breathtaking views are waiting for you. Planning your trip with this travel guide will help your to get the most out of Nazareth in few days.