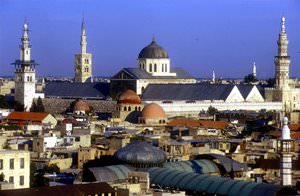 One of the oldest cities in the world can be found in Syria. Damascus has gained worldwide fame through its interesting and culturally rich history. The age of archaeological artifacts discovered during exploration of the city is about 12,000 years. Those are evidences of first settlements. However, a major city was founded on the site of Damascus much later, in the 15th century BC. Aramean tribes are considered its founders.
Modern Damascus is the capital of Syria, and the second most populous city in the country, standing on its territory is home to about 1.5 million people. The primary interest of tourists is Old Town surrounded by fortification walls, the construction of which took place during the reign of the Roman Empire.
These walls hide numerous ancient monuments of world importance, as well as the picturesque Via Pecta, the first mention of which belongs to prehistoric times. In memory of the medieval period, excellent madrasah and markets have remained in the city. Damascus can boast Bzura spice market and the world famous Souq al-Hamidiye. The atmosphere of historic quarters and colorful markets of the city has remained unchanged for hundreds of years. New amazing traditions also appear in the frame of the city; recently its picturesque Tishreen Park has become the permanent venue for the charming Festival of flowers. ... Complete sights collection 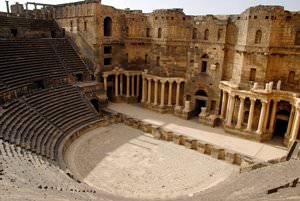 The main historical symbol of the Syrian city of Bosra is an ancient amphitheater, which was built in the 2nd century AD. The ancient amphitheater, designed for 15000 spectators, was built from black basalt, the most common building material for these places. The ancient arena, like many other similar structures, is distinguished by its unique acoustics. Despite its greatness, 200 years after the construction, the amphitheater began to lose its primary importance.
In the 5th century it was supplemented by a number of fortification structures. Powerful fortress walls were built, the construction was surrounded by a deep moat. From an architectural point of view, the amphitheater in Bosra is a rather unusual building. Unlike many Roman amphitheaters, it was built not on the mountainside, but apart. For several years, the ancient theater has been a permanent venue for the Folklore Festival, and in one of its restored towers an interesting museum dedicated to national culture was opened.
Tourists, who want to visit the most important cultural event in the amphitheater, are to travel to the ancient Syrian city in September. Those who visit the city at other times can participate in an exciting excursion. Trips from Damascus to Bosra are very popular. Near the amphitheater is a lot of interesting ancient monuments, including renovated Roman thermal baths, as well as ancient mosques. ... Complete sights collection 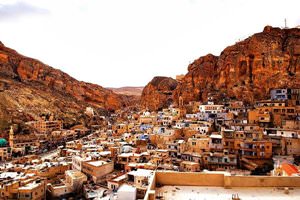 Those who are interested in the history of the Christian culture are recommended to visit ancient settlements in Syria. Saidnaya and Maaloula are excellent examples of communities that were able to save not only the priceless Christian places of interest, but also a unique way of life. These small villages are very close to each other, so as part of the tour travelers usually visit them together.
According to the latest data, the population of Maaloula is not more than 1 000 people; about 2/3 of their number are Christians. This picturesque mountain village can boast with the Mar Thecla monastery that is famous far beyond the country. The monastery is carved in the rock. Its main feature is a small cave with a chapel. According to one of the ancient legends, relics of St. Thecla are kept in this chapel, which was built during the time of the Byzantine Empire.
Another important Christian site, the Monastery of Saints Sergius and Bacchus, is situated at the top of the mountain above the village. Unfortunately, in recent years, armed clashes have led to the destruction of many religious monuments, and priceless relics went looted. Saidnaya is also known for the ancient monastery named Convent of Our Lady of Saidnaya. This convent is the largest in the country. It is always available to visit. The monastery features an incredibly spectacular complex of architectural structures with landscaped courtyards, many beautiful stairways and covered walkways. ... Complete sights collection 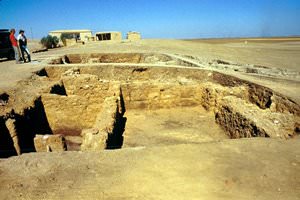 The ancient city of Hamoukar is a unique archaeological monument. It is located in the North-Eastern part of modern-day Syria. Official archaeological research began in the area in 1999. The best specialists from Syria and the United States participated in them. The version that one of the oldest cities in the Middle East was located in these places was confirmed in the course of these studies. The ancient city was founded in the 5th Millennium BC. It did not last long, only about 500 years. It was destroyed in the course of the next conquest.
Researchers believe that the surviving inhabitants of the ancient city founded new small settlements near the ruins very soon. Location a few large settlements were discovered in the vicinity of Hamoukar. The findings indicate that representatives of a highly developed civilization lived here. Some of the world's first craft workshops were found in these settlements. Pots were burned in them. If all the settlements found near the ancient city are united into a single locality, its area will be about 250 hectares.
The old city wall was the main object that was discovered in the archaeological area. It was an impregnable defensive structure with the same height and width – about 4 meters. The remains of pottery fragments were found under this wall. They are dated to the 4th Millennium BC. Researchers also found fragments of several old houses. They were built from strong clay bars. It is worth noting old houses and wells among the finds dating back to the 3rd Millennium BC. They were built of baked bricks. ... Complete sights collection
This article about unique points of interest in Syria is protected by the copyright law. You can re-use the content, but only under the condition of placement of an active link to www.orangesmile.com.

All unique landmarks of Syria on the map

Photogallery of landmarks of Syria

Trip ideas for regions of Syria

Damascus
Tourists who simply cannot imagine rest without shopping should definitely visit the street markets of Damascus. Souq al-Hamidiyyeh is considered the most popular market of the city. Such a variety of products can hardly be found in any other market of the country. Beautiful handmade crafts, traditional costumes, exquisite jewelry, antiques and lots of other interesting items that may interest tourists, are gathered in one huge market. In order to examine all outlets located here, you will need … Read more

Aleppo
The General Park or Aleppo Public Park is a charming and tranquil place. Today, the park looks exactly the same as before the war period. The park is incredibly beautiful and large. Multiple big trees provide the necessary shade that is so cooling and refreshing on hot days. The park’s landscaped design is another advantage of this place. Numerous flowers, decorative plants, and wonderful fountains make the park even more attractive. Local people visit the General Park to relax with their … Read more