Maps of cities and regions of Syria 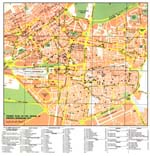 Interactive maps of hiking and biking routes in Syria

1. You can zoom in/out using your mouse wheel, as well as move the map of Syria with your mouse.
2. This interactive map presents two modes: 'Biking Routes' and 'Hiking Routes'. Use the '+' button on the map to switch between them.


Railway and landscape maps of Syria

This Syria map has two modes: 'Railway Network' and 'Landscape & Rural Map'. Use the '+' button on the map to navigate.

Maps of cities and regions of Syria

Damascus
Among walking fans, is very popular Mount Qasioun, whose height is 456 meters. At the top of this mountain is located a magnificent observation deck with which the magnificent panorama of the city opens. Experienced travelers recommend visiting this observation deck in the dark or at sunset; at this time it is especially interesting to admire the city. Mount Qasioun is also known for the fact that, on one of its slopes is an amazing cave. If you believe the ancient traditions, it is in this cave … Read more

Hama
Not far from Aleppo and Damascus, tourists can find a beautiful Syrian city – Hama. This city has a distinctive peculiarity that makes it stand from other cities of the country. This is Norias of Hama – an old irrigation system. It consists of wooden wheels that deliver water. For the reference, the diameter of these wheels is twenty meters. This is not the only interesting fact about this city. Hama definitely deserves the attention of tourists because a picturesque river that flows through … Read more

Aleppo
Aleppo is one of the oldest cities in the world and the most populous city in Syria. Many historic attractions of Aleppo are UNESCO World Heritage Sites. Famous archaeological sites in the suburbs of Aleppo attract both tourists and scientists from all over the world. Narrow and old streets with beautiful buildings, marvelous Arabic bazaars and restaurants, high-class hotels and numerous entertainment centers – this is what tourists will find in this picturesque city. According to … Read more

Bosra
If you head to the south from Damascus, you will find a miraculous city 120 kilometers from the capital. This is Busra or Bosra, a settlement that played an important role during the Roman Empire period. What is so unusual about the city and why should tourists visit it? Famous as a UNESCO World Heritage Site, the ancient city of Bosra mostly has black buildings. This is very rare for Roman ruins. Having arrived in Bosra and walked on its streets a bit, you might feel like you are in a night … Read more