Sightseeing in Hama - what to see. Complete travel guide 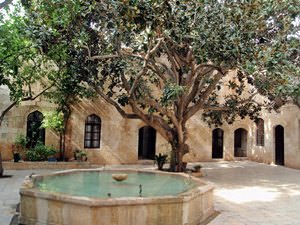 Not far from Aleppo and Damascus, tourists can find a beautiful Syrian city – Hama. This city has a distinctive peculiarity that makes it stand from other cities of the country. This is Norias of Hama – an old irrigation system. It consists of wooden wheels that deliver water. For the reference, the diameter of these wheels is twenty meters. This is not the only interesting fact about this city. Hama definitely deserves the attention of tourists because a picturesque river that flows through the city center, forming a gorgeous green waterfront with cozy gardens. Hama is not as populated as other Syrian cities, so this is a great place to relax in a silent and serene setting.
Scientists assume that there was already a settlement in the Hama region during the Neolithic and Iron Age. At that time, the settlement was called Hamat, which is not much different from the current name. Together with Damascus, this town formed the central part of the Aramaic kingdom. When Macedonia attacked Hama, the Syrian region got a new name – Epiphaneia. However, Macedonians couldn’t keep this territory for a long time and soon they had to give the region to a new owner, the Byzantine Empire. The crusaders remained rulers in Hama in the 12th century, but Saladin managed to capture it in the 80s of the 12th century. This wasn’t the last change of a ruler in Hama.
At the end of the 13th century, the Mamluks invaded the territory and conquered Hama. They remained the owners of the Syrian land until the 16th century. This time, it was the Ottomans who replaced the Mamluks. Needless to say, this was a tough period for local people as they were living in constant fear of new invasions. France took control over this territory during the years of World War I. Hama became a part of Syria only in 1941. Copyright www.orangesmile.com
It is simply impossible to visit Hama and forget to see a unique landmark that has made this city internationally famous – the Norias. This construction of ancient engineers is widely recognized as the main landmark of the Syrian city. In the past, these large wooden wheels were a part of the irrigation system that delivered water to fields. Ancient Egyptians and Persians were the main “users” of the norias. There is a curious fact about this construction – all wheels are made from different materials. Ancient engineers used different types of wood, so it could take centuries to make one noria. 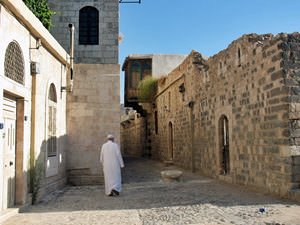 Each new wheel had its own name. In the past, there were roughly one hundred and twenty norias, but, unfortunately, only twenty have survived until modern time. Some of the norias are still in a working condition and can be used for irrigation. Naturally, no one does this in the world of advanced technologies, so the wheels serve a solely decorative purpose.
In the middle of the 6th century, Byzantine Emperor Justinian I ordered to build Qasr Ibn Wardan not far from Hama. This was not just a palace but a whole district consisting of several buildings – a palace, basilica, numerous barracks for the emperor’s army, and service buildings. Unfortunately, Qasr Ibn Wardan now mostly lies in ruins. However, even these ruins show how splendid and impressive the complex was in the past. 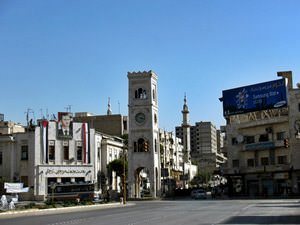 Buildings in Qasr Ibn Wardan are mostly made from black and yellow bricks. For this purpose, builders brought basalt from other countries. Marble columns and capitals in Qasr Ibn Wardan were delivered directly from Apamea. This city already ceased to exist by that time. Local builders spent much time and resources for Qasr Ibn Wardan because their plan was to make a secure complex that could protect the Byzantine Empire from alien forces.
The Nur al-Din Mosque or Jami' al-Nuri appeared in Hama in the 70s of the 12th century. If you look closer to the mosque, you will notice Arabian writing on its wall. The writing says that Nur al-Din ordered to build this mosque and Hama’s rulers agreed to make annual payments for students who studied in this “temple of knowledge”. There are two norias near the mosque. The building itself is made from light bricks and has an elegant pattern on its wall. It is better to visit Jami' al-Nuri in the evening because the illumination makes the mosque even more beautiful. 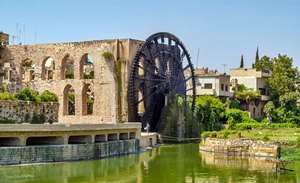 To get to Hama, tourists first need to arrive in Damascus or Aleppo. After that, you can always reach Hama by bus or train. A bus ride from the cities mentioned above will last roughly two and a half hours, and a train ride will be half an hour shorter. Besides the two main cities, it is possible to get to Hama from the nearby Syrian cities. For instance, it takes only forty-five minutes to reach Hama from Homs and one hour – from Idlib. If you choose to start your journey in Palmira, the ride will last three hours.
This guide to iconic landmarks and sights of Hama is protected by the copyright law. You can re-publish this content with mandatory attribution: direct and active hyperlink to www.orangesmile.com.

City tours, excursions and tickets in Hama and surroundings

Survived castles around Hama
♥   Castle 'Shaizar' , 22.3 km from the center. On the map

National and city parks around Hama
♥   National Park 'Mashgara' , 178.7 km from the center. On the map

Numerous magnificent monuments of the antique period, churches and monasteries, architectural complexes and museums remain the main attraction point for tourists in Syria. In the city of Aleppo it will be very interesting to visit an ancient fortress that is located on the main square. The fortress was built in the beginning of the 13th century; slowly more and more new buildings appeared near the fortress and in the end of the century it was already a big city instead of a small settlement. The fortress was a very important strategic point during the war with Mongolia. It successfully countered numerous attacks and managed to keep its original look. Nowadays, in the fort one can see old mosques, tombs, palaces and houses. … Open

Search touristic sites on the map of Hama

Sightseeing in regions nearby Hama

Aleppo
Both locals and guests of the city enjoy visiting the picturesque parks of Aleppo, and General Park is one of the most popular. This beautiful park is home to many rare species of plants and flowers. The park has a new landscaped design several times a year. There are many cozy and charming areas for fans of seclusion. General Park is also a great location for a photo-shoot. ... Open »
Byblos-Jbeil
The city’s bay is one of the most romantic places that tourists can attend during their stay in Byblos-Jbeil. Two guardian towers protect the bay. This is where vacationers can make an unforgettable sea ride that allows looking at the city from a completely new angle. Do you like scuba diving? You can always enjoy this activity because local diving centers offer diving gear ... Open »
Beirut
Beirut is a city with rich historical heritage. When you visit all main sights of it, you will learn whole history of the country, because Beirut is rich in sights of different epochs. Start your sightseeing from walking on the embankment. The locals often use it as a place for a picnic, and here you can see men who patiently smoke hookah or play backgammon. Sport lifestyle ... Open »
Damascus
The main place of interest of the city is Umayyad Mosque built in 715 by Caliph Al Walid. Currently this is one of the most highly valued mosques in the Muslim world. Near the mosque there is a separated place that keeps the head of Hussein and a hair from the beard of the Prophet Muhammad. Umayyad Mosque has a composition of unique mosaics made of gold smalt. Damascus is ... Open »
Gaziantep
Women will find it interesting to visit the museum of culinary – the first venue of this type opened in Gaziantep. The main hall exhibits tableware used for cooking different Turkish dishes that are traditional for this region. Besides that, there is much information about the local delicacies. This museum is a true pride of Gaziantep because Turkish cuisine is very diverse ... Open »
Protaras
As for the beaches, Protaras Beach remains the most popular and crowded one. Here you will find sports equipment rental centers, entertainment clubs for children, and several cafes where you can eat and take a break from the hot sun. Green Bay Beach is more secluded and quiet. The main entertainment offered to guests here are underwater hunting, fishing, and scuba diving. The ... Open »

All about Hama, Syria - sightseeings, attractions, touristic spots, architecture, history, culture and cuisine. Prepare your trip together with OrangeSmile.com - find out the 'must see' things in Hama, which places to visit, which excursions to take, where the breathtaking views are waiting for you. Planning your trip with this travel guide will help your to get the most out of Hama in few days.