Nature of Suriname - national parks and reserves for active recreation 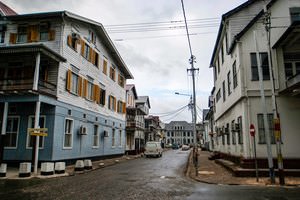 The hot tropical climate of Suriname is softened by good rains. February and March are always quite dry, followed by a long rainy season until August. Then comes the second dry season, and its last month, November, is always the driest of the year. A short rainy season lasts from December to January. February and March are the best months to visit Suriname, since at this time there are usually no heavy rains or strong heat, and tourists can enjoy the wonderful nature of the country with its parks, forests, reserves, and rivers without any weather obstacles.
Shopping in Suriname - best shopping places, what to buy?
Good shopping opportunities are always a nice bonus to vacations in any country. When there is a desire to buy something unusual and memorable, or …
Read further
Residents of Suriname care for the environment, the territory of this small country accommodates many protected areas. Brownsberg Nature Park located nearly a hundred kilometers from the capital is a peaceful place with a clean lake, a 500-meter plateau, and two beautiful waterfalls - a paradise for hiking enthusiasts. The park is home to many birds and animals like the red howler and the agouti. Brownsberg has been functioning as a nature reserve for half a century. Now it's really hard to imagine that gold was mined here in the 19th century.
The largest and most famous in Suriname is the Central Suriname Nature Reserve in the Guianan moist forests. It has the magnificent Raleigh Falls, a savannah, dense forests, marshlands, Table Mountain with a flat top, and the country's highest peak, Julianatop. Electric eels, jaguars, hundreds of bird species and an incredible number of other animals live in the reserve. Many of them are extremely rare, endangered or found only in South America. Clean air and freshness of the waterfall help to forget about dusty cities for a long time. Copyright www.orangesmile.com
When and where to 'hang out' in Suriname - festivals and celebrations
Surinamese celebrate generally accepted and well-known holidays like Christmas and Easter, as well as special ones, reflecting the country's unique …
Read further
Galibi Nature Reserve in Marowijne is famous for a huge number of turtles: olive ridley, green, leatherback, and hawksbill turtles. In order not to frighten them away, here it is very important to keep silence and take pictures without a flash. Turtle season lasts from February to August. Wia Wia Nature Reserve in Marowijne is also home to turtles and seabirds nesting in mangroves, including rare species like the scarlet ibis. Peaks conquerors must head to Kassikassima Mountain in the central part of Suriname. The mountain is perfect for climbing, and from its top, you can admire the splendor of Surinamese nature. 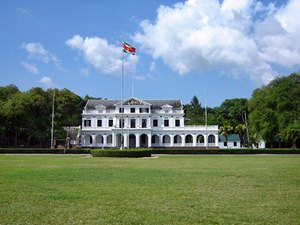 Along the Commewijne River in the north of Suriname, there are not only abandoned coffee and cocoa plantations, but also good cycling trails. Bicycles are available for rent nearby. Riverbanks are ideal for walking, and for a small fee you can book a boat tour and watch dolphins showing up here and there from the water and, in turn, watching tourists. In Albina, there is the river Marowijne, along which the bravest tourists ride - waters of this river flowing into the Atlantic Ocean are often choppy.
Suriname sightseeing - top places to visit
This interesting and picturesque country can offer more than magnificent nature. Travelers will find here unique architectural and historical …
Read further
Boat excursions are held on the Nickerie River in the port city of Nieuw-Nickerie. It is inhabited by river dolphins who are comfortable with people, and the banks are overgrown with jungle, which gives the journey a touch of “wildness” and isolation from civilization. Those who want to just take a walk and get acquainted with locals should go to Paloma village where about a hundred indigenous people live. Here you can spend the whole day - that's how idyllic houses on a hill covered with lush grass look. The village lies on the confluence of the rivers Paloma and Tapanahomi. 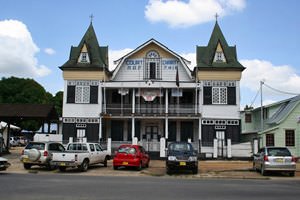 Meaningful tourism implies a careful attitude to nature, and all tourists should remember that not only their native countries' nature must be protected. The lands of small Suriname, waters of its warm rivers, clear lakes and noisy waterfalls, mountains and hills, lush forests and wetlands are all under the vigilant control of the government trying to protect and preserve natural resources and the huge numbers of living creatures that inhabit the country.

This article about nature and national parks of Suriname is protected by the copyright law. You can re-use the content, but only under the condition of placement of an active link to www.orangesmile.com.
Suriname guide chapters 1 2 3 4 5 6 7 8 9 10
Reference information
Map of all parks

National and city parks of Suriname
♥   Nature Park 'Brownsberg' . On the map 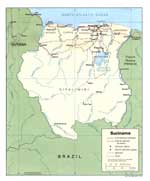