Cuisine of Sharjah for gourmets. Places for dinner - best restaurants 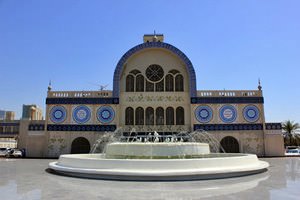 It is simply impossible to imagine vacations in Sharjah without a visit to one of the local restaurants; national food strikes with abundance of original and incredibly tasty dishes. Delicious meat dishes and fish specialties, plenty of savory herbs and spices, freshly baked bread and delicious side dishes are represented in ethnic restaurants.
Your active city break in Sharjah. Attractions, recreation and entertainment - best places to spend your day and night here
Sharjah is an attractive holiday destination for those who like shopping; walks around shops are among its top attractions. The Central Market is notable, as there are more than five hundred …

Open
Meat treats enjoy great popularity among foreign visitors, as local chefs cook dishes following special recipes. Traditional food, including kebab and harees, is often made of lamb. Various side dishes, including rice and specially cooked wheat, are serves as complement.
Kebab remains the most popular and beloved treat; you can taste it not only in national restaurants, but also at one of the street stalls that are ubiquitous in Sharjah. Roasted lamb meat with herbs and vegetables wrapped in a fragrant flatbread has made Arabic starters well-known to people from many different countries. Copyright www.orangesmile.com
Advices to travellers: what you should know while being in Sharjah
1. Fans of noisy entertainment and bars have to consider that there are no nightclubs and other entertainment venues in Sharjah. You mustn’t consume alcohol at the emirate; there are …

Open
Those preferring dishes of seafood also won’t be bored. Many local restaurants specialize in fish; they are ready to offer visitors a huge selection of treats of crab, lobster, tuna and shrimp. Every dish is sure to be served with specially cooked rice. Local desserts are particularly noteworthy; the most recognizable among them is Umm Ali. This is the local version of the bread pudding that can compete in popularity only with Eish es Saraya pie. 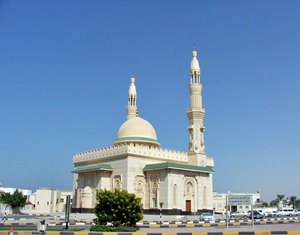 There is also a national drink here; no meal and no friend meeting can happen without a cup of fragrant coffee. Making coffee in Sharjah is considered an art, because there are no machines or instant coffee there. Particular attention should be paid to alcoholic beverages; you can drink them at designated areas only. Not many national restaurants serve alcohol; during major religious festivals almost all shops stop to sell liquors.

This guide to cuisine and restauraunt in Sharjah is protected by the copyright law. You can re-publish this content with mandatory attribution: direct and active hyperlink to www.orangesmile.com.
Sharjah - guide chapters 1 2 3 4 5 6

City tours, excursions and tickets in Sharjah and surroundings 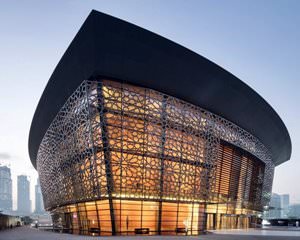 Distance from Sharjah center - 22.2 km.
Indeed, the traditional sailing boat "dhow" served as a prototype for the construction of the building. The chic glazed facade is considered the main feature of the building. Very spectacular lighting adorns the building of the theatre in the evening. Dubai Opera House is located in the so-called Opera District. Its formation began in the city center in 2012-2013. Numerous art galleries, design studios, and museums operate near the theater today. Fans of excursions love to spend time here. … Read further 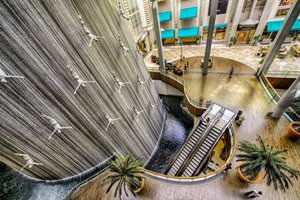 Distance from Sharjah center - 21.5 km.
A lot of tourists visit this shopping mall for buying exclusive jewelry of the highest quality in the biggest "golden market" is situated. There you will see 220 jewelry shops from the whole world. It is possible not only to buy the jewelry that fits every taste but also to order an exclusive jewelry of your own design. For vacationers with children there is a huge entertainment center KidZania. Admirers of nature will like the rest zone The Grove. … Read further 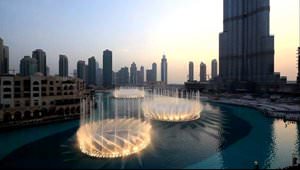 Distance from Sharjah center - 21.9 km.
The fountain was opened in 2009. The investment in the grandiose project has formed more than 200 million US dollars. The fountains with the complicated design can easily lift over 83 tons of water, and the illuminating beams can be seen from a distance of more than 30 km. The accompanying music of the fountain consists of several dozens of songs. The fairy shows take place daily and last 30 minutes. On the day you can watch some shows with different music accompaniment. … Read further 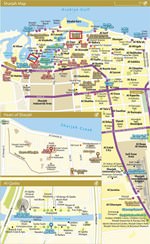 Searching where to eat - restaurants and cafe on Sharjah map

Cuisine and restaurants in the neighbours of Sharjah

Dubai
The choice of fish dishes is also quite impressive. In local restaurants tourists will find a variety of delicacies and exotic food. In addition to dishes guests will be often brought hot cakes, which are a local substitute for bread. Quite often the cake is baked in outdoor cafes right in front of visitors. Chefs can cook them with a variety of fillings. Cakes are served in ... Open »
Jumeirah
Numerous restaurants and cafes in Jumeirah are always ready to welcome their guests. Many popular dining establishments are open in large shopping centers and hotels. For example, The Alamo is a very interesting restaurant that specializes in meat dishes. The restaurant has a large wine list and regularly offers various promotions and entertainments to its guests. For instance, ... Open »
Ras al Khaimah
If you like fish, you can order fish platters or taste Bricki. It's made from fish, lamb, or shrimp. They are fried in a very thin puff pastry in the form of triangles. The dish is served with lemon and herbs. It is worth to taste also boiled salted fish al madrooba. It is cooked with spices and flour. The dish is served with sauce. Fish kebabs and fish stew are also ... Open »
Abu Dhabi
We should also not to forget to pay attention to desserts. Sweet tooth travellers will simply have to try local pudding Umm Ali, which is made from milk, nuts and dried fruits. Of course, you will find more well-known oriental sweets, such as sherbet and baklava. Fans of pastry are recommended to try honey donuts called ligemat. Each dining facility surely offers its guests to ... Open »
Muscat
Fish dishes are as well gaining popularity in the restaurant specializing in ethnic cuisine. Muscat imports various sea foods. Traditional treat is samak meshwi being fish grilled on charcoal. Those wishing to try more exotic treats should order dried fish “laham”. Various sea foods platters are of immense popularity too. These commonly include calamari, mussels and other ... Open »
Doha
It’s really difficult to find a restaurant of national cuisine in Doha. The reason for this is in the fact that local culinary traditions have been almost completely replaced the culinary traditions of the neighboring countries. That’s why the modern kitchen in Doha is a unique blend of Indian, Pakistani and Arab cuisines. Travelers who decide to make a safari to the desert ... Open »

Travel notes on best cuisine and restaurants of Sharjah (United Arab Emirates) on OrangeSmile.com. Famous recipes and traditional dishes and courses in Sharjah restaurants. Where to eat - our recommendations on popular places in Sharjah, where you can taste delicious meal and also spend a good time with your friends.