Sightseeing in Panama City - what to see. Complete travel guide 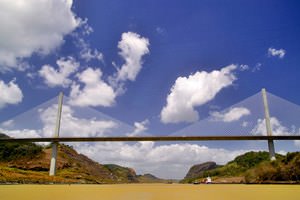 The capital city of the same named republic, Panama is the land of exotic animals and plants. Impenetrable rain forests occupy a large area of this region. The reason for this is in the fact that these forests are crucial for the normal operation of the Panama Canal. Besides the fact that the forest serves as a watershed, it also regulates the level of groundwater and prevents the development of soil erosion. Therefore, local people are very careful to green areas and protected zones have retained their original appearance.
Extraordinary weekend in Panama City - unusual places, services and attractions for travel gourmet
…

Open
In addition to beautiful nature Panama is rich in attractions. Just like the majority of old cities, Panama is conventionally divided into Old and New. The Old Town was completely destroyed in 1671 and today visitors can see only ruins and foundations of ancient buildings. The new part of town is the most interesting place for tourists. Despite the name many buildings of this part were built several centuries ago.
Here you can see the buildings that represent various architectural styles. The area named Casco Antiguo features more than eight hundred of beautiful buildings, with each one each unique and beautiful in its own way. The area named Casco Viejo is the location of one of the most important architectural places of interest - Las Bovedas Castle. It is located on the coast, and the area around the castle is considered the most romantic and secluded place for walking. Near the castle is located the building of the French Embassy. You will also find several restaurants and shops nearby. The Cathedral Square is the location of the main religious attraction of the city - Metropolitan Cathedral. Art lovers should definitely visit the National Theater located in one of the oldest buildings of the city. It has recently been renovated recently and is ready to welcome new guests. Copyright www.orangesmile.com
Extraordinary weekend in Panama City - unusual places, services and attractions for travel gourmet
…

Open
Trips to Taboga Island, which is often called the "Island Of Flowers", are very popular among fans of natural attractions. This island is located near the coast of Panama City and can be reached by ferry in less than an hour. The main feature of the island is the diversity of flowering plants. Holidaymakers here are also offered incredibly beautiful beaches with golden sand. On this island, it is quite easy to find a place for a secluded relaxation. 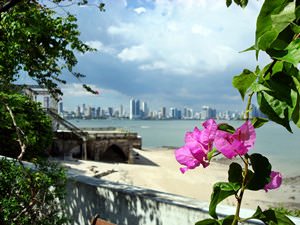 An important historic symbol of the city is Ancona Hill. The height of the hill is 300 meters. It had been in possession of the United States for many years. Only in the 80s of the last century, Panama managed to recover these lands. Now the state flag is set on the top of the hill. On the hill, there is a beautiful park that is considered the best viewing platform in the capital offering a great view of many landmarks.
Extraordinary weekend in Panama City - unusual places, services and attractions for travel gourmet
…

Open
Visitors to Panama City should definitely explore the UNESCO-protected Niokolo-Koba National Park, which is one of the most beautiful places in the country. This park covers the territory of a large archipelago consisting of 38 islands. The name of the park comes from the largest of the islands. Travelers can look forward to plenty of exciting entertainment. They can relax on beautiful beaches, enjoy the exotic nature, as well as go scuba diving to appreciate the beauty of the underwater world. 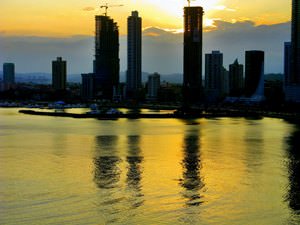 One of the most popular places in the capital is Balboa Avenue, which is sure to surprise visitors with its contrasts and lively atmosphere.

Walking along this avenue, you can admire incredible modern skyscrapers and watch dilapidated boats of local fishermen by the waterfront. On the waterfront, there are several beautiful monuments, a large fountain, and the most popular entertainment venues in the city.
Extraordinary weekend in Panama City - unusual places, services and attractions for travel gourmet
…

Open
For most tourists, the favorite place for walking is the historic district of Casco Viejo, which, in addition to its old buildings, has one more interesting feature. Facades of many historic buildings are decorated with bright graffiti drawings. Searching for the most incredible artworks makes a walk in the historic district even more fascinating.

This guide to iconic landmarks and sights of Panama City is protected by the copyright law. You can re-publish this content with mandatory attribution: direct and active hyperlink to www.orangesmile.com.

City tours, excursions and tickets in Panama City and surroundings

National and city parks around Panama City
♥   National Park 'Camino de Cruces' , 9.2 km from the center. On the map

Sights around Panama City from our guide 'Extreme places on Earth'

Distance from Panama City center - 24.8 km.
The observation deck is equipped with chairs and tables; it’s noteworthy that the platform, as well as other environmental elements of decoration, is made of construction waste, including marble, wood and steel. Canopy Tower observation deck is located at an altitude of 275 meters above sea level. It has a rounded shape and resembles a huge nest. The center of a 'nest' is occupied with an egg of impressive size - a specially designed layout that makes the appearance of the old radar tower even more symbolic and attractive. … Read further 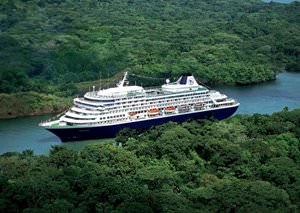 Distance from Panama City center - 20.5 km.
Altogether, the grand project has required huge amounts of money, human effort, dealing with natural disasters and disastrous epidemics. More than 20000 people died under the heavy conditions during the years of work. Nowadays those scary stories are just a distant memory and the Panama Canal has become an essential component in the global economy, international transport system and tourism. … Read further

Sightseeing in Panama: things to see

Panama is home to many national parks, many of which are added to the list of UNESCO World Heritage Sites. Coiba National Park is one of them. The park covers whole Coiba Island, the largest island in Central America. The Darien Gap National Park is primarily famous for a natural bridge that connects Central and South America. Impenetrable in some parts, the park is a great place to see pristine tropical nature, rare animals and birds. La Amistad International Park is also a beautiful place located on the border with Costa Rica, so it is managed by the both countries. … Open 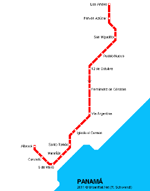 Search touristic sites on the map of Panama City

Sightseeing in regions nearby Panama City

Cartagena
The underwater world is famous not only for its diversity of inhabitants but also for its historical sights. Many years ago Cartagena attracted British corsairs. The result of their struggle with the indigenous population is sunk merchant ships resting on the seabed since then. Thousands of divers from all corners of the world visit these places to see them. According to ... Open »
San Jose
San Jose is the capital of Costa Rica. The city, which was founded in 1737, is famous for its pleasant mild climate. The style of decoration of the local houses is a combination of a variety of styles from traditional Spanish architecture to the ultra-modernist trends. The main city square, Plaza de la Cultura, is located in the center of San Jose. The square is surrounded by a ... Open »
Escazu
The capital of the country is named San Jose. This place attracts travellers by its mild climate and unique atmosphere. At a glance the city may look like an ancient Spanish settlement, because here have survived numerous old houses. However, near them you will see new tall buildings created according to best traditions of modern architecture. The center of the city is defined ... Open »
Medellin
In addition to sightseeing guests of the resort will definitely have a lot of fun. Nightlife lovers will find numerous entertaining programs that are organized on Thursdays and Saturdays. Medellin has become the venue for the annual carnival of flowers Fier de Las Flores. Best florists of the country participate in this festival, so here take place numerous events and ... Open »
Bogota
Bogota also has some architectural and historical sights. Among them is Caterdal Cathedral that was built in 1572-1610, and renovated in 1998. This cathedral is located on Plaza Bolivar. Also don’t forget to visit the President Palace as here you can see a picturesque ceremony of changing the guard. Finally, we simply cannot fail to mention Santa Clara church and San ... Open »
Granada City
Granada City is also famous for one more natural attraction – the Masaya Volcano National Park. This is a beautiful volcano with no less picturesque surrounding nature, so no wonder why so many tourists want to visit this attraction. There are several cars near the entrance, and visitors can use these cars to get around. Don’t forget to visit the local museum where you ... Open »

All about Panama City, Panama - sightseeings, attractions, touristic spots, architecture, history, culture and cuisine. Prepare your trip together with OrangeSmile.com - find out the 'must see' things in Panama City, which places to visit, which excursions to take, where the breathtaking views are waiting for you. Planning your trip with this travel guide will help your to get the most out of Panama City in few days.