Sightseeing in Escazu - what to see. Complete travel guide 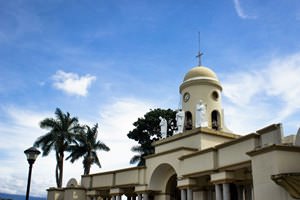 Costa Rica is an interesting country that has many places to see despite its small territory. Visitors of this place will find here large number of nature parks, historical places of interest and various cultural complexes.
Shopping in Escazu - main shopping streets, outlets and boutiques
One of the largest shopping centers in Costa Rica is Multiplaza in the city of Escazu. In addition to numerous fashion stores, this big and beautifully designed mall houses several appliance …

Open
The capital of the country is named San Jose. This place attracts travellers by its mild climate and unique atmosphere. At a glance the city may look like an ancient Spanish settlement, because here have survived numerous old houses. However, near them you will see new tall buildings created according to best traditions of modern architecture. The center of the city is defined by the Plaza de la Cultura. Museum of gold, National Theater and the newest Informational Centre are located around this square.
National Museum and Park Espania are just nearby. On weekdays the garden features works of local artists. Besides that tourists are offered to attend an excursion to San Jose Cathedral, see the exhibitions of Museum of Insects, Museum of Criminalistics, and Museum of History of Press. Agree, such choice of cultural facilities is truly amazing and close proximity of the sights opens up huge opportunities for sightseeing and doesn’t create any obstacles for curious travellers. Copyright www.orangesmile.com
Family holidays with kids in Escazu. How to entertain your child, things to show to children.
Tourists with children who choose Costa Rica for family vacations will have the opportunity to visit many amusement parks, nature reserves, and other interesting attractions. Thus, Parque …

Open
Shopping lovers will be glad to visit the largest and most colorful markets of the city. Mercado Central Market is considered the largest one. Mercado Bourbon occupies the second place.

Alajuela is the second largest city of the country. The main sight of this place is a butterfly farm. Here you can also make a trip to Poas Volcano, visit craftsmen outlets and buy memorable souvenirs. 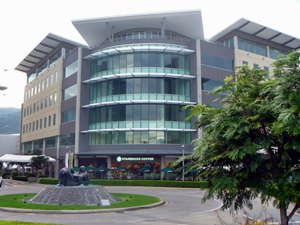 The main natural attraction of these places is the Arenal Volcano. Its last major eruption occurred in the year 2000. The height of this volcano is 1,657 meters. It is located on the territory of the national park with the same name. Here on fertile soils, rare plants and flowers grow. Many rare birds and insects can also be seen here. Currently, the volcano poses no threat to the locals, despite the fact that sometimes there are small eruptions of lava. For tourists, watching them remains a favorite entertainment.
Extraordinary weekend in Escazu - unusual places, services and attractions for travel gourmet
…

Open
Among the natural attractions, it is definitely worth highlighting the Island of Coconut, a trip to which will also give a lot of impressions. This is the largest uninhabited island on the Pacific Ocean. Its area is about 24 square kilometers. The whole territory of the island is covered with lush tropical vegetation. The highest point of the island is Mount Raundel-Kon. Getting to this island is not easy, but the most patient and motivated tourists will be able to see this amazing natural corner, untouched by the human hand. 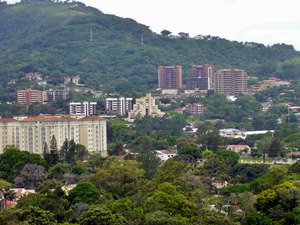 Guayabo Archaeological Park also continues to be in the attention of tourists. Its area is about 220 hectares. Once, the territory of the park was a fairly large and developed city. Three thousand years ago, its territory was inhabited by about 10,000 people. In the 14th century, the city was completely emptied. Now on the territory of the park is actively being explored. Archaeologists have found here the ruins of ancient streets and houses, as well as aqueducts, which were built at the dawn of the city.
Shopping in Escazu - main shopping streets, outlets and boutiques
One of the largest shopping centers in Costa Rica is Multiplaza in the city of Escazu. In addition to numerous fashion stores, this big and beautifully designed mall houses several appliance …

Open
Fans of beach recreation and entertainment will have the opportunity to spend a day on the charming Island of Tortuga. It also has many interesting legends about pirates and untold treasures, which they concealed in the most hidden corners of the island. Now tourists are attracted here by quiet beaches with snow-white sand, close to which come dense thickets of palm trees. 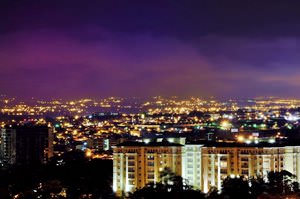 Interesting architectural sights can be admired in the town of Cartago. Here is the beautiful Basilica of Our Lady of the Angels, which miraculously managed to survive during the last earthquake. In this basil, there is a valuable religious artifact - a statue of the Black Madonna. Equally valuable, are the elements of the ancient design preserved in the basilica.

This guide to iconic landmarks and sights of Escazu is protected by the copyright law. You can re-publish this content with mandatory attribution: direct and active hyperlink to www.orangesmile.com.
Escazu - guide chapters 1 2 3 4

City tours, excursions and tickets in Escazu and surroundings

Shopping streets in Escazu
♥   Shopping area ' and Avenida Escazu' Escazú, 2.6 km from the center. On the map

♥   Shopping area ' Multiplaza Escazu' Escazú, 3.6 km from the center. On the map

♥   Shopping area ' Avenida Central' San José, 7 km from the center. On the map

National and city parks around Escazu
♥   National Park 'Volcán Irazú' , 31.9 km from the center. On the map

Sights around Escazu from our guide 'Extreme places on Earth' 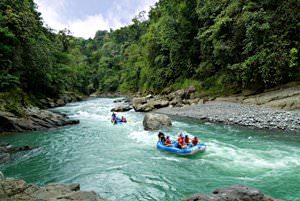 Distance from Escazu center - 65.8 km.
It must be noted that the great swirls form during the heavy rain on the river, so one should not distract the surrounding landscapes for long. Pacuare has been one of the ten best rivers for rafting on Earth for several years. Partially it is due to the wonderful surrounding landscapes. Tourists who like active recreation with the children should take into account that rafting on Pacuare is not recommended for children under 14 years. … Read further 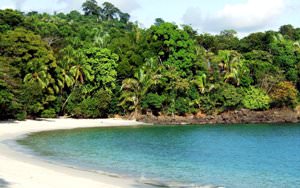 Distance from Escazu center - 58.3 km.
Some areas are equipped with suspension bridges, not everyone has the courage to take a walk on them. You may take exquisite shots from the bridges since they are located in the most beautiful areas of the reserve, near the waterfalls above the wild rivers. Courageous tourists are fond of Mangrove tours in wetlands, they have an opportunity to see crocodiles and other reptiles there as well as study Damas caves. Romantics can take a walk along the gorgeous white-sand coast and watch the birds, some protected beaches of Manuel Antonio are accessible to leisure. … Read further

This wonderful country is mostly famous for its nature landmarks. Costa Rica is home to mysterious caves, big volcanoes, beautiful flower fields, dense forests and waterfalls. There are several active volcanoes in the country – Irazu, Arenal, Poas and Rinkon de la Vieja. All of them are located close to large settlements, so there are roads to these volcanoes and visitors are offered to attend excursions every day. … Open

Search touristic sites on the map of Escazu

Sightseeing in regions nearby Escazu

San Jose
Not far away from the central square you will find another one named Plaza de la Democracia. The former barracks of Bellavista are located here. Nowadays these barracks have been turned into a national museum, an amazing museum of jade, several administrative agencies and Parc de la Ekspreson that has become a home place to the exhibition of works of the talented local ... Open »
Granada City
Buses connect the capital of the country, Managua, to Granada City. One hour later, the bus driver will stop in the city of your destination. When departing from Ometepe, the bus ride will be somewhat longer – roughly two hours. The longest route starts in Costa Rica and lasts three and a half hours. As Granada City is not big, it is comfortable to explore it on foot. ... Open »
Managua
Managua is the capital of Nicaragua. This is not only a large political center but also the second city in terms of population density in Central America. Managua lies near the shore of the lake with the same name. Nearby Momotombo Volcano makes the city’s skyline even more picturesque. Currently, this is a sleeping volcano so tourists have nothing to worry about and can ... Open »
Panama City
Here you can see the buildings that represent various architectural styles. The area named Casco Antiguo features more than eight hundred of beautiful buildings, with each one each unique and beautiful in its own way. The area named Casco Viejo is the location of one of the most important architectural places of interest - Las Bovedas Castle. It is located on the coast, and ... Open »
Tegucigalpa
The main historical and religious attraction of the city is Iglesia de San Francisco Church built in the 16th century. The church’s interior is made according to the best traditions of the Spanish style. This church looks quite unusual. Another well-known monument is the old San Miguel Church, which building took place during the second half of the 18th century. The most ... Open »
Honduras
Copan Ruins are one of the most famous sights of Honduras. This is a ceremonial center of ancient Mayan Empire that still keeps temples and stone stele with mysterious carvings. Music and art are very popular in the country, so in Comayagua city is opened a school of fine arts that is fully sponsored by the government. Many famous painters have finished this school. Among them ... Open »

All about Escazu, Costa Rica - sightseeings, attractions, touristic spots, architecture, history, culture and cuisine. Prepare your trip together with OrangeSmile.com - find out the 'must see' things in Escazu, which places to visit, which excursions to take, where the breathtaking views are waiting for you. Planning your trip with this travel guide will help your to get the most out of Escazu in few days.