Fun and festivities in Palestine - celebrations, festivals and cultural events 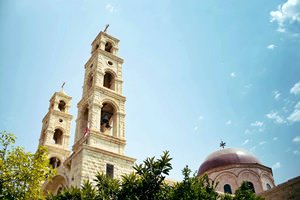 The West Bank, a Palestinian territory, is home to Arab Palestinians. Approximately half of them are Christians, the latter are Muslims. Holidays of both confessions are widely celebrated in the territory, and so no one gets confused about Christmas or the holy month of Ramadan. In Ramallah, the administrative center of the State of Palestine, there is always a Christmas tree on the Yasser Arafat Square. The beautifully decorated tree is a magnet for people who enjoy gathering here. By the way, Palestine is a secular country; at least school education is secular here. Not many people are aware of this, but Palestine has the highest percentage of educated people in the Arab world – more than 92% of the territory’s residents can read and write.
Things to do in Palestine - active leisure
Tourists can enjoy different types of vacations in Palestine depending on their taste and preferences. If you read a lot of negative information about …
Read further
In Bethlehem, on the central square not far from the Church of Nativity, tourists can visit the Peace Center. This venue regularly hosts art exhibitions, cultural meetings, and concerts. Tourists interested in Russian culture can visit the Russian Center of Science and Culture and check out its exhibitions and upcoming events.
In the settlement of Qasr al-Yahud that lies near the River Jordan to the east of Jericho, there is an annual celebration dedicated to an important event for all Christians – the baptizing of Jesus Christ. It is believed that John baptized Jesus near the settlement. Thousands of pilgrims come to this place to breathe the fresh air of the sacred place and swim in the River Jordan. The Gospel tells that the baptizing took place near the settlement of Bethabara that hasn’t survived to modern time. The exact coordinates of the settlement are also unknown. Moreover, the river has changed its flow over 2,000 years, so it is hard to find the exact baptism site. Copyright www.orangesmile.com
What you need to know about Palestine prior to visit - advices
1. Make sure you always have a passport with you. Document checks are frequent in Palestine, and if you fail to show an identification document, you …
Read further
At a glance, Palestine and Austria seem to have no relations but the name of the genius Austrian composer has connected these two countries. Every year, a grandiose event takes place in Palestine, the Palestine Mozart Festival. As a rule, concerts take place in several cities, namely, Bethlehem, Jerusalem, Ramallah, and Nablus. Musicians from all over the world arrive in Palestine to perform here. The Festival of Modern Dance in Ramallah is another major annual event. Not only professional dancers from Palestine but also dancing groups from all over the world participate in this festival. 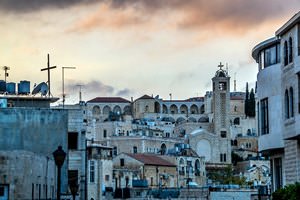 In Ramallah, tourists can visit the museum and mausoleum of the famous Palestinian poet and novelist Mahmoud Darwish. The complex is located on a hill and is separated into two parts by a wide ladder. The architect team tried to make a building that symbolizes an open book. The low-rise buildings on the sides resemble pages, and the ladder in the middle is reminiscent of the binding. The complex features a memorial of Mahmoud Darwish, his works, and personal items. A part of the exhibition is dedicated to the political side of the poet’s life. The museum hosts multiple poetic festivals.
What to see and what to visit in Palestine with children
Palestine – the West Bank of the River Jordan – borders Israel and Jordan. The Gaza Strip has a border with Egypt. Officially, the State of …
Read further
Mahmoud Darwish is a notable personality for Palestinians. His works are translated into multiple languages, and many of them have ideas opposite to the opinion of neighbor Israel. Darwish encouraged Israelis to leave Palestine. We can find similar ideas in the works of Khalil al-Sakakini, a writer and educator who studied abroad and was in love with his motherland. He remains a true hero for Palestinians and an unpleasant person with radical ideas for Israelis. 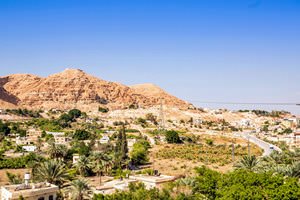 Tourists can visit the Cultural Center of Khalil al-Sakakini in Ramallah. It is open in the former family home of Khalil Salem Salah. The venue regularly hosts exhibitions, concerts, and film screenings. Ramallah is the location of a mausoleum dedicated to the political leader and founder of the Palestinian liberation movement - Yasser Arafat. The complex is built at some elevation and has a minimalist design. The burial site always has the ceremonial guard. Having visited these places, do not hurry to tell your impressions to people in Israel. You will not find any support but are likely to face negativity or aggression.
Shopping in Palestine - best shopping places, what to buy?
The territory of Palestine includes the Gaza Strip – a separate area near the Mediterranean Sea – and the West Bank, an area near the River …
Read further
It is not rare to see a loud and smiling group of well-dressed locals when taking a walk in the city. These dancing and singing people are wedding guests. Weddings are usually so crowded in Palestine that guests stay on the street outside. Palestinian weddings are traditionally very big. 500 guests is a small wedding only for the closest friends and relatives. One thousand guests is a midsize wedding. A true wedding for Palestinians is an event when two or more thousand guests congratulate the newlyweds. When people dance their traditional dance – Dabke – it feels like the entire city is dancing with them.

This article about national fests and celebrations of Palestine is protected by the copyright law. You can re-use the content, but only under the condition of placement of an active link to www.orangesmile.com.
Palestine guide chapters 1 2 3 4 5 6 7 8 9 10