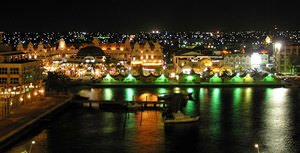 In Oranjestad, travelers can see a lot of unique natural attractions, as well as interesting historical landmarks. The city's oldest building is Fort Zoutman dated from 1796. The fort was named after the famous Dutch admiral. Despite its impressive age, the fortification looks truly magnificent. Several tourist attractions are found in the port area, and the most famous one is the old Willem III Tower.
Your active city break in Oranjestad. Attractions, recreation and entertainment - best places to spend your day and night here
Oranjestad enjoys great popularity among fans of ecotourism. The city and its environs accommodate many interesting natural attractions. A trip to the local Butterfly Farm would bring a lot …

Open
Its construction was completed in 1868, the tower was part of the fort. Over the years, it has repeatedly changed its purpose: it has served as a lighthouse, the main clock tower, library, post office, and watchtower. Today, the fort is occupied by the Historical Museum of Aruba, which presents diverse collections of artifacts. On Tuesdays, it hosts interesting folklore events with the participation of local dance and music groups.
Another important sightseeing object is Queen Wilhelmina State Park, as well as the Governor's Palace located nearby. Having checked out the outstanding architectural monument, you can stroll along the winding alleys of the park and admire centuries-old trees. An interesting cultural institution is the Numismatic Museum of Aruba whose collection includes more than 30 thousand exhibits. Copyright www.orangesmile.com
Advices to travellers: what you should know while being in Oranjestad
1. Literally all year round, the resort has sunny and hot weather, air temperature rarely drops below +29 °C. The height of the tourist season is from April to September. Going on vacation …

Open
The museum displays coins and banknotes brought from one hundred countries of the world. No less interesting is the Archaeological Museum's collection. This one houses a rich collection of artifacts brought from all over the island. Extensive collections of household items, tableware, jewelry, and religious artifacts allow visitors to fully appreciate the culture and traditions of the island's indigenous inhabitants.

In the city center, you will find its most famous monument - Simón Bolívar Statue. It was presented to the city by the Venezuelan government and recalls important historical events. Among the natural attractions, the most outstanding one is the Natural Bridge. The unique coral structure is over 100 feet long, and in shape it indeed resembles a huge bridge. If the city's attractions are not enough, you can always go explore the immediate environs where they also have many outstanding landmarks.
Shopping in Oranjestad - main shopping streets, outlets and boutiques
Oranjestad is considered Aruba's most attractive city for shopping. Travelers should pay special attention to goods made in Indonesia and the Netherlands. Most of the shops in popular …

Open
The capital of Aruba boasts wonderful religious attractions too. The main Catholic shrine is Saint Franciscus Church, which attracts lots of tourists despite its small size. This one is remarkable with its wonderful appearance, as well as impressive interior decoration. The history of the temple is of equal interest - listen carefully to a guide or locals who will tell you in detail about why it stands in its place - that is, in the desert. Nearby you can find a wonderful stone maze with large cacti and coconut trees. 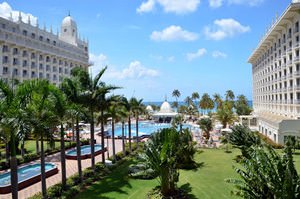 Also, do not pass by Lourdes Grotto, a unique shrine that was built in the rocks in 1958. On February 11, a solemn mass is held here as part of the Feast of Our Lady of Lourdes. Ask any citizen about the history of this place - he or she will be happy to tell about it, as the townspeople are very proud of their culture and history. Another must-visit shrine is the Evangelical Church of San Nicolas striking with its spacious atmosphere.
Guide to Oranjestad sightseeing - things to see and to visit
The construction of this town started in 1796. The first facility built was called the fort named Zoutman. The fort has survived till our days, so one can easily visit it. Around it were …

Open
Besides Catholic shrines, you can also find Jewish ones (Beth Israel Synagogue), as well as a Protestant temple (the Old Protestant Church). The synagogue was built in 1942, since in the 1920s, many East European Jews (mainly from Poland) came to Aruba, thus forming an extensive Jewish community. The Old Protestant Church captivating tourists with its magnificent exterior at first glance is worth a visit too. The shrine was built in 1846, but as soon as in 1950, the restoration of the building was needed, which was done almost forty years later, in 1988. 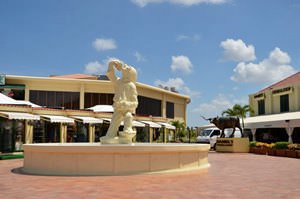 The California Lighthouse is another important landmark in the capital of Aruba. It owes his name to the SS California that sank near Arashi Beach in 1891. After this event, it was decided to build a lighthouse, which was completed in 1916. One hundred years later, the structure was restored. It is certainly worth visiting the beautiful farms located in the capital of Aruba and its environs - Donkey Sanctuary Aruba, Aruba Ostrich Farm, as well as The Butterfly Farm.
Family holidays with kids in Oranjestad. How to entertain your child, things to show to children.
Oranjestad will pleasantly surprise vacationing families with a variety of unusual attractions. The Butterfly Farm would be perfect to visit with kids. This is an incredibly beautiful …

Open
A great historical monument is the beautiful Old Dutch Windmill, which was built in 1804 in Friesland (the Netherlands), damaged in 1929, and transported to the island in 1960 when Aruba's tourism industry was looking for original attractions to catch travelers' attention. The building itself tells an interesting legend: it is believed to have been cursed since the sale of De Olden Molden restaurant in 1975 (opened in 1962). The entrance to the building is closed, but everyone has a chance to enjoy its truly magnificent look from the outside. And, of course, take a couple of pictures. 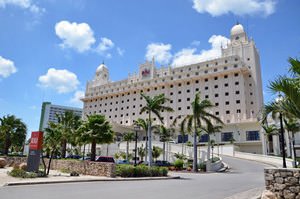 As for natural attractions, an outstanding one is the Ayo and Casibari Rock Formations with its bizarre-shaped boulders. Besides the stones, its visitors can see many cacti and iguanas living in this place. Fans of archaeological sites and places steeped in history should go explore the Balashi Gold Mill Ruins and the Bushiribana Gold Mill Ruins. When it comes to museums, tourists visiting the island would be happy to check out the Aruba Glass Ceramics with its magnificent collection of products created by the hands of local craftsmen.

In the section below, you can get one of our excursion, activities or city discovery tours over Oranjestad and surroundings. Our website offers 10-30% lower ticket prices, when compared to the offline purchase on the spot.

This guide to cultural sights Oranjestad is protected by the copyright law. You can re-publish this content with mandatory attribution: direct and active hyperlink to www.orangesmile.com.
Oranjestad - guide chapters 1 2 3 4 5 6 7 8

One of the most remarkable and popular attractions in Aruba is the Old Dutch Windmill on Palm Eagle Beach. It was built in the Netherlands in the early 19th century, and then disassembled and relocated to Aruba. In this small bright-red mill which looks naturally among cactuses, palm trees and exotic flowers, is today located a restaurant, which makes visiting this place an excellent option for those who like to combine business with pleasure. Palm Eagle Beach also offers you the opportunity to dive into the sea and explore the remains of the legendary ship “SS Antilla”, which belonged to Germany. The ship which took goods from Aruba to Germany, anchored near the coast in May 1940, and its crew did not know that Germany had entered Holland. The Dutch were going to confiscate the ship, but the captain ordered the crew to sink it. … Open

Photogallery of cultural heritage of Oranjestad

Excursions over cultural sights of neighbours of Oranjestad

Curacao
Another famous natural landmark is located in the western part of Curacao. Beautiful Christoffel Park becomes a habitat for many animals and birds; during a walk around the reserve you can see iguanas and rabbits, white-tailed deer and lizards, as well as donkeys and exotic birds. A high tower was built in the reserve especially for tourists, so you can enjoy the natural ... Open »
Willemstad
The most interesting districts for travelers will be Otrobanda and Punda located on both sides of St. Anna Bay. It is here where you can find most of the architectural and historical sights. Along the canal you can see beautiful mansions dating back to the 18th-19th centuries. Today, large part of the beautiful historic buildings are converted into shops, restaurants and ... Open »
Bonaire
There is wonderful small Klein Bonaire Island not far from the western coast. It is also one of the local attractions. Slaves lived here several centuries ago. Their dilapidated huts remind the travelers of that period. The island had been in private ownership for a long time. It started welcoming tourists only in 1999. Besides old huts, the island attracts with its unique ... Open »
Cartagena
As for religious attractions, the Iglesia de Santo Domingo is rightly considered the most significant of them. Its construction was completed in 1536. The church became the first religious building in the newly-formed city. A site belonging to a much later period is the Cathedral of Cartagena), the construction of which lasted 27 years. The opening of the cathedral took place ... Open »
Santo Domingo
The city of Santo Domingo is a perfect destination for those tourists giving preference to different excursions and exploration of historical sites. The city was established in 1496. Its area has preserved numerous buildings and constructions of colonial epoch. Many of the buildings preserved are the landmarks of global significance. The historical district of the capital ... Open »
La Romana
La Romana is famous for its natural attractions, although the same couldn't be said of a small number of historical sites at the resort. The main cultural center of the region is the Altos de Chavon. This open-air museum was opened here more than 30 years ago. This museum is a recreation of a medieval town, the likes of which were located here in the era of the Spanish ... Open »

Culture guide to Oranjestad. Which fascinating sights to visit once you are in Oranjestad: temples, churches, museums, theaters and castles. Recommendations (with addresses, phone numbers and links) on the places 'must visit' in Oranjestad. Plan your own city excursion by using this page info!