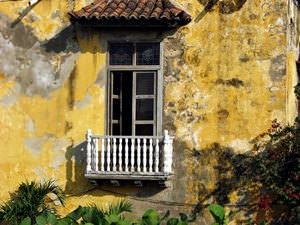 The main historical value of Cartagena is its colonial-times structures. You can endlessly admire the beautiful views of palaces and charming streets. The concentration of outstanding historic landmarks is the area of Centro Amurallado (Centro-Amuralyado) surrounded by fortress walls, whose name can literally be translated as "Old Town". This is the place accommodating many beautiful colonial palaces, picturesque squares and park areas, as well as several ancient monasteries, whose buildings have been converted into modern hotels.
Top hotels in Cartagena for business trip or short vacation
One of the main "hotel values" of Cartagena is its unique hotels housed in buildings with centuries of history. The prestigious Sofitel Santa Clara Hotel can be found in a former …

Open
The ancient San Felipe de Barajas Castle is deservedly called the city's most interesting historic monument. Its construction began in 1533, immediately after the founding of the city, and was completed only by the second half of the 17th century. The main building material for the construction of fortification structures was shell rock. The castle is striking in its scale and spectacular appearance, despite the fact that it has never been finished.
Casa de Marqués De Hoyos Val stands out among outstanding architectural monuments. It is a classic example of Spanish colonial architecture that has preserved its original appearance after several centuries. However, the Palace of Inquisition (Palacio de la Inquisicion

) built in the second half of the 18th century is not inferior to it in beauty. The palace gate is made in the best traditions of baroque style, and the main decoration of its majestic facade is graceful balconies. Copyright www.orangesmile.com
Shopping in Cartagena - main shopping streets, outlets and boutiques
If you go shopping in the shops of Cartagena, do not forget that the closer the store is located to popular tourist sites, the higher the prices in it. Another local rule - "bargaining is …

, the oldest square in the city. Next, to it, you can see the colorful old Town Hall building, as well as a symbolic monument dedicated to Christopher Columbus. Tourists are no less attracted by the charming Los Coches Square (Plaza Los Coches

) where the city's best confectionery shops. 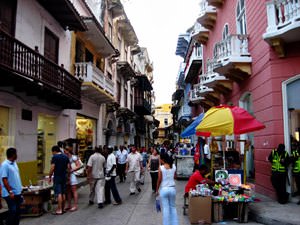 As for religious attractions, the Iglesia de Santo Domingo

is rightly considered the most significant of them. Its construction was completed in 1536. The church became the first religious building in the newly-formed city. A site belonging to a much later period is the Cathedral of Cartagena

), the construction of which lasted 27 years. The opening of the cathedral took place in 1602. Today it attracts travelers with luxurious design and variety of artworks presented in its alls.
Guide to Cartagena sightseeing - things to see and to visit
Cartagena is considered one of the most charming and interesting cities in Colombia. Founded by the Spanish colonialists in 1533, the port city has managed to preserve its priceless …

). Erected in the 16th century, it was originally used as a prison. Later, the building has changed its status several times, and today it houses one of the most popular city markets. The most interesting sights of the historic district are old historic convents, including La Popa Monastery

. The religious complex accommodates the ancient Chapel of the Virgen de la Candelaria

named after the patron saint of the city. A large part of the old monastery is currently converted into a historical museum. 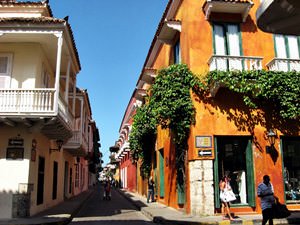 As for cultural establishments, the Museum of Gold has been the most visited among them for many years. Its visitors are introduced to a unique collection of precious metal products dating back to pre-Hispanic times. Exhibits presented in the museum once belonged to the first inhabitants of these places - Indian tribes; therefore many of them have cult significance. Cartagena can also boast the amazing Naval Museum, as well as the Museum of Modern Art displaying works by Alejandro Obregón.

In the section below, you can get one of our excursion, activities or city discovery tours over Cartagena and surroundings. Our website offers 10-30% lower ticket prices, when compared to the offline purchase on the spot.

City tours, excursions and tickets in Cartagena and surroundings

This guide to cultural sights Cartagena is protected by the copyright law. You can re-publish this content with mandatory attribution: direct and active hyperlink to www.orangesmile.com.
Cartagena - guide chapters 1 2 3 4 5 6 7 8 9
Car rental on OrangeSmile.com

Photogallery of cultural heritage of Cartagena

Excursions over cultural sights of neighbours of Cartagena

Medellin
Among other city sights is the old university, which continues to operate today. Its building is of a great interest from an architectural point of view, and the beautifully designed adjoining territory with an abundance of plants will be a pleasant place to relax. There is also a delightful Botanical Garden, the main pride of which is a collection of orchids. For travelers ... Open »
Oranjestad
In the city center, you will find its most famous monument - Simón Bolívar Statue. It was presented to the city by the Venezuelan government and recalls important historical events. Among the natural attractions, the most outstanding one is the Natural Bridge. The unique coral structure is over 100 feet long, and in shape it indeed resembles a huge bridge. If the city's ... Open »
Bogota
Start your observation of the city by making a walk in the central area of Bogota. Here is located the oldest square of the city called Plaza Bolivar. The square was founded in the beginning of the 19th century. In the center of the square you will find a monument dedicated to the first president of the country. Nowadays this square is a constant venue for numerous important ... Open »
Curacao
Another famous natural landmark is located in the western part of Curacao. Beautiful Christoffel Park becomes a habitat for many animals and birds; during a walk around the reserve you can see iguanas and rabbits, white-tailed deer and lizards, as well as donkeys and exotic birds. A high tower was built in the reserve especially for tourists, so you can enjoy the natural ... Open »
Willemstad
Fort Amsterdam built in 1635 remains the irreplaceable symbol of the city. This is the oldest building in town, around which Willemstad began to form. There are also equally interesting cultural institutions in the city. The most notable one is the Curaçao Museum. Its present location is a beautiful 19th-century building. Works by famous artists of our time are presented in ... Open »
Bonaire
There is wonderful small Klein Bonaire Island not far from the western coast. It is also one of the local attractions. Slaves lived here several centuries ago. Their dilapidated huts remind the travelers of that period. The island had been in private ownership for a long time. It started welcoming tourists only in 1999. Besides old huts, the island attracts with its unique ... Open »

Culture guide to Cartagena. Which fascinating sights to visit once you are in Cartagena: temples, churches, museums, theaters and castles. Recommendations (with addresses, phone numbers and links) on the places 'must visit' in Cartagena. Plan your own city excursion by using this page info!