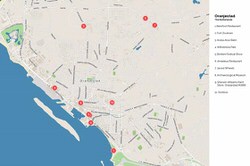 Interactive maps of hiking and biking routes around Oranjestad

1. You can zoom in/out using your mouse wheel, as well as move the map of Oranjestad with your mouse.
2. This interactive map presents two modes: 'Biking Routes' and 'Hiking Routes'. Use the '+' button on the map to switch between them.

This Oranjestad map has two modes: 'Railway Network' and 'Landscape & Rural Map'. Use the '+' button on the map to navigate.

Nature and parks of Aruba

The conservation area in which the Arikok National Park is located, occupies almost 20% of the island’s territory. The park’s area occupying 33 square kilometers is sheltered from the winds, and its soil is rich in various mineral compounds. It is because of this that excellent conditions for living have been created in Arikok for various animals and plants. The park has become the habitat of a number of snakes and bird species. Only in Arikok inhabits one species of parrots and owls. … Open

Our guide to Oranjestad

Travelers who're planning to visit Oranjestad with children should definitely head to the local ostrich farm. Guests are always welcome here. Visitors are provided with an interesting tour of the farm, during which they can make some photos with huge birds and learn how to take care of them. The main entertainment for tourists is the opportunity to feed the ostriches. There are many beautifully-equipped rest areas … Open

Oranjestad for children - what to visit

Aruba Off-Road Adventure is pleased to offer its services for those who prefer to relax on land. It organizes very interesting safari jeep tours for vacationers with children. This is your chance to see the natural and historical landmarks of the city and its environs. The tours have different durations so even families with small children can choose the most suitable one. In summer, beach recreation and boat … Open

The largest shopping center in Aruba, Palm Beach Plaza, is located in Oranjestad. To explore all of its shop windows, one would need weeks. People come here in search of clothes from European brands, children's goods, jewelry, and cosmetics. The mall is well equipped for family leisure, it has restaurants and cafes, a cinema and a bowling alley, as well as play areas for children of different ages. The most … Open

2. The most optimal type of public transport is the bus, which is available from 6:00 am until late in the evening. The fare is about 1.3 USD, buses run at intervals of no more than 30 minutes. 3. Travelers who plan to travel outside the city and visit remote areas of the island should consider renting a car or taking a taxi. Although taxis offer fixed rates, the price you pay for the trip should … Open

Besides ranches, the city has several farms, a visit to which would please animal lovers. In Philip's Animal Garden, tourists can see snakes, monkeys, camels, rabbits, goats, ostriches, and various birds. It is worth noting that almost all animals on the farm are not caught but saved. Aruba Ostrich Farm is also worth a visit - as the name implies, ostriches await tourists here. Among other things, this one offers … Open

Traditions and mentality of Oranjestad

As part of the large-scale carnival, which takes place in the second half of winter, a special children's parade, daily entertainment, and a huge selection of attractions are necessarily provided. Tourists won't feel alien at such holidays too - absolutely everyone can join them along with citizens. Fans of event tourism can visit Oranjestad at any time of the year, as original celebrations full of national color … Open