Sightseeing in Mandalay - what to see. Complete travel guide 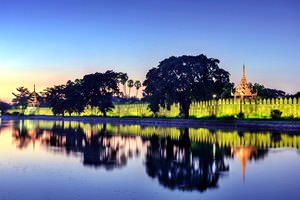 Eye-catching Mandalay is the second-largest city in Myanmar (former Burma). This city is internationally famous as a large Buddhism center. Mandalay is home to more than seven hundred pagodas, each of which amazes visitors with its beauty and grandeur. Every year, thousands of pilgrims arrive in this city to perform sacred rituals and pray. This land full of secrets and mystery has always lured generations of tourists. Don’t forget that Mandalay is the old royal capital of the country, and this fact draws even more attention to this amazing area. Everyone, who has visited this Burmese city at least once, calls Mandalay the most interesting destination that outperforms even large cities in Myanmar (Burma).
The city of Mandalay was officially founded in 1857 by King Mindon. Starting from 1860 and during the next twenty-five years, Mandalay was the capital of the Burmese Kingdom. Everything changed in 1885 when the British troops occupied the city. To resist the invaders and not let them capture the country completely, the ruling King Thibaw signed an agreement with France. This document mentioned the building of a railroad connecting Laos and Mandalay. Thibaw also intended to organize a navy in the country, but all his efforts were in vain. The United Kingdom added the whole territory of Burma to British India.
During World War II, the Japanese army occupied Indochina and this way tried to block the supply chain to China. The route to Yangon, which passed Mandalay, was built a bit earlier – in 1939. This route was a typical way to deliver ammo to China. However, the Japanese managed to attack Burma in May 1942 and capture Mandalay. The British could reclaim the territory only after the end of the war. The country finally became independent from Great Britain in 1948. After that, Mandalay turned into an important economic and cultural center of Upper Burma. Copyright www.orangesmile.com
Myanmar is incredibly rich in attractive and original attractions, but some of them are truly spectacular and worth visiting. Atumashi Monastery is one of them. This is an old architectural landmark, the name of which literally means “incomparable”. Visit this attraction of Mandalay and you will understand why the monastery was called this way. In modern times, the Atumashi Monastery has become a cultural establishment and lost its status of a shelter for monks years ago. Despite this, tourists from different parts of the world try to visit this impeccable architectural attraction and admire its skillfully made carved décor. 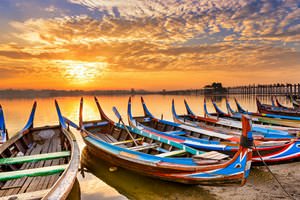 Gorgeous stucco enwraps the whole building like a belt. If you take a closer look, you will notice the motif that is typical for the traditional Burmese ornaments. The pattern is made in such a peculiar way that if you take a look at one element of the stucco, you will surely gaze at the next element. Because of this, it is nearly impossible to take one’s eyes off of the gorgeous carved décor of the Atumashi Monastery. Don’t be surprised to see multiple tourists who stand motionlessly in front of the building and gaze at its design. The patterned décor is truly original and unique, and, surprisingly, no other building in the world has a similar one.
How about exploring a real Burmese palace? A fabulous building was erected in a neighborhood of Mandalay in the 19th century. This building was home to Mindon and Thibaw kings. The palace shared its name with the city. This was a majestic wooden construction safety protected by the four-kilometer-long walls. The palace that tourists can see today is a precise copy of the original building, which was, unfortunately, lost during the bombing of the Japanese aircraft. The moat around the building and the protective walls, the height of which reaches nine meters, are the only elements of the original complex. The palace has several entrances, but only one of them is open for visitors. 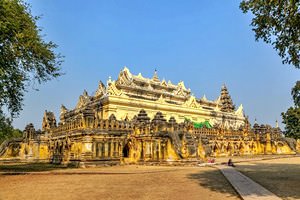 The Mandalay Palace consists of the main building with a tall gilded spire and several similarly looking wooden buildings on the perimeter. All buildings in the complex feature carved wooden décor, the beauty of which amazes even experienced foreign travelers. There is a museum in the central part of the complex. This museum exhibits the royal throne and bed and provides much information about the history of the city and its rulers. Another museum in the complex, which is smaller, is dedicated to the clothes of kings, ministers, and other nobles of the 19th century.
Tourists can get to Mandalay by air from Thailand. This is a fast and direct way to reach the miraculous world of pagodas. Besides this, tourists can always get on a train to Mandalay that departs from a major city of Myanmar, Yangon. Several trains go in this direction every day. Travelers need to be prepared for a long journey in this case – the train ride lasts roughly fifteen hours. Finally, there are buses to Mandalay from Yangon and other cities in Myanmar, but the journey time is approximately the same – from thirteen to sixteen hours.
This guide to iconic landmarks and sights of Mandalay is protected by the copyright law. You can re-publish this content with mandatory attribution: direct and active hyperlink to www.orangesmile.com.

City tours, excursions and tickets in Mandalay and surroundings

Sights around Mandalay from our guide 'Extreme places on Earth' 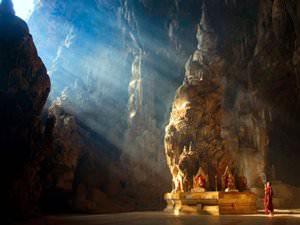 Distance from Mandalay center - 9.2 km.
The floor of the cave was designed with chic marble, comfortable benches were placed around the cave for visitors. In the center of one of the caverns is a golden sculpture of Buddha, beside which you can see a lot of beautiful statues and traditional jewelery for Buddhist culture. Kyaut SAE Cave is an important religious, cultural and historical monument of Myanmar. According to scientists, the first sacred places were established in the 13th century. … Read further

Some landmarks of Myanmar can amaze even experienced tourists. Inle Lake is a great example. This is a beautiful lake with crystal clear water that has a very interesting landmark on its western side. This is the Nga Hpe Kyaung Monastery also known as the Jumping Cat Monastery. Everyone is welcome to visit the shrine. Nowadays, there are six monks who live in the monastery, and the number of cats is several times more. Local monks started training cats several centuries ago, and these cute animals are trained to perform various jumps. If you visit this wondrous ancient monastery, you will be able not only to see specially trained cats but also to buy interesting souvenirs. … Open 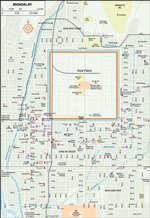 Search touristic sites on the map of Mandalay

Sightseeing in regions nearby Mandalay

Bagan
Some tourists might wonder whether there are still any landmarks in Bagan since the city was destroyed. This is a logical question. Despite the tragic events of the past, the city is still worth visiting. There are still thousands of stupas and temples that create a mystical atmosphere and add a secretive charm to the area. The ruins look quite gloomy, but no tourist feels ... Open »
Bago-Pegu
Once again, people had to rebuild the pagoda. In modern days, Mahazedi Pagoda is a beautiful golden building that attracts numerous guests from all over the world. The entrance to the pagoda is decorated with two white elephants. Of course, these are statues but they look simply impressive. There is also a pavilion with a seven-tiered Pyatthat roof in front of the pagoda. ... Open »
Chiang Mai Region
Thaton is perfect to explore the culture and traditions of the indigenous population. Local residents have cherished their amazing traditions for many hundreds of years; indigenous people are happy to represent their culture to foreign guests. Among the natural attractions, Doi Inthanon reserve featuring the mountain with the same name deserves special attention. It’s ... Open »
Chiang Rai
This city is founded by King Mengrai in 1262. For a long time it had remained the capital of the independent kingdom of Lanna, which was later conquered by the Burmese. Today Chiang Rai (or Changwat Chiang Rai) is the administrative center of the eponymous province located in the north of the country. This area is interesting due to the fact for a long time only impassable ... Open »
Chiang Mai
It is believed that Thailand attracts visitors primarily as a beach rest destination. However, this city is for those who like to keep their eyes and mind wide open. Here you will find as much as 300 vats (Buddhist temples), each of which deserves special attention and description. You can get acquainted with culture of this ancient nation by visiting culinary schools that ... Open »
Dhaka
Tourists with small children will find it interesting to visit the local zoo, which is situated sixteen kilometers away from the central part of Dhaka. When taking a stroll in this enchanting place, visitors will find two big lakes that become home for thousands of migratory birds every winter. There is a monkey center with more than two hundred species of these cute animals. ... Open »

All about Mandalay, Myanmar-Burma - sightseeings, attractions, touristic spots, architecture, history, culture and cuisine. Prepare your trip together with OrangeSmile.com - find out the 'must see' things in Mandalay, which places to visit, which excursions to take, where the breathtaking views are waiting for you. Planning your trip with this travel guide will help your to get the most out of Mandalay in few days.