Sightseeing in Bago-Pegu - what to see. Complete travel guide 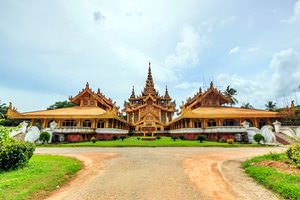 The city of Bago in Myanmar is located not far from Yangon. This is a middle-sized settlement. In the past, the city had another name, Pegu. The administrative center is now very popular with tourists from different parts of the world. This region is the most beautiful part of Myanmar, so if you do not know what places to visit in the country, consider spending several days in Bago.
Your active city break in Bago-Pegu. Attractions, recreation and entertainment - best places to spend your day and night here
Traveling to Bago, don't expect to see a variety of entertainment centers and nightclubs. Nevertheless, exploring Buddhist attractions is far from the only leisure option available here. …

Open
According to a local legend, two Mon princes, who came from the Thaton Kingdom, were the founders of Bago. Historical records state that this event took place in 573. First mentions of this settlement date back to 850. Local people had to endure several difficult periods. The Burmese were the first rulers in this area. Later, the city suffered from a Mongol invasion. Rulers and kings were changing, but Bago kept developing and growing. European guests became more frequent in the region. Many of them praised the beauty and power of the city.
1740 brought drastic changes to the region. Mon rebellion for the independent status of the city started a chain of bloody battles. The Mon people maintained their independence for 17 years, but Bamar king Alaungpaya captured the city and completely destroyed Bago. The rebuilding works started only 25 years later by the order of King Bodawpaya. However, the river had shifted its course by that time, and so Bago didn’t have direct access to the sea anymore. The city lost its importance as a trading center. Besides wars, Bago frequently suffered from earthquakes that were also bringing new damages. Nevertheless, the government was always rebuilding Bago. Copyright www.orangesmile.com
Shopping in Bago-Pegu - main shopping streets, outlets and boutiques
In Bago, you will find quite a few shopping centers walking around which can also turn into a kind of entertainment. Affordable clothes and shoes of local production are especially in demand …

Open
What attractions can tourists see in Bago? The Shwethalyaung Buddha or Reclining Buddha is the first landmark that attracts guests of the city. This is a giant statue of Buddha that is 55 meters long. According to a local legend, this statue was commissioned by a local Mon king. The king made an order to kill a young couple because they followed different religions. The girl prayed so hard for her lover that the idol standing nearby crashed into pieces. The king became scared of the wrath of gods and ordered to build a statue of reclining Buddha. He also ordered his people to change their religion to Buddhism. 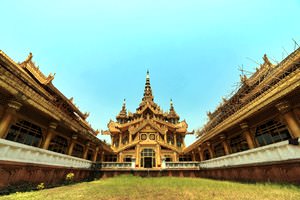 This is a truly giant sculpture that is 55 meters long and 16 meters tall. The Shwethalyaung Buddha is the official name of the monument. Here is a simple example that may be helpful in understanding the size of the statue – the Buddha’s little finger is three meters long. The statue was damaged and was believed to be lost, but it was rediscovered later. During the restoration of Bagu, the statue was brought to its original condition. The mosaic pillows on Buddha’s left side were added later, in the 20th century.
Excursion over cultural sights of Bago-Pegu - 'must visit' points of interest
The most interesting attractions of Bago are ancient temples and pagodas. Each of the religious sites is distinguished by its unique charm and history. Be sure to visit the Shwemawdaw Paya, …

Open
The Shwemawdaw Pagoda is another important landmark of Bago. This is a sacred place for Buddhist people. The pagoda has another name – the Golden God Temple. Inside the shrine, visitors can see precious relics – two hairs of Buddha himself. These relics are carefully protected to ensure their safety. The first pagoda on this site appeared yet in the 10th century. That building was significantly smaller than the pagoda we can see today. When king Bodawpaya ordered to rebuild Bago, he also decided to make the temple larger. The Shwemawdaw Pagoda got its current size at that time. The height of the pagoda is 114 meters. This is the tallest building in Bago. 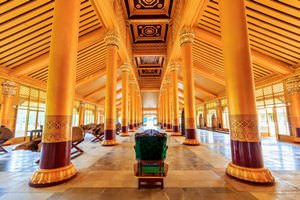 The Mahazedi Pagoda dates back to the 16th century. The purpose of this pagoda was to keep a precious relic – the tooth of Buddha. King Bayinnaung of the Toungoo Dynasty got the tooth during his stay in Sri Lanka. He wanted to preserve the relic for future generations and couldn’t think of a better idea than to build a pagoda for the tooth. Years later, the king understood that the relic was a fake, but he still decided to keep it.
Your active city break in Bago-Pegu. Attractions, recreation and entertainment - best places to spend your day and night here
Traveling to Bago, don't expect to see a variety of entertainment centers and nightclubs. Nevertheless, exploring Buddhist attractions is far from the only leisure option available here. …

Open
In the 17th century, the tooth was removed and brought to another pagoda in Sagaing. The tooth is still there. Just like many other landmarks, the Mahazedi Pagoda suffered much damage during the Mon rebellion. Later, the government could bring the building to its original glory. The devastating earthquake in the 30s of the previous century also had no mercy to the landmark. 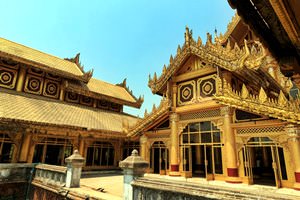 Once again, people had to rebuild the pagoda. In modern days, Mahazedi Pagoda is a beautiful golden building that attracts numerous guests from all over the world. The entrance to the pagoda is decorated with two white elephants. Of course, these are statues but they look simply impressive. There is also a pavilion with a seven-tiered Pyatthat roof in front of the pagoda. Inside the pavilion, visitors will find three Buddha statues.
Shopping in Bago-Pegu - main shopping streets, outlets and boutiques
In Bago, you will find quite a few shopping centers walking around which can also turn into a kind of entertainment. Affordable clothes and shoes of local production are especially in demand …

Open
In order to reach Bago, you will need to get to Yangon first and then take a train that heads to Mandalay or Mawlamyine. The train will reach Bago in two hours. If you prefer to travel in a car, the distance to the city is 80 kilometers. Of course, tourists can always call taxi. There are daily bus rides to Bago from Yangon.

This guide to iconic landmarks and sights of Bago-Pegu is protected by the copyright law. You can re-publish this content with mandatory attribution: direct and active hyperlink to www.orangesmile.com.
Bago-Pegu - guide chapters 1 2 3 4

City tours, excursions and tickets in Bago-Pegu and surroundings

Sights around Bago-Pegu from our guide 'Extreme places on Earth' 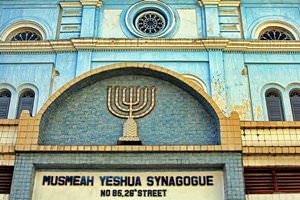 Distance from Bago-Pegu center - 173.4 km.
A major reconstruction was completed in 1896. The building and interior of the synagogue remain almost unchanged since then. The visitation book is located on the second floor of the synagogue. Everyone can leave entries in it. You can make sure that tourists from all over the world visit this landmark important for Yangon if you scroll through the pages of the book. A very interesting market is located near the synagogue. Clothing and popular souvenirs are sold on it. You can take photos and videos at Musmeah Yeshua synagogue, unlike many other religious sites. Its caretaker is always ready to conduct an interesting tour for foreign visitors. … Read further

Some landmarks of Myanmar can amaze even experienced tourists. Inle Lake is a great example. This is a beautiful lake with crystal clear water that has a very interesting landmark on its western side. This is the Nga Hpe Kyaung Monastery also known as the Jumping Cat Monastery. Everyone is welcome to visit the shrine. Nowadays, there are six monks who live in the monastery, and the number of cats is several times more. Local monks started training cats several centuries ago, and these cute animals are trained to perform various jumps. If you visit this wondrous ancient monastery, you will be able not only to see specially trained cats but also to buy interesting souvenirs. … Open

Search touristic sites on the map of Bago-Pegu

Sightseeing in regions nearby Bago-Pegu

Chiang Mai
It is believed that Thailand attracts visitors primarily as a beach rest destination. However, this city is for those who like to keep their eyes and mind wide open. Here you will find as much as 300 vats (Buddhist temples), each of which deserves special attention and description. You can get acquainted with culture of this ancient nation by visiting culinary schools that ... Open »
Chiang Mai Region
Outside the capital, there is also a decent selection of interesting places to visit. Chiang Dao town is ideal for hiking, as there are lots of interesting natural attractions and hundreds of popular hiking trails in it. There is the picturesque Doi Chiang Dao mountain in the immediate vicinity of the town attracting numerous climbers. There is a huge number of beautiful ... Open »
Bagan
Some tourists might wonder whether there are still any landmarks in Bagan since the city was destroyed. This is a logical question. Despite the tragic events of the past, the city is still worth visiting. There are still thousands of stupas and temples that create a mystical atmosphere and add a secretive charm to the area. The ruins look quite gloomy, but no tourist feels ... Open »
Mandalay
Gorgeous stucco enwraps the whole building like a belt. If you take a closer look, you will notice the motif that is typical for the traditional Burmese ornaments. The pattern is made in such a peculiar way that if you take a look at one element of the stucco, you will surely gaze at the next element. Because of this, it is nearly impossible to take one’s eyes off of the ... Open »
Chiang Rai
This city is founded by King Mengrai in 1262. For a long time it had remained the capital of the independent kingdom of Lanna, which was later conquered by the Burmese. Today Chiang Rai (or Changwat Chiang Rai) is the administrative center of the eponymous province located in the north of the country. This area is interesting due to the fact for a long time only impassable ... Open »
Bangkok
Regardless of the fact whether you like Bangkok or not, we can assure you that a trip to this city will definitely leave many unforgettable impressions. Bangkok is home to hundreds of temples and cloisters. Some of them are widely recognized as the most beautiful ones across South-West Asia. First of all, tourists are recommended to visit well-known Wat Phra Kaew, which is ... Open »

All about Bago-Pegu, Myanmar-Burma - sightseeings, attractions, touristic spots, architecture, history, culture and cuisine. Prepare your trip together with OrangeSmile.com - find out the 'must see' things in Bago-Pegu, which places to visit, which excursions to take, where the breathtaking views are waiting for you. Planning your trip with this travel guide will help your to get the most out of Bago-Pegu in few days.