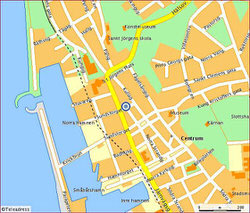 Interactive maps of hiking and biking routes around Helsingborg

1. You can zoom in/out using your mouse wheel, as well as move the map of Helsingborg with your mouse.
2. This interactive map presents two modes: 'Biking Routes' and 'Hiking Routes'. Use the '+' button on the map to switch between them.

This Helsingborg map has two modes: 'Railway Network' and 'Landscape & Rural Map'. Use the '+' button on the map to navigate.

Our guide to Helsingborg

Despite such huge destructions the city has managed to preserve several old buildings. Walk in the old part of the city and you will see St Mary's Church, Town Hall and Kernan Tower. Other places that are worth visiting are Fredriksdal Museum, Henry Dunker Culture Center and House of Jacob Hansen. However, the local open-air museum is still the most unusual cultural center of this city. The museum occupies quite a … Open

One of the oldest constructions in the city is the House of Jacob Hazen built in 1641. This beautiful house in the national style has preserved its original appearance. Today, the historic building serves as a hotel. There is a restaurant on the ground floor. The historical hotel is distinguished by its large conference center where important business meetings are held. The architectural monument of the later … Open

Maps of Copenhagen
Do you want to feel as the ancient Viking? We know that Yes! That's why we highly recommend you to visit the Roskilde. It is located 32 km from Copenhagen. Here, you will become a member of kayaking team, who are lead by the skilled instructors. Also, you can perform interesting water walks not only by the sea. For example, the Lake Esrum is not only the largest lake in Denmark ... Open »
Maps of Malmo
Casino Cosmopol is popular among gamblers, a wide range of slot machines and roulette is available for visitors here. Moreover, its visitors will find a beautiful bar with excellent spirits in the casino. It should be noted that despite the fact that the casino does not have a dress code, special attention is paid to the cleanliness and accuracy of clothing. For those who like ... Open »
Maps of Kristianstad
The most popular leisure area among townspeople and guests of the city is the beautiful Tivoliparken Park. This unique natural oasis with a very calm and relaxing atmosphere is just a five-minute walk from the city center. In the warm season, the park is buried in greenery and flower beds, convenient walking paths are laid throughout its territory. Many come to the park ... Open »
Maps of Arhus
Sherlock Holmes Pub is notable not only for a rich selection of drinks and refreshments but also for its unusual thematic focus. It occupies a beautiful historic building and is decorated using original antiques. A must-have for gamblers is the main casino of Aarhus - Royal Scandinavian. It has been operated in another beautiful old building for dozens of years. Many come to ... Open »
OrangeSmile.com - online travel reservation expert providing reliable car rental and hotel booking services. We feature more than 25.000 destinations with 12.000 rental offices and 200.000 hotels worldwide.
Secure Server