Family trip to Guatemala City with children. Ideas on where to go with your child 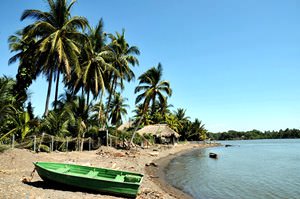 The city of Guatemala is sure to appeal to lovers of nature and active entertainment, as the city has many beautiful parks and entertainment centers. The most famous amusement park is considered to be the Mundo Petapa Irtra. It occupies a vast territory and offers visitors dozens of incredible attractions. In the park, there are carousels for children of different ages, roller coasters and catapults for fans of extreme sports, as well as playgrounds for children of different ages. You can have a great time with the whole family in the amusement park, since there are excellent cafes and recreation zones on its territory.
Advices to travellers: what you should know while being in Guatemala City
1. Goods and services can be paid not only in local currency but also in US dollars. It's best to exchange currency in banks or exchange offices “casas de cambio”. Currency exchange can …

Open
On a rainy day, you can go to the entertainment center Divercity, which also offers a lot of interesting attractions for children of different ages. In this center, children will be able to ride various toy cars, learn the basics of various professions and take part in interesting workshops. Special playgrounds are also equipped for the youngest. In the entertainment center, there is also a cafe where you can arrange an excellent family lunch or dinner.
If the aforementioned entertainment is not enough, be sure to visit the amusement park X-Park. It is more suitable for recreation with older children. A significant part of the attractions presented here are extreme, but there are several suitable entertainments for kids. In this beautiful park are positioned various obstacle courses, bridges and rope ladders constructed among trees, which not everyone is brave enough to climb. For the visitors of the park, are organized interesting team games. Here children will be able to go bungee jumping and learn the basics of rock climbing, as well as test their strength and endurance in thousands of other ways. Copyright www.orangesmile.com
Extraordinary weekend in Guatemala City - unusual places, services and attractions for travel gourmet
…

Open
There is the great La Aurora Zoo in Guatemala City, which is sure to please both children and adults. This zoo is very large, adorned with hundreds of trees and exotic plants, among the thick undergrowth of which are equipped with spacious animal cages. Among the inhabitants of the zoo are giraffes and lions, various kinds of monkeys, bears and wolves, as well as dozens of other animals brought from all over the world. Visitors can pat and feed the friendliest inhabitants of the zoo. One of the favorite among visitors with children is an aviary with parrots. On the territory of the zoo, there are small restaurants and playgrounds for young visitors. 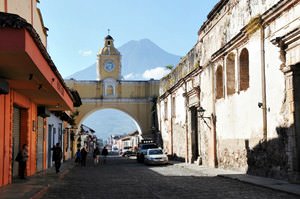 Nature lovers will also like the botanical garden Jardin Botanico. The large and well-kept garden is an excellent place for walking; even at the height of a hot day, it always reigns pleasantly cool. On the territory of the park, there are a lot of spacious paths along which children can run. During the excursion, visitors will have the opportunity to see interesting sculptures and admire rare plants.
Guatemala City design-hotels for stylish travellers
Among the hotels you will come across in Guatemala, the first-class Mercure Hotel Guatemala Casa Veranda deserves priority. It features a special design and has spacious rooms with parquet …

Open
There is an excellent children’s museum in the city, which is called the same way - Childrens Museum. As for the design, it somewhat resembles a huge entertainment center. The museum is located in an amazing park and has a furnished adjoining territory, where various playgrounds are equipped for children. In the indoor pavilions, there are a lot of interactive expositions for kids. During the fascinating excursions, they will be able to get acquainted with the basics of natural sciences and learn a lot of interesting things about the world around them. For children in the museum, interesting master classes and games are held for kids. Excellent entertainment can be found for both kids and inquisitive students.

This guide to family holidays in Guatemala City is protected by the copyright law. You can re-publish this content with mandatory attribution: direct and active hyperlink to www.orangesmile.com.
Guatemala City - guide chapters 1 2 3 4 5 6 7 8 9 10 11 12 13

Amusement parks near Guatemala City
♥   Amusement park 'Xocomil' Retalhuleu, 115.6 km from the center. On the map

♥   Amusement park 'Xetulul Theme Park' Retalhuleu, 115.8 km from the center. On the map

Water attractions around Guatemala City
♥   Water park 'Xocomil' , 115.6 km from the center. On the map 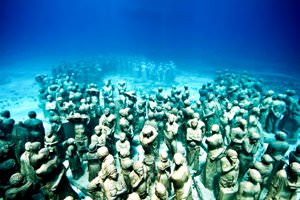 Distance from Guatemala City center - 72.3 km.
Researchers have discovered ancient ceramics, magnificent altars and incense, as well as many beautiful ceremonial monuments at the archaeological area. All of these priceless artifacts confirm the version that the flooding of the rich and prosperous city was sudden. Over time, the water of the oceans receded and formed the beautiful Atitlan Lake, where the ruins of old buildings were discovered. … Read further 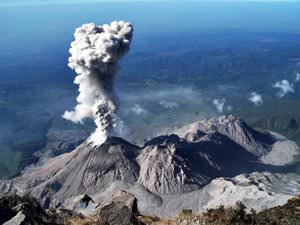 Distance from Guatemala City center - 110.5 km.
Santa Maria volcano is the part of the chain of stratovolcanoes. After the eruption of 1902, it regularly reminds us of its power. Next, the less powerful eruption occurred in 1922. Seven years later, the volcano released into the atmosphere a cloud of easily flammable gas that killed 5 000 residents of nearby towns and villages. The height of the volcano is 3 772 meters. Researchers found out that the first powerful eruption of this structure occurred about 30 000 years ago. … Read further 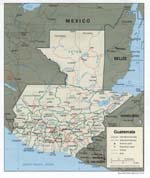 Interesting places to visit with children around Guatemala City

Placentia Village
If these natural attractions seem not enough, be sure to go to the nearby town of San Ignacio. Here, is the unique iguana kennel, Green Iguana Conservation Project, one of the few places in the country where you can literally touch the world of wildlife. In this kennel, iguanas of different types and sizes are represented. Some of them are very small and can easily sit on the ... Open »
Merida
One of the most mind-blowing parks in the city is Acuaparque – it is not a classic park in the usual sense of the word. The primary feature of this park is its beautiful lake. This beautiful natural oasis has become home to dozens of birds species. It is extremely interesting to watch the inhabitants of the park. Many individuals come here specially to feed the birds. In ... Open »
Cozumel Island
Be sure to visit Discover Mexico Park with your child, where you can see miniature copies of all the famous Mexican attractions. If your child loves hiking and is interested in botany, be sure to explore at least a few routes of the national Parque Chankanaab Park, where you can see dozens of exotic plants. There is also a very beautiful lake, but it is prohibited to swim ... Open »
Cancun
Among the entertainment centers of Cancun worth noting is Ventura Park, aimed at visitors with children of different ages. There are a lot of colorful rides and carousels in the amusement park, and even a small water park with bright slides and fountains. For those who on a hot day prefer to relax in a closed cool room, a special pavilion with various slot machines is ... Open »
Escazu
Those who would rather prefer water activities will love Kalambu Hot Springs. This water park is literally buried in lush greenery, very beautiful pools and dozens of rides are quipped among exotic plants here. Here you can also find well-liked slides, a lazy river, playing complexes for the smallest ones, as well as spacious terraces for sunbathing. This water park is known ... Open »
Acapulco
Small travelers who are not fond of snorkeling will also have the opportunity to see the amazing underwater inhabitants. They can visit the Mundo Marino Aquarium. This aquarium is one of the largest in Mexico and is a multifunctional entertainment complex on the territory of which there are interesting attractions, restaurants and bars, as well as a beach club. The aquarium ... Open »

Guide to sightseeing and entertainment for children in Guatemala City - parks, attractions, museums, zoos, water-parks. All fascinating and educational sites of Guatemala City, which are must visit and see for your child. Find out the best discovery routes and places for kids (local theaters, exhibitions and museums), where you can spend quality time together. Guatemala City for families with children.