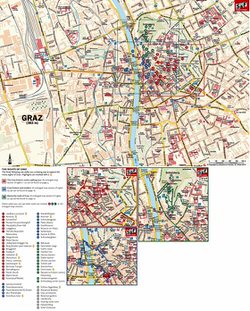 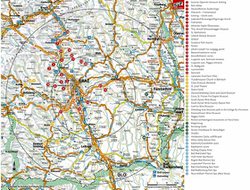 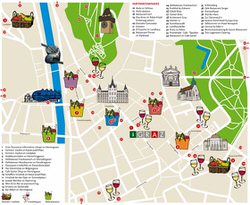 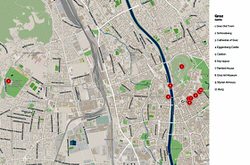 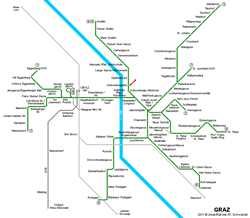 Interactive maps of hiking and biking routes around Graz

1. You can zoom in/out using your mouse wheel, as well as move the map of Graz with your mouse.
2. This interactive map presents two modes: 'Biking Routes' and 'Hiking Routes'. Use the '+' button on the map to switch between them.

This Graz map has two modes: 'Railway Network' and 'Landscape & Rural Map'. Use the '+' button on the map to navigate.

International air communication is well-developed in Austria. Many airports accept domestic flights, but they are less popular. The largest and most significant in Austria is the airport in Schwechat. It is 18 kilometers away from the capital and welcomes both standard and wide-body aircrafts. In 2006, a new terminal was opened, where exclusively VIP aircrafts and charter flights land. Since then, the airport in Schwechat has become one of the busiest in the whole country. The air harbor has shops and souvenir stalls, offices of international banks and currency exchange, cafes and restaurants of various classes, as well as baby care rooms and specially equipped facilities for disabled people. … Open

Overview of festivals and celebrations in Austria

All Saints' Day on November 1, Day of the Referendum on October 10,  and National Day on October 26 are celebrated too. A birthday is an important event for any Austrian. The Austrians are very welcoming and hospitable, but they honor the etiquette and love formalities. If a person is invited, then most likely a full meal consisting of several dishes will be offered. Refusal and leaving early is not polite. Even an invitation to tea or coffee means that there will be a lot of treats on the table, including desserts, pastries and even low-alcohol beverages. You can also take a small gift with you. It can be a bottle of wine, some food or anything else. At parties, it is usually accepted that guests take their own snacks and choose beverages. Usually there is no official feast with compulsory toasts. Each one drinks as much as he or she likes. Many holidays are family ones, so inviting guests to dinners has long been a part of tradition. … Open

Our guide to Graz

Package club also attracts visitors by a rich choice of food and perfectly matched music program. In Package you can hear music of different directions, from modern compositions to classical melodies to the 80s. Fans of Latin music will simply fall in love with Cohibar Graz club, which often organizes performances of popular music bands. On Mondays the club provides its visitors with free dance lessons, so everyone … Open

If you want to try Chinese food, you are recommended to visit Chinarestaurant Konfuzius. This restaurant offers a great menu and unique design of its halls. A part of the restaurant’s tables is served in a beautiful winter garden. The main hall will also amaze you with numerous plants and flowers. There is also a garden of stones next to the restaurant, so after trying delicious national dishes guests can … Open

In order to thank the nature for rich harvest, it was decided to organize various colorful performances. These days this amazing medieval feast is celebrated in a larger scale. The main city park has become the main platform on which most of performances are held. The territory of the park becomes the location of several scenes that attract connoisseurs of contemporary literature, classical music and theater arts. … Open

Among the cultural institutions of Graz, the most recognizable and interesting is the Kunsthaus Museum, which was opened in 2003. This art museum occupies an original futuristic building, which in its outlines is a bit like a whale. From the moment of foundation, only temporary exhibitions are held in the museum. It does not have its permanent exposition. In addition to art exhibitions, it hosts events dedicated to … Open