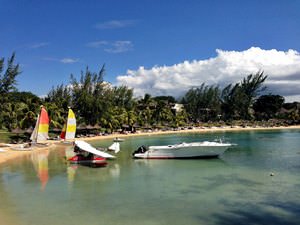 Grand Gaube is known for its multi-ethnicity - the Indian, Muslim, and Chinese diasporas peacefully coexist here. In addition, French, South Africans, and British live in the city permanently. All this together gives a very rich culture, which cannot be ignored. The language mostly spoken by local people is Creole. Ethnic diversity is also reflected in the character of locals, as well as in the national cuisine, traditions, holidays, and culture. Residents of Grand Gaube never refuse to help, as they are accustomed to the influx of tourists and are in fact very good-natured, and there are no exceptions in this case.
Top hotels in Grand Gaube for business trip or short vacation
You can find a hotel for just about every taste in the miniature resort of Grand Gaube. The most prestigious and expensive one is fashionable LUX Grand Gaube. It is located on the territory …

Open
You can't miss your chance to see the local dance Sega. It came from Africa together with the first slaves brought by Europeans and remained in this little paradise as a national tradition. This is a stunningly fiery and fun dance, during which you can feel part of the Mauritian culture as if plunging into its mystery. Women dressed in bright skirts dance like Indian goddesses, luring Mauritian men to dance and fascinating all who are lucky enough to see this action.
A relaxed attitude to life and friendliness are something that distinguishes locals. The main value for them is their family, they know how to enjoy every day and teach this to their children from early childhood. Just like to work - however, they clearly understand that there must be sufficient time for rest. Since the city is small like the island itself, everyone knows each other by face and by name. They're all great talkers curiously listening to the interlocutors and their stories about a particular tradition in their countries. Copyright www.orangesmile.com
Guide to Grand Gaube sightseeing - things to see and to visit
Grand Gaube is a town located not far away from Grand Baie. Many years ago it also was a small fishing village; today this is a resort zone. The population of this town is still mainly …

Open
Just like the island itself, the local cuisine is multinational, which is yet due to the already mentioned fact that here you can meet representatives of different ethnic groups. French, British, Indian, Chinese - here you can try all these cuisines. In addition, due to this diversity, there is a mix of cuisines that gives interesting combinations. The main products are fruits, vegetables, seafood, and fish. Be sure to try the "puri" (a sandwich made from special flour with sauce and a variety of fillings), "samoussa" (puff meat-filled triangles), "curry" (rice with sauce), "bullet soup" (meat dumplings in spicy chicken broth). Beer and herbal liquors, as well as local rum, are popular alcoholic drinks. 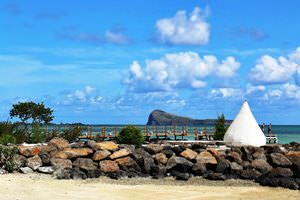 On February 1, Grand Gaube celebrates one of the most important holidays in all of Mauritius (however, it is widely celebrated beyond its borders). He is dedicated to the abolition of slavery, which occurred in 1835. It is a public holiday, and therefore nobody works on this day. It is celebrated with parades, dances and, of course, fireworks, which is the culmination of the festival. Another national holiday is celebrated along with the Day of All Saints on November 2. This is the Day of the First Workers, and more specifically, the day of arrival of the first workers from India. The holiday is official but celebrated in a narrow family circle.
Cuisine of Grand Gaube for gourmet with top restaurants and cafe
The main dish of the national cuisine is curry, which is offered at any restaurant in Grand Gaube. A pleasant surprise awaits connoisseurs of fine dining because the local curry is …

Open
Indian diaspora's holidays always attract heightened attention, being the most colorful on the island. One of the most significant holidays in the city is Kavadi falling on the end of January or the beginning of February. Before the celebration, initiates keep a strict fast for ten days. During the holiday, believers carry kavadi - a bowl of wood, plastic or metal with milk - to the statue of the god Murugan, the son of Shiva. Having poured milk on the statue, people begin rejoicing and having fun - this means life in its true manifestation. This day is painted in orange-yellow, as the procession is followed by people dressed in these colors. It is customary to pierce the tongue and cheeks with a special needle. 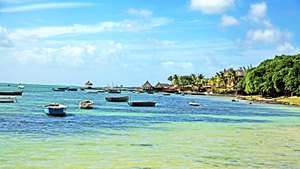 Diwali is probably the most colorful Hindu holiday celebrated in early November or late October. It is dedicated to the victory of the force of good in the face of Rama over the great evil personified by Ravan. Prince Rama freed Lakshmi, the goddess of wealth, thereby filling the whole world with light. And this is exactly what the inhabitants of Grand Gaube are doing during the celebration of the Hindu holiday - it is simply impossible to find a place not illuminated with lights. This applies not only to central streets of the city and Hindu temples but also residential buildings. At this time, all the doors are wide open - it is believed that Lakshmi will be thus able to enter the house to bless believers, giving them a year of prosperity.
Excursion over cultural sights of Grand Gaube - 'must visit' points of interest
The main attraction of Grand Gaube is its beautiful beaches attracting fans of water entertainment from all over the world. Although there are no important historical or natural sights on …

Open
The end of January or the beginning of February is marked by the Chinese New Year, which is also known as the Spring Festival. This is one of the most colorful festivals when the representatives of the Chinese diaspora lead a procession around the city wearing dragon costumes and carrying the statue of a Chinese dragon and a lion, making loud noises with firecrackers - it is believed that this is how evil spirits can be chased away. This is the time of dances, circus performances, and real fun - the event is not complete without it. A festive dinner awaits everyone at home, offerings are made in temples, and the general atmosphere is family-friendly. 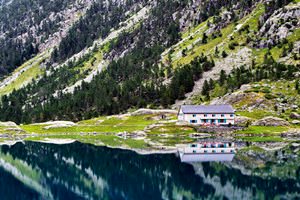 Among adherents of Islam, the most significant holidays are Eid-al-Fitr, which marks the end of the holy month of Ramadan, and Muḥarram dedicated to mourning the death of Ḥusayn ibn ʿAl, which marks the new year. Eid-al-Fitr teaches everyone to be kind, share food and give alms. Muḥarram is a more colorful holiday. At this time, besides prayers, you can witness public festivities called “yamseh”. And that means it's time to get acquainted with the traditions of Muslims in Grand Gaube. As is known, here they are slightly different from traditional Islamic customs in the East. Muslim holidays are assigned dates according to the Islamic calendar.

This guide to traditions and festivals in Grand Gaube is protected by the copyright law. You can re-publish this content with mandatory attribution: direct and active hyperlink to www.orangesmile.com.
Grand Gaube - guide chapters 1 2 3 4 5 6 7

City tours, excursions and tickets in Grand Gaube and surroundings

Cathedrals and basilicas near Grand Gaube
♥   Cathédrale Saint-Louis, Port-Louis, 23.9 km from the center. On the map

Colors of Grand Gaube in photos

Traditions and festivals in cities around Grand Gaube

Grand Baie
Speaking of local markets, their national color should also be noted. Visitors will be impressed by a wide range of products, Grand Baie markets have long ceased to be ordinary trading grounds. Interesting fairs and sales take place here, visitors can enjoy national food, and many go to the market just to meet people they know and spend time with friends. A kind of ritual is ... Open »
Balaclava
In the end of January, local people celebrate Cavadee Festival. The traditional holiday of Mauritian Tamils has very unusual rituals associated with it. Local people make cavadees – bowls that are usually made of wood, metal, or plastic. They fill them with flowers and carry to the temple on their backs. End of February – the beginning of March is the sacred period for ... Open »
Le Morne
Guests of Le Morne wishing to get acquainted with the traditional way of life of the indigenous people must visit colorful villages nearby. Local people are very friendly and welcoming, they are always ready to introduce foreigners into their cultural traditions. Visitors to local villages will enjoy dance and music performances, visiting unique restaurants and trying the ... Open »
Antananarivo
The Republic Day and African Unity Day on May 25 are no less important celebrations, and so colorful processions and parades often take place in the capital. Perhaps, New Year is still the loudest holiday. However, that is not the traditional New Year that many are used to celebrate in the end of December. In Madagascar, people have their own New Year, Alahamadi that is ... Open »
Mahe Island
Surprisingly, people here don’t chase profit. For example, there are almost no typical gift shops or cafes in touristic places, even though those bring lots of money. So, if you ask one of the locals why is it so, they would rather answer that it would only spoil nature for nothing. However, it may also be due to the reason that they don’t perceive tourists as «wallets ... Open »
Victoria
The island of Mahe was not chosen as a place for holding the festival by accident. Its scenic and harmonious atmosphere best fits the scope of the holiday. Tourists are offered numerous exploration tours within the festival. The tours will be of great pleasure for hiking enthusiasts. The routes of the tours run through the most scenic areas of the island. Nature beauty ... Open »

Cityguide on traditions, mentality and lifestyle of people in Grand Gaube. Learn the best periods to visit Grand Gaube to discover its soul - authentic festivals, events and celebrations. We will also reveal the interesting habits, attitude towards the world and to tourists in Grand Gaube.