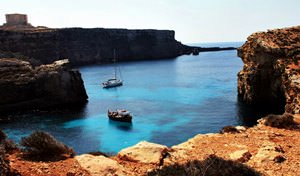 Gozo has its own unique atmosphere. Compared to Malta, the island is not that inhabited and less popular among tourists, so the local pace of life is calm and measured, as it was hundreds of years ago. You just have to adjust to it. Don’t expect the service at the cafes and restaurants to be fast, don’t rush them and don’t disturb their joy of life – then they will gladly help you, give you a heads-up, and answer all your questions. Remember, the tips here are not included in the check, but it’s common to give about 10% of the bill. The Maltese are very hospitable and are nice towards the travelers. That is why you should never decline an invitation for a cup of tea or a coffee. Otherwise, the person you are talking to might get offended. The dinner here usually starts at 19.00, and that’s when the guests are expected.
Top hotels in Comino Island for business trip or short vacation
The island of Comino has only one hotel that can be attributed to a number of local attractions. Comino is situated on the smallest private beach of the Maltese islands located in the bay of …

Open
In the whole, Gozo is one of the safest places in Europe. Not long ago nobody here even locked their doors. However, with the increasing number of tourists and immigrants, the crime rate raised, but it is still the lowest in Europe. You shouldn’t leave valuable things unattended, but you shouldn’t expect a robbery from the locals either. Note one important thing: on Gozo, where people have lived separately for centuries, they speak a distinctive Maltese dialect. Not everyone here speaks English. By the way, don’t be surprised, if a local tells you he has never been outside the island. Why, indeed, would you leave the best place on Earth, where, according to the legend, Calypso fascinated Odysseus with her love charms?
Pay attention to the fancy doorknobs when walking along the street of Gozo’s cities and villages. All the Maltese people have a passion for this element of decor, so you will never see two identical doorknobs here. If you need to know the time, and you look up at the clock in the church tower, don’t be surprised at what you see there. The locals believe that if you put two clocks there and one would show the wrong time, it will protect you from the evil forces. Copyright www.orangesmile.com
Shopping in Comino Island - main shopping streets, outlets and boutiques
If you want to bring back home from Gozo something edible, pay your attention to the local honey and cheese. Honey here is more of a traditional souvenir, although, they use a unique …

Open
When talking to the Maltese, remember, they are very religious and family people. Malta is the only European country, except for the city-state of Vatican, where the abortions are still illegal. Until recently, the divorce was also impossible. Now the divorce is legal, but it’s still very hard to get one. That is why, if you want to impress the locals, tell them about your family. Never ever compare the Maltese to the Tunisians and other migrants, whom there became a lot of on the island over the past few years. The Maltese are very proud of their origin and their country, so it’s pointless to argue with them on political and national issues. 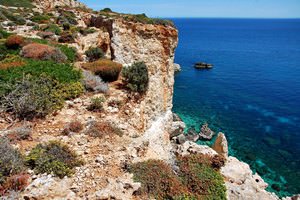 You shouldn’t sunbathe topless or naked here, even on the remote beaches. Such a behavior offends the feelings of the locals. The piety of the local inhabitants is also shown during the holidays, most of which are connected to the important dates of the Christian world. Before Christmas, there emerges a Christmas village in Anslem with the real animals and the baby in the manger. There are a lot of workshops of the local craftsmen on the territory of the village. There are such huge processions on Easter, that even people from Malta come here to see them. The carnival in Nadur during Lent is also popular. It’s much more wild and dark, then the one their neighbors have, with a hint of political satire, which the tourists usually don’t get. Malta’s Independence Day is also celebrated in a big way. There are a couple of folk festivals in Gozo in Autumn as well.

This guide to traditions and festivals in Comino Island is protected by the copyright law. You can re-publish this content with mandatory attribution: direct and active hyperlink to www.orangesmile.com.
Comino Island - guide chapters 1 2 3 4 5 6 7 8 9

Cathedrals and basilicas near Comino Island
♥   Bażilika San Gorg, Victoria, 0.6 km from the center. On the map

♥   Katidral Metropolitan Ta’ San Pawl, Mdina, 23 km from the center. On the map

Survived castles around Comino Island
♥   Castle 'Gran Castello' , 0.5 km from the center. On the map

Unique landmarks in Comino Island and around 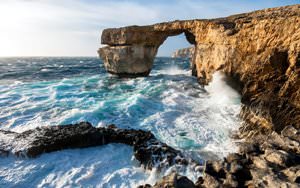 Distance from Comino Island center - 5.1 km.
The picturesque Maltese island of Gozo has an amazing landmark - the natural arch named Azure Window. It was formed in a limestone rock, which extends far into the sea. This natural attraction has got its name due to a special azure colour of the coastal waters. … Read further

The Maltese are very open and friendly people. They hospitably welcome visitors and tourist. Language tourism is very developed in the country. Many families accept students and schoolchildren from other countries for training. The Maltese have an excellent sense of humor and cheerfulness. They are incredibly curious and are happy to ask visitors from other countries about where they work, what they do, and for what purpose they came to their state. This trait was transmitted to them from no less curious neighbors - Italians. The Maltese are incredibly loyal – all their lives they cheer and support the same football club and stick to the same political beliefs. This feature extends to both young and adult Maltese. … Open

Colors of Comino Island in photos

Traditions and festivals in cities around Comino Island

Malta Island
The same impressive and striking feature of Malta local folks is their passion for music. Each village and town of Malta definitely has its own orchestra or band. Their performances feature each fest and holiday celebration. Speaking of national character traits, devotion and conservatism are in the focus. The features are peculiar to people of all ages. Maltese can be said to ... Open »
Valletta
Local people are very friendly and open-minded. They are always glad to meet new guests and treat foreign tourists with curiosity and trust. Valetta locals do not like to hurry. They will never try to finish all tasks in one day and can easily postpone all non-urgent tasks. Foreign tourists always mention friendliness and openness of local people and say that Valetta ... Open »
Catania
Inhabitants of the city are very passionate about theater and music. Every cultural event here is a real holiday. It should be noted that in the local theaters visitors are always served by waiters. Offering refreshments and snacks during the premiere of a new play have become a kind of tradition in each theater. The cost of food is already included in the price of a ticket. ... Open »
Sicily
Main events of the holiday are colorful parades that resemble theatrical performances. In evenings during the festival, dances are arranged; squares and gardens are transformed into colorful dance floors. Travelers who want to appreciate the beauty of local traditions are sure to visit the Sicilian puppet theater presentation of Opera dei Pupi that is shown during all major ... Open »
Palermo
Each year the festival adds ever new original entertainments to keep the public hot and inspired. Engaging events are held for children, some of the events have gained a family format. Throughout the day original contests and competitions continuously take place. Besides, beach area features exciting performances and competitions in kitesurfing, windsurfing, sky jumping and ... Open »
Calabria
Sagra delle Range or the Festival of oranges is held in the sunny town of Trebisacce; it’s a very bright and symbolic holiday full of fun and unusual entertainment. Montegiordano is famous for its peas and beans grown on local fields; these vegetable crops also have their special holiday. Strawberry lovers are recommended to visit Acconia. There, a colorful strawberry ... Open »

Cityguide on traditions, mentality and lifestyle of people in Comino Island. Learn the best periods to visit Comino Island to discover its soul - authentic festivals, events and celebrations. We will also reveal the interesting habits, attitude towards the world and to tourists in Comino Island.