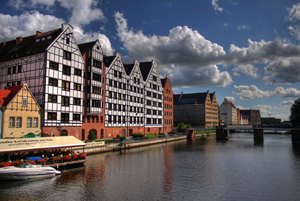 Any guide of Gdansk would be incomplete without a review of its most impressive architecture monuments - Oliwa Cathedral, National Museum, Amber Museum, Kosciol sw. Jana, Kosciol sw. Mikolaja and many others. It’s difficult to overestimate their historical and cultural importance for Poland. The style and architecture of any of these landmarks are worth a visit when you are on vacation in Gdansk. However, you can virtually visit any of these wonderful monuments without leaving your comfortable chair. For that purpose, simply 'fly' over the 3D model of Gdansk that was created by OrangeSmile and GoogleEarth. All you need to do is to click the video on this page. 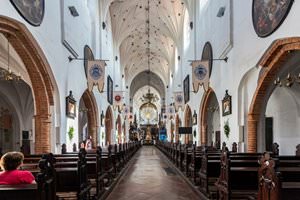 Facts:
» The Oliwa Cathedral dedicated to the Holy Trinity, Blessed Virgin Mary, and St. Bernard was part of the monastery founded by Cistercian monks in 1186. It was often robbed and set on fire by the Prussians.
»  In 1350, a new stone cathedral was built. It was considered the major one in Pomerania. Local noble people were buried here.
»  Its size makes it the longest cathedral in the world. The facade of the church is made up of two high thin towers, between which there is a strict 1688 portal.
»  Inside, the church is decorated with 23 marble altars. The main one was made in 1605. 83 years later, it was replaced by another one.
»  The church has another valuable – an old organ (1763-1788) made by monk Johann Wulff. It consists of 7,896 pipes and 110 registers.
»  It has a distinctive feature: when it plays, the cherubic figures adorning the organ begin to move. The organ can play the murmur of water, human voices, and animal sounds. Since 1957, the Oliwa Cathedral has hosted the International Organ Music Festival, which the best organists take part in.
»  The cathedral has a museum exhibiting religious objects of the 14th-16th centuries. 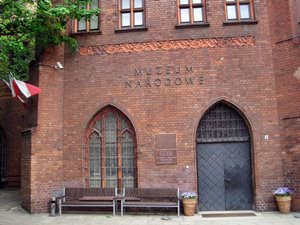 Facts:
» The National Museum is located in the old Franciscan monastery (1422-1522). The museum’s collection consists of art objects granted by noble families from Gdansk and Pomerania.
»  For example, there’s Jacob Kabrun’s (1759-1814) collection bequeathed to the city. It had thousands of paintings, prints, and drawings by European artists of the 15th to 19th centuries.
»  There is also a collection of paintings by Gdansk artist Anton Möller (1563-1611).
»  The Last Judgment, a triptych by Hans Memling (approx. 1472), which originally adorned the altar in St. Mary’s Church, returned to the Gdansk Museum only in the 1950s. First, the French stole the triptych and sent it to the Louvre; during the German occupation, it ended up in Germany; then it was taken away to the Soviet Union, where it was kept in the Hermitage until it was brought back to its homeland.
»  The museum has seven sections – from ancient to modern art – displaying paintings, ceramics, and sculptures. 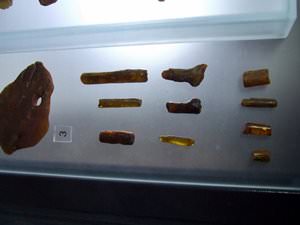 Facts:
» The Amber Museum was opened not so long ago, in 2006. It is located in an old fortress. It served as medieval jail once.
»  The first exhibition stands the visitors see displays pieces of rough amber found at different times. It is a natural material of different colors. Some exhibits include pieces of insects and plants.
»  Then, the visitors enter the hall that houses old amber items made by masters of that time (crockery, caskets, and accessories).
»  As for contemporary exhibits, you can see fashionable jewels, stylish accessories, and other unique items.
»  The last exclusive exhibit is the inclusion of a lizard in the amber gum. It was found by a local resident in 1997 at the beach. It is named “Gierłowska Lizard” after Gabriela Gierlowska, an amber master. It is a rare specimen, the first in Poland and the second in the world. 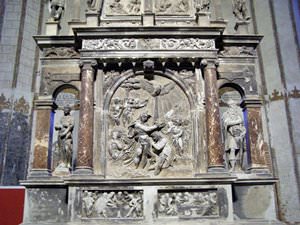 Facts:
» Kosciol sw. Jana is a valuable historical monument of Gdansk. It started to be built in 1360.
»  In 1598-1611, a 12-meter stone altar was made by the old master Abraham van den Blocke. The altar has been preserved to this day.
»  During the Second World War, the church was almost destroyed. Its well-preserved church utensils were delivered to other churches. The ruins of the church have been unchanged for many years.
»  Only in 1960, it started to be restored. It is still being reconstructed today. Already in 1998, services started to be held on Sundays and holidays here.
»  By the agreement between the city Diocese and the Baltic Culture Center, symphony concerts, opera performances, and exhibitions are held at the church. 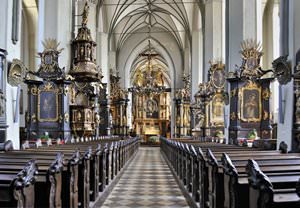 Facts:
» Kosciol sw. Mikolaja has a long history. It dates back to 1185 when a small wooden church was built. The church was named after St. Nicholas, a patron of merchants and travelers.
»  In 1227, the church belonged to the Dominican Order. A monastery was founded here. Monks built a new church near the old one and it has survived to this day.
»  In the period of the Reformation, the monks were expelled from the monastery that was looted. Due to King Sigismund II August’s intercession in 1567, the monks returned to the monastery.
»  In 1587, Sigismund III was proclaimed king at the church. The king expressed his commitment to contribute much to the development of the church and the monastery. In the church, an organ and a new altar were placed. Also, a chapel was built. In 1834, the monks abandoned the House of God and left the city.
»  During the war, the church was not been damaged. It says that the abbot took kindly to Red Army men and treated them with alcohol so they did not burn or loot the church.
»  111 years later, in 1945, the representatives of the Dominican Order returned to the city and the church.

Facts: » The Old Town City Hall was designed by the Dutch architect Anthonis van Obbergen in 1589. This building seated the city authorities.
»  Jan Heweliusz, a Polish astronomer, had worked in the city council for some time. His house is located near the City Hall. In front of the City Hall, there is a monument of the famous Pole.
»  Inner rooms were refurbished in the period between 1911 and 1914. Many construction materials and decorative elements were taken from rich citizens’ houses.
»  For example, the Lower Hall is decorated with an old portal (1517). The ceiling is decorated with picturesque paintings of the 17th century that were painted in German Khan’s art workshop. In the Bourgeois Hall, you can also see paintings of the 17th century.
»  The most beautiful hall is the Upper one that is finished with Dutch tiles from Delft. Despite the war, the interior of the halls has been survived to this day, as the building was not damaged.

This guide to architecture monuments in Gdansk is protected by the copyright law. You can re-publish this content with mandatory attribution: direct and active hyperlink to www.orangesmile.com.
Gdansk - guide chapters 1 2 3 4 5 6 7 8 9 10 11 12 13 14 15

Plan your own tour over Gdansk on the monuments map

Search for architecture monuments of Gdansk on the map

Tours through neighbours of Gdansk

Warsaw
The Palace of Culture and Science is the tallest building in Poland. The building was constructed using the model of Soviet Stalinist skyscrapers as a gift of the Soviet Union to the Polish people. Nowadays, the Palace of Culture and Science is one of the ten highest skyscrapers of the European Union. The height of this 42-storey skyscraper is almost 168 meters, or 237 meters with a spire. The building has 3,288 rooms. Today the skyscraper ... Open »
Berlin
Brandenburg Gate is the only surviving city gate in Berlin. Decoration of Brandenburg Gate was designed by Johann Gottfried Schadow. He also designed six-meter quadriga controlled by the goddess Victory. After winning Berlin, Napoleon ordered the chariot to dismantle and carry him to Paris. After the victory over Napoleon, goddess Victoria returned to Berlin and got the Iron Cross. During World War II, the Brandenburg Gate was badly damaged ... Open »
Copenhagen
A legislative body of the Copenhagen Municipality has been located in the city hall since 1905. It's the sixth building since it was first built. The previous ones were either destroyed by fire or fell into decay. The first building dates back to 1479. The modern building is an example of Scandinavian architecture in the style of Nordic modernism. It’s the highest construction in the city – almost 106 metres. There’s a viewpoint which ... Open »
Vilnius
The temple of God was built at the site of the Pagan temple, which is reflected in the masonry of the 13th century. The nobles were crowned in the old Vilnius Cathedral. The eminent nobles are buried in underground tombs (there are over 20 tombs). Nowadays, public ceremonies are held here. Over the years of its existence, the building was repeatedly destroyed in a fire and rebuilt. The cathedral has gained the highest status, a small basilica. ... Open »
Riga
Riga Cathedral is one of the oldest attractions in Riga and all the Baltic States. Rigas Domes is translated from Latin as “The House of God”. The first stone was solemnly laid on 25 June 1211. This ceremony was visited by the first bishop Albert von Buxthoeven. The construction of the cathedral was completed in 1270. Over the centuries, the cathedral had been destroyed and reconstructed many times, so its exterior combines features of ... Open »
OrangeSmile.com - online travel reservation expert providing reliable car rental and hotel booking services. We feature more than 25.000 destinations with 12.000 rental offices and 200.000 hotels worldwide.
Secure Server