Sightseeing in Galapagos - what to see. Complete travel guide 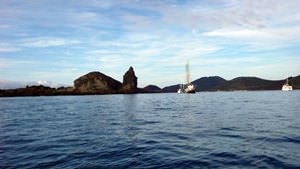 The Galapagos Islands are a picturesque sunny paradise that impresses tourists with nature attractions and clean sandy beaches. The weather here is hot and sunny all year round, so there are the perfect conditions for beach recreation and water entertainments.
Cuisine of Galapagos for gourmet with top restaurants and cafe
It is safe to say that each traveler will find a national dish to taste here. Local cooks actively use different ingredients and food processing methods when cooking. They cook interesting …

Open
The biggest island of the archipelago is Isabela. There are several picturesque lagoons and striking attractions on its territory. Travelers should also visit the Urbina Bay where a lot of turtles, penguins and iguanas dwell. Mangrove groves called Punta Morena will impress you with a diversity of flora. Here, you can see the rarest species of exotic plants and flowers. There is the magnificent volcano Sierra Negra, which crater is almost 10 km and included in the top 5 biggest craters of the world.
The most populous island of the archipelago is Santa Cruz. There is the most popular tourist center of global significance on its territory, Puerto Ayora. Fashionable hotels, a lot of different restaurants and cafes, unique attractions, and cozy beaches make this resort one of the most popular holiday destinations in the world. In the city, there is a famous research station named after Charles Darwin. It is aimed at controlling the breeding of turtles, as over ten species of them dwell on the island. Copyright www.orangesmile.com
Authentic traditions, festivals and lifestyle of Galapagos inhabitants
The main feature of the Galapagos Islands is its wonderful nature. More than 90% of the archipelago is a protected area. The tourists can move around its territory only with a guide. This …

Open
Fernandina Island is also rich with nature attractions and attracts divers. If you scuba dive here, you can see incredibly beautiful coral reefs and a lot of colorful fish. You will experience unforgettable emotions walking through tropical thickets where you can see rare butterflies and birds. 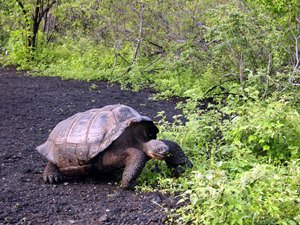 The “darkest” Galapagos island is San Salvador. The matter is that the vast territory of its coastal zone is occupied by black volcanic rocks. As for local volcanoes, Santa María Island should be mentioned too, as there is the huge crater of the extinct volcano. This nature attraction is called “Devil’s Crown” for its unusual shape. Inquisitive travelers can climb up the top of the volcano and admire the panoramic view it has. Each of the Galapagos Islands is unique and inimitable. Travelers are very impressed by their beauty and come back here again and again.
Your active city break in Galapagos. Attractions, recreation and entertainment - best places to spend your day and night here
The archipelago is a large protected area, some part of which is allocated to tourist areas. The travelers’ main entertainments are walks along picturesque places. They can also drop …

Open
Unique natural landmarks remain the main treasure of the archipelago. At the moment, as much as 90% of the islands’ territory is occupied by the national park. It is a fabulous place to watch albatrosses and rare sea turtles. Among visitors of the islands, there are many not only curious travelers but also scientists. Currently, there are more than 60 different trails in the national park. However, tourists need to remember that they are allowed to explore it only together with a guide. 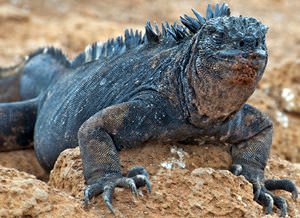 Hispaniola Island is, without a doubt, one of the most interesting destinations for all eco-tourists. This island is located in the southern part of the archipelago. The picturesque piece of land is home to waved albatrosses – the beautiful birds nest on the island, and this is the only place where they nest. All exploration trails for tourists cover the coastal territory where they can admire iguanas, seals, and other rare marine animals.
Advices to travellers: what you should know while being in Galapagos
1. Despite the fact that the climate in the islands is quite hot, it is easily endured. It most often rains in the period from December to April. Despite this, the weather is the hottest at …

Open
There are several scientific and research stations on the island, and tourists are welcome to visit some of them during excursions. One of the most interesting stations is open in Puerto Ayora and is named after Charles Darwin. During an excursion there, travelers will learn interesting information about unique animal world of the Galápagos Islands. Many local animals are not present anywhere else in the world. The main aim of the research station is to take care of the rare sea turtles and help to increase their population. There are more than ten species of these sea animals on the island. On a particular time of the year, travelers can see a unique picture – numerous small turtles appear on local beaches and head to the water. 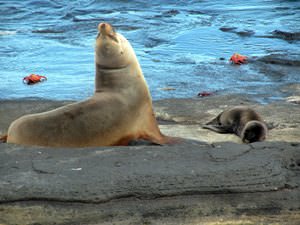 Not many know that the Galápagos Islands are home not only to turtles but also to penguins. The majority of penguins live near Elizabeth Bay on Fernandina Island. This area is also home to one of the largest populations of pelicans. Divers are simply in love with local beaches because there are magnificent coral reefs not far away from the shore. The archipelago includes several dozens of small uninhabited islands, and excursions to them are always very popular. The period starting from December and until May is considered the best time to visit the Galápagos Islands. This is the time when sea turtles lay down their eggs, so it is possible to see these rare creatures on all islands of the archipelago.

This guide to iconic landmarks and sights of Galapagos is protected by the copyright law. You can re-publish this content with mandatory attribution: direct and active hyperlink to www.orangesmile.com.
Galapagos - guide chapters 1 2 3 4 5 6

City tours, excursions and tickets in Galapagos and surroundings

National and city parks around Galapagos
♥   National Park 'Galápagos' , 74.7 km from the center. On the map

Sights around Galapagos from our guide 'Extreme places on Earth' 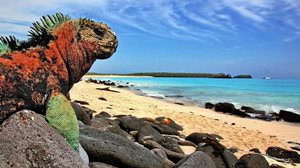 Distance from Galapagos center - 16.7 km.
The largest island of the archipelago is Isabela island. There you can not only walk in a picturesque area but also visit locals and their houses. Travellers will like this place so much. Rabida island has marvellous Martian sceneries. During one of the volcanic explosions, there has appeared the stone high in the iron soil. That explains the unusual red colour of the earth. The most populated island in the archipelago is Santa Cruz island. There travelers can walk in a picturesque mangrove and see wonderful lava tunnels. … Read further

Among multiple landmarks of the city, it’s important to mention the President Palace, the Independence Square, San Diego Monastery, San Francisco and La Compania Churches. The Museum of Colonial Art exhibits large collections of works of famous Latin American artists. Many interesting artefacts can be found in the Museum of Natural History and Archaeological Museum. They throw light upon the history of Ecuador and let visitors know more about culture of ancient tribes. This is a true journey to the past. The best way to get acquainted with traditions of local people and try national dishes is to visit the newer part of the city. There are many small restaurants that serve local food there, and squares often become the scene for numerous theatre and music performances. … Open

Search touristic sites on the map of Galapagos

Sightseeing in regions nearby Galapagos

Manta
The majority of travelers need to fly to Ecuador to reach the gorgeous resort city of Manta. The flight from Europe can be really long – up to twenty-four hours. Having landed at one of the nearby airports, vacationers can call a taxi or buy bus tickets to the central part of the resort. If you book a transfer beforehand, the taxi driver will wait for you at the airport, ... Open »
Guayaquil
The beauty of Guayaquil is hidden in its amazing from architectural point of view embankment with moorage. From time to time a small and beautiful sailing vessel named “Guayas” ties up at the moorage. Nearby are located two amazing parks. One of them is older; it is a cozy and relaxing place where you can find tamed squirrels and motionless iguanas. The second park is more ... Open »
Escazu
The capital of the country is named San Jose. This place attracts travellers by its mild climate and unique atmosphere. At a glance the city may look like an ancient Spanish settlement, because here have survived numerous old houses. However, near them you will see new tall buildings created according to best traditions of modern architecture. The center of the city is defined ... Open »
San Jose
Not far away from the central square you will find another one named Plaza de la Democracia. The former barracks of Bellavista are located here. Nowadays these barracks have been turned into a national museum, an amazing museum of jade, several administrative agencies and Parc de la Ekspreson that has become a home place to the exhibition of works of the talented local ... Open »
Granada City
Buses connect the capital of the country, Managua, to Granada City. One hour later, the bus driver will stop in the city of your destination. When departing from Ometepe, the bus ride will be somewhat longer – roughly two hours. The longest route starts in Costa Rica and lasts three and a half hours. As Granada City is not big, it is comfortable to explore it on foot. ... Open »
Managua
Would you like to visit the most interesting place in Nicaragua? There is an incredibly interesting museum in Managua, which is called Traces Archaeological Museum Acahualinca. Why is this establishment so unique? The exhibits in this establishment feature traces of the ancient people who lived here during the prehistoric times. Besides traces of ancient people, visitors can ... Open »

All about Galapagos, Ecuador - sightseeings, attractions, touristic spots, architecture, history, culture and cuisine. Prepare your trip together with OrangeSmile.com - find out the 'must see' things in Galapagos, which places to visit, which excursions to take, where the breathtaking views are waiting for you. Planning your trip with this travel guide will help your to get the most out of Galapagos in few days.