Sightseeing in Guayaquil - what to see. Complete travel guide 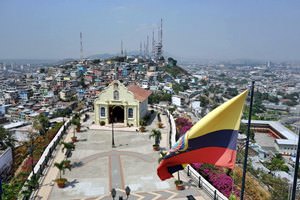 Guayaquil is one of the largest cities of Latin America. The population of this city varies around 2 million of inhabitants. Guayaquil is a large city with relatively well-developed industry and infrastructure. Only in Guayaquil you can find a chain of the largest supermarkets in whole Ecuador. One of them is Mol del Sol that can be translated as “a big sun”. The supermarket occupies several quarters of the city. This is a large trading center, which huge area has enough space, seems, for everything – Internet cafes, banks, shops, playing areas for children, a movie theater and a large café with space enough for 500 people.
Shopping in Guayaquil - main shopping streets, outlets and boutiques
Guayaquil offers its guests places for shopping for all tastes. The largest shopping center in the city is Mall Del Sol. It will please with a variety of attractive budget and luxury …

Open
The beauty of Guayaquil is hidden in its amazing from architectural point of view embankment with moorage. From time to time a small and beautiful sailing vessel named “Guayas” ties up at the moorage. Nearby are located two amazing parks. One of them is older; it is a cozy and relaxing place where you can find tamed squirrels and motionless iguanas. The second park is more modern and this is the central park of Guayaquil.
Despite the fact Guayaquil is not big in terms of space this city is a home to one of the largest universities of Ecuador – Espol. There are also numerous factories and plants, and a stadium with a large number of sports halls. The stadium is one of the biggest ones in Ecuador and often hosts competitions and other events. Copyright www.orangesmile.com
Family holidays with kids in Guayaquil. How to entertain your child, things to show to children.
In Guayaquil, holidaymakers with children will have the opportunity to visit unique sights, similar to which, one cannot find in any other city. Here you can see the amazing Parque de las …

Open
Among obligatory touristic sites of the city, the St. Peter's Cathedral should be noted. The very first church on this place was constructed in the period of the early Middle Ages. For years of existence, it seriously collapsed more than once from fire and has also been repeatedly damaged during attacks of pirates. In 1695, the church was moved to a new place, where it has constantly remained since then. In 1948, the last major reconstruction of the cathedral took place during which it was tried to restore its original state as much as possible. 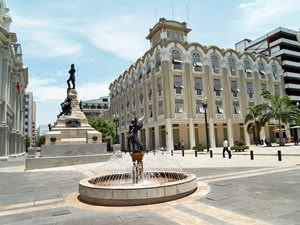 Today, the most picturesque historical region of Las Peñas is located at the top of the hill of Saint Anne. Once in these parts, the wealthiest residents built mansions. In these magnificent houses lived many famous people including Simon Bolivar. Like many years ago, today at top of the hill is located the beacon. To rise to it, it is necessary to overcome a steep staircase which contains 444 steps. From the platform surrounding the beacon, a smart panoramic view of the city opens. Also It should be noted that in the historical quarter, are located national restaurants most popular in the city.
Cuisine of Guayaquil for gourmet with top restaurants and cafe
National cuisine is distinguished by an abundance of vegetable dishes and exotic fruits, as well as dishes based on rice and original meat delicacies. One of the main features of the local …

Open
The Centenary Park enjoys wide popularity, among fans of the nature and walks in fresh air, it was founded in 1920. The area of this park is more than 20 hectares. In its territory, there is a set of paths for foot and bicycle walks, sports grounds, equipped playgrounds for children, and a lot of cozy places for quiet and lonesome rest. For many years, this well-groomed park has been the constant venue of various cultural events. It will be especially interesting to be visited on one of national holidays. 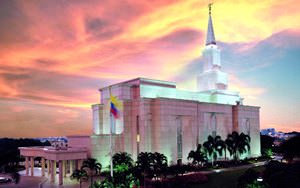 It will be interesting for travelers who are interested in ancient architecture to visit the General Cemetery Guayaquil. It was founded in 1843 and now in its territory, there are some of the most beautiful crypts. It is possible to see fine monuments of various periods here. In 2003, this historical cemetery was recognized as a sight of state value. At this cemetery outstanding political and military figures are buried. The main value of the complex is ancient monuments. The best masters from Italy and France worked on their production.

This guide to iconic landmarks and sights of Guayaquil is protected by the copyright law. You can re-publish this content with mandatory attribution: direct and active hyperlink to www.orangesmile.com.
Guayaquil - guide chapters 1 2 3 4 5 6 7 8 9 10 11 12

National and city parks around Guayaquil
♥   National Park 'Cajas' , 104.4 km from the center. On the map

Sights around Guayaquil from our guide 'Extreme places on Earth' 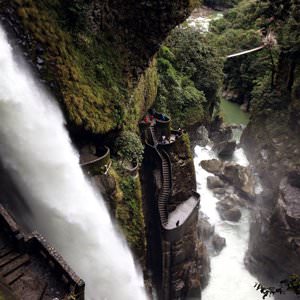 Distance from Guayaquil center - 174.5 km.
The staircase has also some interesting secrets. It is connected to narrow passages in the rocks. Through these corridors, one can get as close as possible to the streams of the waterfall. But some of them are so small that it is necessary to move around them literally on all fours. After walking up the steep stairs and replenishing your photo archive with spectacular pictures, you can go to a more comfortable and relaxing part of the rest. At the foot of the waterfall there are several attractive restaurants and recreation areas, where you can relax and just enjoy the surrounding natural splendour. … Read further

It is also important to mention the city of Cuenca, which is well-known because of the Tomebamba River. There are many historic buildings and squares located on the banks of the river. Travellers often visit El Cajas National Park. The territory of the park includes several hundred lakes and lagoons, as well as the internationally famous Ingapirka religious centre. … Open

Search touristic sites on the map of Guayaquil

Sightseeing in regions nearby Guayaquil

Manta
Nowadays, Manta is a modern city with a population of twenty hundred and fifty thousand people. Fishing is still the main occupation of the local people. Tuna from the Pacific Ocean is the main catch here. Until the midsummer of 2009, a military base of the United States was located near Manta. Called Eloy Alfaro Air Base, this FOL base specialized in anti-narcotics military ... Open »
Bogota
Bogota also has some architectural and historical sights. Among them is Caterdal Cathedral that was built in 1572-1610, and renovated in 1998. This cathedral is located on Plaza Bolivar. Also don’t forget to visit the President Palace as here you can see a picturesque ceremony of changing the guard. Finally, we simply cannot fail to mention Santa Clara church and San ... Open »
Medellin
In addition to sightseeing guests of the resort will definitely have a lot of fun. Nightlife lovers will find numerous entertaining programs that are organized on Thursdays and Saturdays. Medellin has become the venue for the annual carnival of flowers Fier de Las Flores. Best florists of the country participate in this festival, so here take place numerous events and ... Open »
Lima
Other sights of this place are the monastery and church San Francisco, Museum of gold that features a great collection of gold and silver jewelry with precious stones, Museum of Ceramics of Raphael Larko Herrera, Museum of Archeology and Anthropology, and many more. The museum of ceramics exhibits several interesting collections of ceramics of pre-colonial Peru, golden and ... Open »
Panama City
Here you can see the buildings that represent various architectural styles. The area named Casco Antiguo features more than eight hundred of beautiful buildings, with each one each unique and beautiful in its own way. The area named Casco Viejo is the location of one of the most important architectural places of interest - Las Bovedas Castle. It is located on the coast, and ... Open »
Galapagos
The most populous island of the archipelago is Santa Cruz. There is the most popular tourist center of global significance on its territory, Puerto Ayora. Fashionable hotels, a lot of different restaurants and cafes, unique attractions, and cozy beaches make this resort one of the most popular holiday destinations in the world. In the city, there is a famous research station ... Open »

All about Guayaquil, Ecuador - sightseeings, attractions, touristic spots, architecture, history, culture and cuisine. Prepare your trip together with OrangeSmile.com - find out the 'must see' things in Guayaquil, which places to visit, which excursions to take, where the breathtaking views are waiting for you. Planning your trip with this travel guide will help your to get the most out of Guayaquil in few days.