National traditions of Fiji. Habits, mentality and the way of living 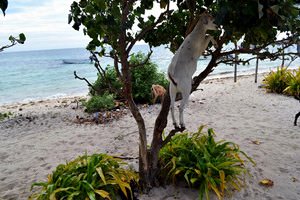 Fijians are an original people, whose ancestry came about as a result of the mixing of several ethnic groups of the Pacific Ocean region. In the modern culture of the archipelago, ancient beliefs coexist with Christian customs, and the traditional way of life is mixed with the attributes of a democratic public order. In spite of the historically propagated reputation of being aggressors and cannibals, today’s residents of Fiji are considered one of the friendliest people on the planet. The inhabitants of the islands are the only ones in Oceania, who are genuinely proud of their past. The more respect for local traditions a tourist demonstrates, the more hearty reception he or she receives.
Things to do in Fiji - active leisure
Fiji is a true paradise for lovers of active leisure. On the archipelago, have been created amazing conditions for surfing and windsurfing, diving, …
Read further
Historically, at the basis of the Fijian society lay the communal-tribal system. Each “yavusa” (a tribe with one common ancestor) included several “mataqali” (clans), which in turn were divided into “tokatoka” (families of close relatives). Each tribe was ruled by a leader – “turaga-ni-koro”. Special honor was enjoyed by elderly members of the community, who usually looked after the children. Respect for the elders is inherent in the culture of Fiji. This is still the case today. Traditional views on the family life are determined by the features of the former social system that remain relevant to this day. While women do house chores, men provide for them and their children.
Fijians pay enormous attention to the upbringing of children. The first thing that a child learns with training is the rule of proper behavior in society. The highest virtues are humility and tolerance towards representatives of different social strata. In the culture of behavior, respect for others is placed first. This is expressed in the rare manifestation of feelings and personal experiences, and the refusal to use high tones during conversations – a loud voice is regarded as a manifestation of anger and hostility. Residents of Fiji are famous for their attentive attitude towards guests, including foreign tourists. As a sign of greeting, a Fijian may present a gift, which is not to be refused, so as not to offend the giver. Gratitude for the honor given can be presenting a gift in return. Copyright www.orangesmile.com
What you need to know about Fiji prior to visit - advices
1. For beach holidays, it is best to travel to Fiji anytime from June to October as hurricanes often occur on the archipelago from November to April. …
Read further
In Fiji, it is not accepted to lock doors. This shows that they are always open to receive guests. When visiting the home of locals, you should give the owner a small souvenir – “sevusevu”. Traditionally, it is a package with crushed dry yaqona root, cigarettes, and a bottle of wine. In the villages, the most valuable gift is the tooth of the sperm whale “tabua”. Fijian feast does not involve special ceremonial rituals, but in some cases however, a number of formalities are observed: the guest is first entertained, followed by the eldest person as a respect to age, then men and children in order of priority. The meal consists of a main course (“kakana-dina”) and a garnish (“icoy”). Family members and their guests sit around the mat on which the dishes are presented. The ritual of drinking yaqona is of interest as well – it is an important part of a festive lunch, after which dances and other entertainment events begin. 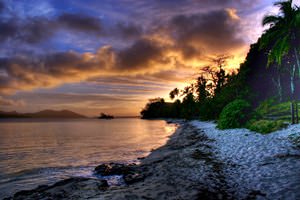 Dance is an integral part of the culture of the Fiji Islands. They are an accompaniment to all the significant events: from birthdays or funerals, to weddings and the conclusion of trade transactions. Traditional men’s dances are the military war styled “sibi” or “meke”, which are performed with spears and shields. Women’s dances include “vata”, formerly served to insult and weaken the spirit of the captives. The song and dance tradition came to the islands with Indian migrants. Missionaries brought with them a culture of religious songs, and today Fijian church choirs have achieved resounding success in different parts of Oceania.
What to see and what to visit in Fiji with children
Vacation with children in Fiji is a real adventure as the Islands are blessed with exotic nature, snow-white beaches, a gentle sea, and many options …
Read further
The internal emancipation of the Fijians is manifested in their habit of dressing freely. The usual element of the everyday wardrobe of both men and women is a dark gray “sulu” – a skirt with a characteristic smell. Fijian women are known to have perfectly mastered several ways of wearing “sulu”. They often include it even in the evening costume. In villages you can often see women dressed in saris, and the men wearing a long dress referred to as “muumuu”. The main rule in clothes is modesty and restraint. It is therefore advisable that when you go on a visit, you should give up sports suits and clothes that expose a lot of flesh. When visiting the countryside, you should avoid wearing a hat, as this is the Prince’s privilege. At the entrance to the house, it is customary to take off your foot-wear.

This article about national traditions in Fiji is protected by the copyright law. You can re-use the content, but only under the condition of placement of an active link to www.orangesmile.com.
Fiji guide chapters 1 2 3 4 5 6 7 8 9 10 11 12 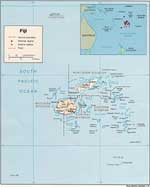 Famous sites of Fiji in pictures

Unique traditions in cities of Fiji

Nadi
When it comes to the look, everything here is pretty simple – the so called “sulu” skirt is popular among both men and women. Many tourists consider such clothes quite extravagant for men, but the local residents have accustomed to Sulu long ago and even wear in at work. Those, who prefer the European standards, are free to wear pants, which are also considered a common and everyday clothing here. The local residents have already got accustomed to a large number of tourists and … Read more

Kadavu Island
The main hunters’ weapon was their voice. They lured tortoises to the coast with their songs and then clumsy and heavy animals were just unable to escape. It should be noted that this amazing hunting skill is improved by local women today. As it is forbidden to hunt rare animals, the locals just demonstrate everyone their unique skills and easily lure curious turtles to the coast. The first European ship boarded the coast in the second half of the 18th century. The first European … Read more

Viti Levu Island
Tips here are on the average 10-15% and they’re not obligatory. It’s about touristic areas; tips are a rather strange thing in the rest are of the island, especially in the places where native Fijians live. A thank for help out of job description would be really appropriate. You’re likely not to have any troubles with communication here. There’re two official languages on the island, almost everybody speaks English as well as Fijian. However, if you visit local villages, you’ll … Read more

Vanua Levu Island
The official language of the population is English, so you will not have any problems with communication. However, people in local remote villages have a special dialect. There are diverse religious preferences on the island – from pagan tribal cults to various forms of Christianity, Islam and Hinduism. Such a spread also indicates the ethnic difference of the population. Vanua Levu is home to almost a third of the country's population. Today, the people of Fiji are considered to be one of … Read more

Mamanuca Island
English is not quite traditional in spelling and pronunciation here. But you will be able to understand what you are told or what is indicated in the menu or on the sign. The population is very diverse ethnically. In addition to the natives, people from India, China, Indonesia, Japan, and Australia live here. English is the official language here. Therefore, tourists will not have problems with communication. In addition, the indigenous people use a variety of dialects. Diasporas communicate … Read more

Taveuni
The locals are quite friendly despite the reputation of brutal warriors and cannibals in the past. They actively greet tourists, shouting "Bula" - "Hello". The locals smile and talk a lot, and wave their hands. They will be happy to help you and even guide you to the right place. Families are traditional here. A man works to get money to support his family. A woman takes care of children and home. Small settlements live together. The chief leads the community. Respect and reverence for him … Read more