Sightseeing in Taveuni - what to see. Complete travel guide 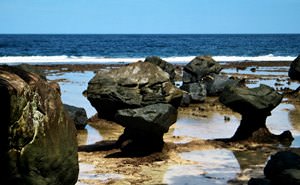 Taveuni is rightly considered one of the most picturesque islands in Fiji. Many travellers know it under the unofficial name Soft Coral Capital of the World. The main feature of the island is a unique nature, that attracts fans of ecotourism from all corners of the world. Amateurs of water sports like to relax here as well. Plenty of pleasant surprises are waiting for fans of snorkeling and diving. Walking through picturesque places, watching the representatives of local fauna, fun beach activities and exciting tours are just a few ways of organizing leisure for guests of the island. Connoisseurs of comfort will be pleased with the exotic island. Luxury resorts and a variety of leisure centers provide their services.
Your active city break in Taveuni. Attractions, recreation and entertainment - best places to spend your day and night here
Taveuni offers a variety of outdoor activities. First of all, these are water sports. There are especially many opportunities for diving here. It is worth noting the Somosomo Strait. There …

Open
The highest point of the island is Mount Uluikalau. Its height is 1241 meters. The ascent to the top of the mountain remains one of the favourite entertainments for active travellers. Its slopes are covered by incredibly beautiful rainforests. A huge number of pedestrian routes are laid through the territory of the foothill areas, each of which is incredibly interesting. Another unique symbol of the exotic island are the beautiful Bouma Falls.The height of the waterfalls ranges from 10 to 25 meters. From all sides, rapid water cascades are framed by dense thickets of tropical plants. Waterfalls look simply inimitable. A way towards them passes through incredibly beautiful places.
Lovers of scuba diving are attracted to the island by Somosomo Strait. It shares Taveuni with the nearby island of Vanua Levu. The bay is undoubtedly a very spectacular natural landmark, but its main value is hidden under water. Here, lies the Rainbow Reef, well known to diving fans. It is a unique natural attraction. One more unusual sight is hidden under the water - the Funeral Cave of the Warrior, which was discovered by scientists more than 50 years ago. According to one of the legends, in ancient times, the indigenous people buried dead soldiers in this cave, at a depth of 350 meters. In the middle of the 20th century, the cave was almost completely studied by European researchers. All artifacts have been removed from it and transferred to one of the historical centers. Copyright www.orangesmile.com
Advices to travellers: what you should know while being in Taveuni
1. The temperature is quite comfortable all year round here. It is 28-35°C depending on the season. If you go to Taveuni during the rainy season from December to April, keep in mind that …

Open
The most vivid monument of colonial times and the most famous architectural landmark of Taveuni is Wairiki Mission. The impressive building, made in the best traditions of the British style, is located on a small hill, with a beautiful panoramic view of the coast. One of the most visited objects on the island is an ancient village of Vuna, which was founded during the colonization of the island. Here, many ruins of ancient buildings are preserved, as well as an old farm, which still belongs to the descendants of the Tartu family, who've founded large-scale provincial plantations here. 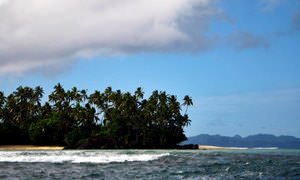 Nearby, is a crater of an extinct volcano, the eruption of which many thousands of years ago led to the emergence of the island. Lovers of excursions should definitely see the beautiful lake of Tagimus, exactly in the crater of the volcano. Exotic plants found suitable conditions in these amazing places. The whole surface of the lake is covered with rich vegetation of various shapes and sizes. Taveuni Island is sure to appeal to those who prefer active rest and prefer to spend their holidays every day in a new way.
Top hotels in Taveuni for business trip or short vacation
Discerning travellers will not have to look for a suitable place for a stroll for a long time. The choice of hotels on the Taveuni Island is more than worthy. The complex Coconut Grove …

Open
Nature fans simply cannot fail to visit Waiyevo. This is a beautiful place that is famous for its fabulous tropical forests. These forests have become home to many rare species of birds, so bird watching is a popular activity that tourists genuinely enjoy. During an excursion to this region, it is possible to see many rare species of predator birds, including rare Fiji falcons and peregrines. Some bird species in these forests are endemic. 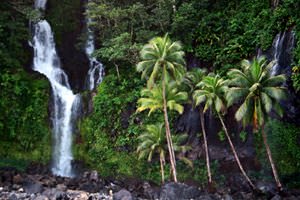 Active travelers will definitely not forget climbing Uluigalau Mount. This peak, the height of which is 1241 meter, is the highest spot of the island. Its slopes are covered with incredibly beautiful tropical forests. There are also several hiking trails of different complexity level. While walking to the top, vacationers will see rare plants, gorgeous butterflies, and tiny exotic birds. Bouma is one more region that is suitable for hiking. This part of the island is famous for its beautiful waterfalls. The height of some of them reaches 25 meters. Lake Tagimoucia also remains one of the main natural landmarks of the island. It is formed in the crater of a dead volcano, the eruption of which formed the island many centuries ago.

This guide to iconic landmarks and sights of Taveuni is protected by the copyright law. You can re-publish this content with mandatory attribution: direct and active hyperlink to www.orangesmile.com.
Taveuni - guide chapters 1 2 3 4 5 6 7

City tours, excursions and tickets in Taveuni and surroundings

Sightseeing in Fiji: things to see

Continue your acquaintance with the country by visiting Sigatoka. Make sure you visit Kalevu Cultural Centre, where you will be able to see an ancient mosque and enjoy its beautiful mosaic, take a walk on old streets full of historic mansions. Sigatoka Sand Dunes Park is a true gem of the city. The 650 hectare large park is an interesting place that attracts not only tourists but also archaeologists. Thanks to excavations an old necropolis that belongs to the 14th – 16th century was found in the park. … Open

Search touristic sites on the map of Taveuni

All about Taveuni, Fiji - sightseeings, attractions, touristic spots, architecture, history, culture and cuisine. Prepare your trip together with OrangeSmile.com - find out the 'must see' things in Taveuni, which places to visit, which excursions to take, where the breathtaking views are waiting for you. Planning your trip with this travel guide will help your to get the most out of Taveuni in few days.