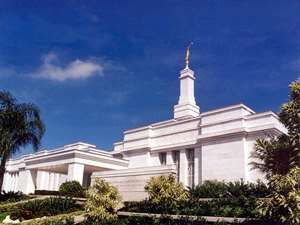 This wonderful country is mostly famous for its nature landmarks. Costa Rica is home to mysterious caves, big volcanoes, beautiful flower fields, dense forests and waterfalls. There are several active volcanoes in the country – Irazu, Arenal, Poas and Rinkon de la Vieja. All of them are located close to large settlements, so there are roads to these volcanoes and visitors are offered to attend excursions every day.
Unique sights of Costa Rica from our series 'Extreme places on Earth'
These spots really worth the attention of a real traveler-researcher. …
Read further
There are many uninhabited islands in Costa Rica, the most famous of which being Cocos, Negritos, Kanyo and Los Pajaros islands. These islands are considered national reserves, but travellers are permitted to arrive there to enjoy secluded beaches, walk in palm groves, and see exotic birds and animals. The islands are also perfect for fishing, underwater hunting and scuba diving.
Barra Honda Caverns are a true miracle of nature, so there’s no wonder why this place is so popular with tourists. The complex consists of 19 caves, with the biggest one being 240m deep. Walls and floors of the caves are decorated with beautiful minerals that make these caves look more like shiny treasuries. Copyright www.orangesmile.com
What to see and what to visit in Costa Rica with children
Tourists with children, who choose Costa Rica for a family holiday, will have the opportunity to visit a variety of amusement parks, nature reserves …
Read further
There are as many as 74 nature reserves in Costa Rica. Among them one can find tropical rainforests, mountain reserves and mangrove swamps. The most famous and frequently visited resorts are Tapanti, Guanacaste, Lomas de Barbudal, Palo Verde, Manuel Antonio, Barbilla and La Changreja. Some of these parks are located near the coastal line and some are in the mountains, so every tourist will easily pick up a park to fit one’s taste. 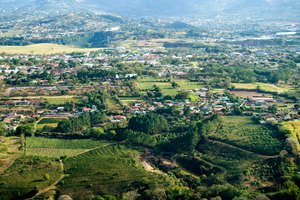 Those, who want to see precious archaeological findings, some of which are 2500 years old, are recommended to visit Turrialba Volcano, which region has always been used as a site of archaeological excavations. Continue your acquaintance with the country by visiting numerous museums of San Jose, the capital of the country. Various collections of jewellery, household items and historic artefacts, are exhibited at the National Museum. One of the museums – the Museum of Gold – is dedicated exclusively to items made of gold. The museum exhibits items that belong to the Indian era and later periods. The town of Limon, which is located near the capital, is a beautiful place that delights visitors with its beautiful beaches, reefs and tropical islands.
Unique sights of Costa Rica from our series 'Extreme places on Earth'
These spots really worth the attention of a real traveler-researcher. …
Read further

Little is known of the pre-colonial history of Costa Rica. Before Spaniards came to these lands, they had been populated by the Huetares tribes. In 1503, the team of Christopher Columbus boarded the territory of the present country. Then, they colonized the lands they had discovered but the process went quite slow. European settlers were very confused by severe climatic conditions and constant invasions of pirates destroying the settlements. 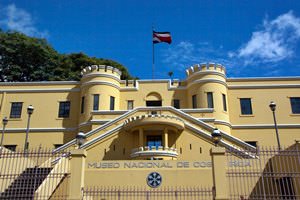 There were no gold deposits, as well as minerals, in the lands the Spaniards had conquered. Poor Spanish people mostly relocated to the new lands. Here, they formed plantations of corn, sugar cane, tobacco, cocoa, beans and other crops. Delivery of the first coffee trees was an important event for the colonial country. Their seedlings were delivered from Cuba in 1808. Later, the cultivation of coffee plantations was one of the main means of the local people’s subsistence. In 1821, Costa Rica gained independence from Great Britain and started developing as an independent country. In the first half of the 19th century, it had been a part of the Mexican Empire for a few years and became independent again after the Empire’s collapse in 1838.
What to see and what to visit in Costa Rica with children
Tourists with children, who choose Costa Rica for a family holiday, will have the opportunity to visit a variety of amusement parks, nature reserves …
Read further
Besides beach entertainments and strolls along exotic nature places, the guests of Costa Rica can enjoy many other entertainments. You will be also impressed with shops where you can buy exquisite coffee of the local production and craft items. As many years ago, there are many craft traditions in the country now. Here, people make interesting wooden items, weave bags and hammocks and make beautiful vases and ware of clay. The representatives of the gentle sex will be delighted with luxury hand-made accessories. Items of corals are very popular with tourists too. 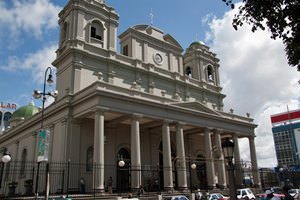 The national cuisine will definitely impress connoisseurs of seafood, as they can taste it at many restaurants. One of the most popular specialties for tourists is conchas shells and meat baked in banana leaves. Bananas are also an important component of the local cuisine and served not only in a fresh form. Bananas are baked, added to salads and different sauces, and cooked with rice.

This article about iconic landmarks and sights of Costa Rica is protected by the copyright law. You can re-use the content, but only under the condition of placement of an active link to www.orangesmile.com.
Costa Rica guide chapters 1 2 3

National and city parks of Costa Rica
♥   National Park 'Arenal' . On the map

Famous and uniques places in Costa Rica from our review series 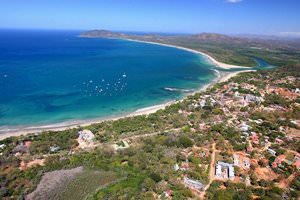 The charming beach of Playa Grande is covered with soft white sand. It is known as one of the best sections of the coast for surfing in the country. Not everyone knows that it is also an important natural attraction. Rare species of sea turtles have chosen this beach as a nesting site. The beach is located on the territory of the marine reserve of Marino Las Baulas today. The turtle population has declined dramatically in recent years. The Marine Reserve is actively involved in various environmental programs today. They are aimed at increasing the turtle population.

Nevertheless, Playa Grande continues to be a stretch of coast accessible for recreation. There is no better part of the coast for surfing in the province of Guanacaste. This section of the coast is aimed at novice surfers … Read all

Precolumbian Chiefdom Settlements with Stone Spheres of the Diquis 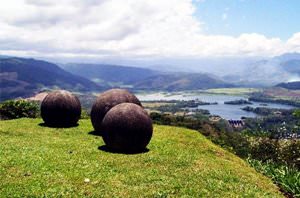 Costa Rica is also ready to surprise travelers with unusual sights. One of the major mysteries of the country are stone spheres. In total, there are about 300 of them. They can be seen at Kiko peninsula and on Cano Island. The mysterious balls of limestone, sandstone or gabbro vary in size. Some of them are only about an inch in diameter, while others reach two meters in section and weigh over 15 tonnes.

The unique attraction was discovered relatively recently, in the 30s of the last century. These items drew attention of the workers who were hired for clearing the land for setting banana plantations. Ten years later, the famous archeologist Lothrop was engaged in the study of stone spheres. Later, they attracted attention of other scientists from around the world. The purpose and a way … Read all 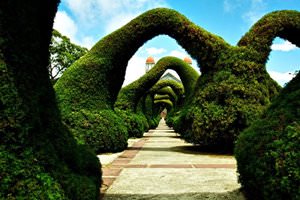 The major attraction of Costa Rica is Parque Francisco Alvarado that can be called a real masterpiece of the landscape design. In this park, visitors will have an opportunity to see incredibly beautiful and amazing mazes of living plants, as well as living sculptures covered with moss. They represent the most unusual decoration of the park. Some sculptures are partly made of stone and complemented with plants. A special moss that allows creating a simulation of living sculptures is cultivated on the rocks.

The original park is located in the small town of Zarcero. The place had gained its name in honor of the famous writer Francisco Alvarado. The garden has a rather large scale and a variety of complex sculptures. It’s hard to imagine that over the years the garden is looked after by … Read all
All unique sightseeing Costa Rica

Escazu
Among the natural attractions, it is definitely worth highlighting the Island of Coconut, a trip to which will also give a lot of impressions. This is the largest uninhabited island on the Pacific Ocean. Its area is about 24 square kilometers. The whole territory of the island is covered with lush tropical vegetation. The highest point of the island is Mount Raundel-Kon. Getting to this island is not easy, but the most patient and motivated tourists will be able to see this amazing natural … Read more

San Jose
The most interesting cultural object is the Museum of Numismatics and Pre-Columbian Gold. In fact, it represents two unique museums located in the same building. Its main values are items made of precious metals related to pre-Columbian times. During the colonial era, many valuables taken from the indigenous populations were melted down into gold bars. However, some of them survived. Nowadays, golden statues of the gods, jewellery and ritual things, that previously belonged to the indigenous … Read more