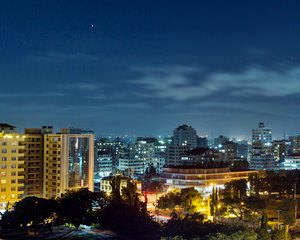 Dar es Salaam is one of the biggest cities in Tanzania. This is an important city on the Indian Ocean’s coast. Moreover, Dar es Salaam is a major port in Tanzania. Many tourists from other countries start their adventures in Tanzania exactly from this settlement. However, Dar es Salaam deserves more attention because the city has so much to offer. Beautiful beaches, marvelous and attractive architecture, and massive opportunities for active recreation make this city a destination that is worth exploring. Dar es Salaam is suitable not only for adult travelers and fans of extreme but also for families with small children.
There was a village named Mzizima on the site of modern Dar es Salaam in the 19th century. Local people mostly did fishing for a living. The first European arrived in the region in 1859. This was Albert Roscher from Hamburg. Three years later, Sultan Sayyid Majid bin Said decided to build a city on the coast of the Indian Ocean. The sultan gave the new city that name that we all know today - Dar es Salaam. When Sayyid Majid bin Said died, the process of building the city slowed down. Only in 1889, when Germans occupied the city, the first dock appeared in Dar es Salaam. The British became rulers in the region in 1916.
After the end of World War II, Dar es Salaam started developing actively. In winter 1961, Tanganyika finally became independent, and Dar es Salaam became its capital. When Tanganyika and the People’s Republic of Zanzibar merged to form a new country, Tanzania, it was decided to make another city the new capital. The process of changing the capital hasn’t finished yet. The national university opened in the city in the 70s of the 20th century. This led to the formation of a whole university town in Dar es Salaam. Copyright www.orangesmile.com
Are you planning to visit Dar es Salaam to sunbathe and enjoy beach recreation at the coast of the Indian Ocean? For this purpose, consider visiting a beach in Kigamboni, a southeastern district in the city. This is a calm and peaceful place that is possible to reach by car or by ferry. It is important to mention that, except for beaches near hotels and resort complexes, almost all public beaches in Dar es Salaam are somewhat abandoned. They don’t have a well-developed infrastructure, and some vacationers might think that they lack comfort. That is why, if the beachside infrastructure is crucial for you, it is better to choose a beach near your hotel. These beaches offer gear for rent. 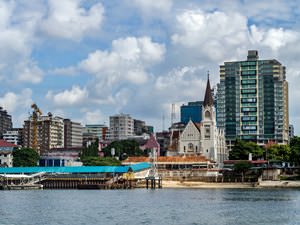 Nature in Dar es Salaam is suitable for active recreation. You can ride waves if you know how to surf. The area is also perfectly suitable for diving, so this is a wonderful opportunity to see the local underwater world. Many tourists enjoy making canoe excursions or simply take a stroll along the waterfront that offers striking views of the endless ocean surface.
Many tourists may wonder how they can enter beaches of hotels if they don’t stay at these hotels. It is not hard to do – simply buy a drink or some food, and you are allowed to enter. Moreover, you won’t need to worry about beach gear. Beaches near hotels already come with everything necessary. They have a soft sand surface, and the water is shallow near the coast, making local beaches suitable for both adults and children. 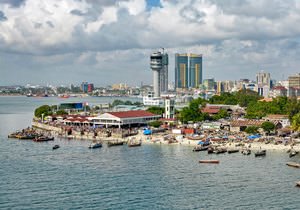 Tourists may also find it interesting to visit Bongoyo Island that is located not far from Dar es Salaam. The island is still uninhabited. It attracts a big number of tourists, but locals also enjoy visiting this place to relax and enjoy the peaceful atmosphere of this place. There are two beaches, one of which is more popular and that is why there are many small restaurants near this beach. The coastal waters are so clean that there is no need to use any special equipment to see the bottom and underwater life. The beach is covered with soft white sand that looks like snow.
The other beach is quite narrow. This is an incredibly beautiful area but it is not very comfortable for beach recreation. There are beautiful forests on the island, and some of them are so dense that it is better not to explore them alone. Sharp rocks block the way from time to time, encouraging tourists to return back. Consider heading to the northern part of the island and relaxing in the naturally formed lagoon that stretches along the coast. There are mango trees in this part of the island, so you can see how this popular fruit grows. 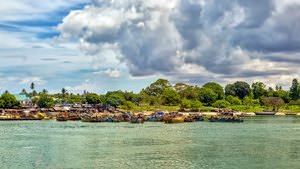 If you choose to travel by air, you need to know that Dar es Salaam has its own airport that has two terminals. One of these terminals was finished not long ago. It accommodates flights from European, Asian, and African countries. The old terminal is for domestic flights, so only airplanes from such cities of Tanzania as Arusha and Zanzibar land there. It is possible to get to Dar es Salaam by train only from the capital of Zambia, Lusaka.
This guide to iconic landmarks and sights of Dar es Salaam is protected by the copyright law. You can re-publish this content with mandatory attribution: direct and active hyperlink to www.orangesmile.com.

National and city parks around Dar es Salaam
♥   National Park 'Saadani National Park' , 101.2 km from the center. On the map 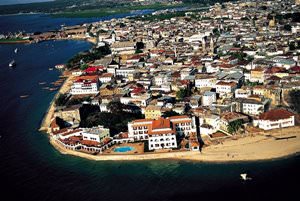 Distance from Dar es Salaam center - 69.8 km.
Among the historical sights one must mention the Palace of Beit al Ajaib, also known under the unofficial name 'House of Miracles'. Once this ceremonial palace was used for the most solemn events. It managed to retain some of the original decoration. The ancient Arab fort, built in the 18th century, is also worth seeing. In total, there are more than 1700 old buildings on the territory of the Stone Town of Zanzibar, most of which, unfortunately, are under the threat of complete destruction. … Read further

Sightseeing in Tanzania: things to see

Search touristic sites on the map of Dar es Salaam

Zanzibar Island
Zanzibar is the picturesque archipelago, the main treasure of which is unique nature and fabulously beautiful beaches. The archipelago includes the island of the same name, which has long attracted attention of curious travelers. Stone Town rich in historical monuments is situated on Zanzibar Island. Several years ago, this unique place attracted only fans of ecotourism. Today ... Open »
Nairobi
Would to you like try something thrilling? In Nairobi, tourists can visit an interesting park with all kinds of snakes and reptiles. The first visitors saw a live collection of this park in 1961. The main purpose of this venue was to tell local people and tourists about the snakes and reptiles that are indigenous to Africa. The collection includes many venomous species. ... Open »
Antananarivo
The most colorful and attractive city of Madagascar, Antananarivu is located on two picturesque hills. Here you will find multiple cozy parks and terraces, fairytale-like castles and museums that make the city attractive and unforgettable in the eyes of travelers, who are ready to visit Antananarivu again and again, enjoying the splendor of ancient buildings and marvelous ... Open »
Addis Ababa
The city is a large industrial and economic center of Ethiopia, which is also known as a famous resort rich in historic sights. The cultural program offered to guests of Addis Ababa is diversified and can fit any taste. In this city there are several museums, from which the Museum of Arts and the Ethnographic Museum are surely worth visiting, the National Theatre, multiple ... Open »
Victoria
The most popular and most visited beach is Beau Vallon. Life here doesn’t stop neither on the daytime nor night. When night comes to the island, here are opened numerous discos and bars. On daytime visitors are welcome in numerous restaurants and sports facilities. Not far away from the beach you will find internet cafes and numerous shops. If you seek tranquility, the ... Open »
Mahe Island
One of the most visited cultural institutions of the capital is Michael Adams Studio devoted to the local artist whose work is known far beyond the archipelago. The gallery occupies a classic chalet, which in addition to the workshop is equipped with a small shop. Everyone can buy pictures he like and other interesting souvenirs, branded calendars and postcards there. The Sir ... Open »

All about Dar es Salaam, Tanzania - sightseeings, attractions, touristic spots, architecture, history, culture and cuisine. Prepare your trip together with OrangeSmile.com - find out the 'must see' things in Dar es Salaam, which places to visit, which excursions to take, where the breathtaking views are waiting for you. Planning your trip with this travel guide will help your to get the most out of Dar es Salaam in few days.