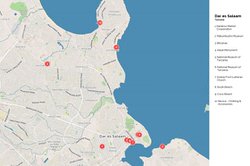 1. You can zoom in/out using your mouse wheel, as well as move the map of Dar es Salaam with your mouse.
2. This interactive map presents two modes: 'Biking Routes' and 'Hiking Routes'. Use the '+' button on the map to switch between them.

This Dar es Salaam map has two modes: 'Railway Network' and 'Landscape & Rural Map'. Use the '+' button on the map to navigate.

Tanzania - moving around the country

There are about fifty airports in Tanzania, but only few of them serve for international communication. The largest air harbor in Tanzania is Julius Nyerere airport. It is located on the outskirts of the city of Dar es Salaam. You can get to the city by pre-ordered transfer, by taxi or by local public transport. It is worth noting that Julius Nyerere is considered to be the largest in East Africa. The airport of Kilimanjaro is next in the rating for servicing international flights. It is located in the north-east of Tanzania. The peculiarity of this air harbor is a rather large runway, the length of which is about 3.6 km. At the moment, the terminal of this airport is rebuilt to increase the capacity. … Open

Nature and parks of Tanzania

Tanzania can boast with the highest peak in Africa. That’s Kilimanjaro, which is the potentially active volcano. In Swahili, its name means 'a mountain that sparkles.' The peak rises above the African plains, and the snow covering it shines in the hot sun. According to legends, local soldiers took snow on top of the mountain for silver and even tried to mine it during ancient times. Today, the eternal glaciers on Kilimanjaro are rapidly melting. The mountain is surrounded by the national park, which was included in the UNESCO World Heritage List. There are mountain forests, where you can meet many wild animals, including lions, zebras, giraffes, baboons, and antelopes. National parks of Mikumi, Mkomazi, Katavi, and Arusha can be visited in Tanzania too. … Open

Our guide to Dar es Salaam

After the end of World War II, Dar es Salaam started developing actively. In winter 1961, Tanganyika finally became independent, and Dar es Salaam became its capital. When Tanganyika and the People’s Republic of Zanzibar merged to form a new country, Tanzania, it was decided to make another city the new capital. The process of changing the capital hasn’t finished yet. The national university opened in … Open

Maps of Zanzibar Island
You can go for a ride on a board with a paddle – sub-surfing. It will be interesting to go to the mangroves and swim among the unusual aerial roots. This type of entertainment does not require special skills. You will be able to master it quite quickly. You should go scuba diving or snorkel to admire the underwater beauty of Zanzibar. There are picturesque coral reefs ... Open »
Maps of Antananarivo
Tourists, who want to get acquainted with the culture of the city, are recommended to visit Antananarivo markets. For locals, markets are more than just places to buy and sell. They come there to meet and socialize. For tourists, such markets as Ambalavao, Tana, and of Ambositra are a wonderful opportunity to explore the national culture. The Ambositra market is open every ... Open »
Maps of Addis Ababa
Addis Ababa is a typical colonial city with rich architecture and preserved historical buildings, that is why it's not so easy to find interesting entertainments for children. Nevertheless, you can organize an interesting family entertainment here. In Addis Ababa, there is a wonderful Lion Zoo, the main inhabitants of which are lions. In addition to lions in this zoo, you can ... Open »
Maps of Victoria
It is also worth mentioning a great club for gamblers - Gran Kaz Entertainment Center where you can play slot machines for every taste. Besides, the center houses a nice cafe where you can share the impressions you have received in the Seychelles capital with friends or family members. Deepam Cinema is another great place to go if you've long been waiting for some of the ... Open »
Maps of Mahe Island
You can also swim in a magnificent waterfall near Glaud Port. Then, not far from a bus stop, right behind the Catholic church, find a trail that will take you inside the Morne Seychellois National Park. Be careful while swimming in the waterfall – locals really like climb trees and that jump into the waterfall from the top with various tricks, and they don’t always take a ... Open »
Maps of Djibouti City
Khor Ambado Beach - a beautiful beach, one of the best in the region - offers a lot of entertainment. Its visitors can sunbathe under the scorching sun of Africa, swim, and rent equipment for water activities. In addition, here is a wonderful restaurant where really tasty food is served. Seafood and fish dishes deserve the highest praise. It is not too crowded but not empty - ... Open »
OrangeSmile.com - online travel reservation expert providing reliable car rental and hotel booking services. We feature more than 25.000 destinations with 12.000 rental offices and 200.000 hotels worldwide.
Secure Server