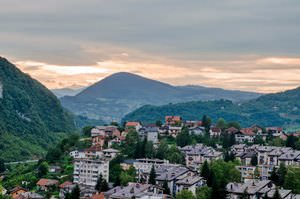 Bosnians are very serious about preserving wildlife, so there are many parks and protected areas in Bosnia and Herzegovina. The Bijambare Nature Park was recognized as a protected area in 2003. Bijambare has many walking paths, a wooden children's playground, bicycle, and pedestrian forest paths. And from the entrance of the park, you can ride a small train. Also, besides the fascinating nature, there are eight caves where tools and weapons of the Stone Age were found. Today these valuable artifacts are kept in the National Museum of Bosnia and Herzegovina in Sarajevo. Only one of the eight caves reaching half a kilometer in length is presently open. Inside it, there are four small caves in which tourists can walk freely. The fourth "section" is especially interesting for its outstanding acoustic characteristics, for which it was nicknamed "The Chamber Hall". Entrance for children under 7 years old is free, the rest will pay 2 KM.
National traditions and mentality of people in Bosnia & Herzegovina
Bosnians are friendly and hospitable people. They easily start conversations in public transport, offer their help to confused tourists. Bosnians' …
Read further
The Una National Park in Bihac is famous for its tuff deposits with cascades. The most famous of them are Martin Brod, Strbachki Bok, and Troslap. It was found that the age of the youngest tuff formations near Una is about 3000 years. This phenomenon is the result of prolonged processes of deposition of tuff - a porous rock. The largest and most beautiful waterfall on the river Una consists of three tunnels with a length of 24 meters. This area is inhabited by various species of plants and animals. Unu is decorated with ancient cultural monuments in the form of towers and fortresses. The park is aimed at preserving the unique ecosystems of Upper Una and promoting ecotourism.
Spacious Slana Banja Park in Tuzla is located very close to the city center. It is good for walking, jogging, admiring lakes and gardens while sitting on one of the comfortable benches. Here you can enjoy beautiful views of the city that is clearly visible from the highest point of the park. The park's alley is well-groomed, there is also a playground, a tennis court, and war monuments. Copyright www.orangesmile.com
Bosnia & Herzegovina cultural sights. What to see?
History buffs will be surely be amazed by Zemalskij Museum. It is a national museum in Sarajevo where you can see millions of interesting exhibits. …
Read further
Artificial Jablanica Lake in Mostar is famous for its crystal-clear waters, breathtaking views of mountain ranges, and a historical monument - a bridge that was blown up by guerrillas during the Second World War. Next to the bridge is the Museum of War, on the east side, there is a German bunker converted into a restaurant. The reservoir has a half-century history. Along the entire lake, there are countless guesthouses, hotels, as well as camping sites. The lake is full of trout, perch, and carp. 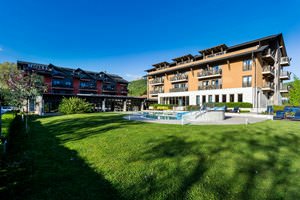 In Zaplina, the southeast of Bosnia and Herzegovina, on the left bank of the Neretva River, there is the wonderful Hutovo Blato Nature Reserve. It is a good place for admiring the virgin nature. For 50 Euros, you can ride a canoe or a kayak, and even see lots of wild animals. Founded in 1995, the park is located in the municipality of Čapljina, stretching over an area of 7411 hectares.
Things to do in Bosnia & Herzegovina - active leisure
Cities in Bosnia and Herzegovina have everything you need for intense nightlife. For example, little cozy metropolitan bar Zlatna Ribica ("Goldfish") …
Read further
Amazing Kozara National Park in the northwest of Bosnia and Herzegovina is home to deer, fox, wild boar, hare, wild rabbits, squirrels, wild cats and badgers, mink, marten and weasel. Birds inhabiting the park include pheasants, ducks, falcons, sparrowhawks, owls, pigeons, sparrows, magpies, woodpeckers, and nightingales. The park declared national in 1967 is fascinating with dense forests, clean air, colorful flowers, the smell of pine needles, and mighty mountains. Mount Kozara is of great natural, cultural, and historical value. In winter, tourists go skiing and mountaineering, in summer - walking and cycling. Surrounded by rivers, the park also has rivers and hot springs within its territory. 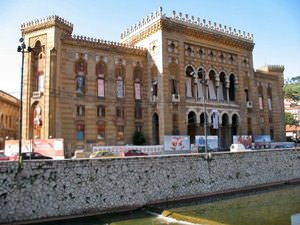 Large City Park Mladen Stojanovic is a green oasis in the middle of Banja Luka. Although the park is very popular among citizens and travelers, here you can always find a free bench. Children will like playgrounds with slides and trampolines, bike trailers can be hired for the smallest visitors. Convenient walking and jogging paths, a tennis court, a restaurant and a couple of cafes, a huge chess board with 1-meter-high figures - all these attract an infinite number of people to this park. In September, a tennis tournament is held in the park.

This article about nature and national parks of Bosnia & Herzegovina is protected by the copyright law. You can re-use the content, but only under the condition of placement of an active link to www.orangesmile.com.
Bosnia & Herzegovina guide chapters 1 2 3 4 5 6 7 8 9 10 11 12

National and city parks of Bosnia & Herzegovina
♥   National Park 'Kozara' . On the map

Sarajevo
True explorers and investigators will love to see a building of the Old Town Hall being a genuine example of the Moresque Style. Many excursion routes start from the Bascarcija Square. Close to the square tourists will discover the largest market place of the city having the same name. The market will be of great interest not only for genuine shopping addicts. On the premises of the market tourist will find numerous art and crafts workshops being established there many centuries ago. The … Read more

Banja Luka
Vacationers should also not forget to stroll on beautiful Krajina Square, which has a high concentration of various cafes, restaurants, and shops. The main park of Banja Luka borders with the square. It is also a fantastic place for a leisure walk. However, thermal springs still remain the biggest attraction and symbol of the city. Thanks to their healing properties, Banja Luka turned into a large balneology resort from an ordinary industrial town. The city’s outskirts are full of unique … Read more