Sightseeing in Mostar - what to see. Complete travel guide 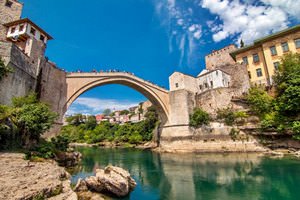 Along the Neretva River in southern Bosnia and Herzegovina lies an interesting city called Mostar. Everyone who has visited this country at least once says that Mostar is definitely a city that is worth visiting. The territory of the settlement is conventionally divided into two parts as the river crosses the city. A bridge, which gave the name to Mostar, connects these two parts. This is an exceptionally attractive city that is always glad to welcome new guests and is ready to reveal its historical attractions. Besides that, this region has an incredibly picturesque nature that is like a magnet for everyone who likes not only sightseeing but also outdoor recreation. Mostar suburbs are fantastic and definitely worth visiting.
In the early Middle Ages, the territory of modern Mostar was a part of the Zahum province. Over the centuries, the territory changed owners several times. In different years, the Nemanjić dynasty, Bosnians, and Zahum princes reigned here. In the mid-15th century, two towers appeared on the different banks of the Neretva River. The fortification on the right bank became famous as Cim, and Nebojsa was the name of the fortification on the opposite bank. This is when the town of Mostar appeared. At the beginning of the 16th century, Mostar became the center of the Sanjak of Herzegovina.
Initially, a wooden bridge connected the two banks of the town. A new, stone bridge was built in Mostar in 1666. The settlement started developing even more actively after that. Mostar was getting bigger, and its population was increasing. In the 20th century, Mostar had to endure a tough period. The Yugoslav People's Army conducted an eighteen-month-long siege of Mostar soon after the proclamation of the independence of Bosnia and Herzegovina. Many buildings in the city were damaged or completely destroyed because of the bombing. The Bosnian military conflict, which lasted three years, had a devastating effect on the architectural heritage of Mostar. Copyright www.orangesmile.com
The Karagöz Bey Mosque is one of the major shrines in the city. It was built in the middle of the 16th century. One of the most famous architects in Turkey at that time – Mimar Sinan – was the builder of the sacred place. The mosque has a large dome and tall minaret that make it the biggest in the region. This is an eye-catching building that is hard not to notice. During World War II, the shrine, just like the rest of the city, was damaged severely. The war in the 90s of the 20th century also left a trace on the look of Mostar. A thorough reconstruction started at the beginning of the second millennia. It restored the gorgeous look of the mosque. 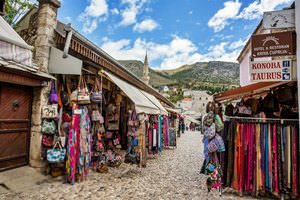 The grand reopening of the Karagöz Bey Mosque took place in 2004. Nowadays, both locals and guests of the city are free to visit the sacred building. Visitors can also explore the territory that surrounds the shrine. Builders have carefully kept all unique traits of the mosque including its tall minaret, the height of which is roughly thirty-six meters. The minaret makes the mosque stand out from other sacred places in the city. All visitors can get to the top of the building and enjoy an unforgettable and picturesque view of the surroundings. This is a great place to take pictures as Mostar lies at your feet.
In recent years, Tito’s Palace has become a popular tourist attraction. This is a large building in Mostar that once was the residence of Jossip Broz Tito, the former leader of Yugoslavia. The residence was almost completely destroyed during World War II, turning the attractive estate into historical ruins. The city’s authorities decided not to restore the building. 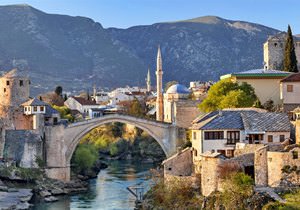 Nowadays, Tito’s Palace is still in ruins. Nevertheless, it has cultural value for the country even in such a drastic condition. Despite the poor state, the former residence has always attracted numerous tourists from different countries. Even nowadays, multiple guests of Mostar enjoy taking a stroll along the once beautiful palace.
Would you like to see the most impressive landmark in Mostar? Take a look at the Turkish bath built in the 14th century. Initially, the building was intended for residents of Mostar and traveling merchants. Despite a global reconstruction in 2010, the bath has retained its original look and numerous original details. The building is a fine example of the Egyptian Mauritian style. Its décor is mostly made in pink, gray, and yellow shades. The central entrance with a carved door and elegant columns is the most eye-catching element of the building. 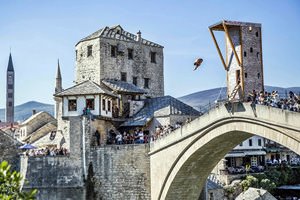 The most comfortable way to reach Mostar is to travel from other cities of Bosnia and Herzegovina. There are several daily buses and trains that go to the historical center of the city. The main route starts in Sarajevo. It takes roughly two hours by bus to get to Mostar from the capital. Additionally, trains connect these two cities. The time in transit is the same.
This guide to iconic landmarks and sights of Mostar is protected by the copyright law. You can re-publish this content with mandatory attribution: direct and active hyperlink to www.orangesmile.com.

City tours, excursions and tickets in Mostar and surroundings

Survived castles around Mostar
♥   Castle 'Blagaj' Mostar, 11.5 km from the center. On the map

National and city parks around Mostar
♥   Nature Park 'Biokovo' , 61.4 km from the center. On the map

Sights around Mostar from our guide 'Extreme places on Earth' 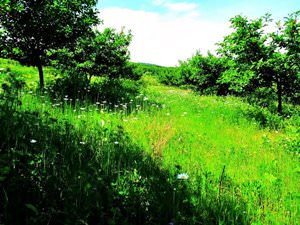 Distance from Mostar center - 44.3 km.
As many hundreds of years ago, indigenous people sew clothes by themselves. Locals wear beautiful national costumes and conduct a number of amazing national rituals. Travelers who want to visit this special village, which is lost in the mountains, have to consider that they can reach it by foot only. Guided tours for tourists are held only during warmer months. With the onset of winter cold it becomes very dangerous to go mountain hiking. … Read further

Search touristic sites on the map of Mostar

Sightseeing in regions nearby Mostar

Pocitelj
The Gavrankapetan’s Tower dominates the town’s skyline. This is one of the major attractions of the fortress town. The tower was built by the order of King Stephen Tvrtko I of the House of Kotromanić at the end of the 14th century. The main purpose of the tower was to protect the main road leading from the river to the sea. The tower is built on an almost vertical rock. ... Open »
Makarska
The embankment is the location of numerous hotels, restaurants, cafes, bars and other facilities that traditionally attract tourists and locals by their unique originality and beauty of Dalmatian landscapes. Kacic Miosic’s Square is the heart of the town and the location of St. Mark Church. The church is surrounded by Old Town, which is an ancient region of Makarska famous ... Open »
Elaphiti Islands
The most picturesque island of the archipelago is Lopud; in the last century, it began to attract attention of the aristocratic families. Here, along the waterfront, they built their luxurious villas, which have managed to survive to the present day; today these mansions are priceless architectural monuments. In addition to elegant mansions and a relaxing stroll along the ... Open »
Sarajevo
Sarajevo is decorated with small city trams that seem to run away from time. Endless small cafes and cozy restaurants can be easily found on the main trade area of the city named Bascarsija. Besides them you will find here many jewelry stores, souvenir shops and small pastries. In addition to this there are two famous squares in the city. These are Gazi Husrev-beg, which is ... Open »
Dubrovnik
Founded in the 7th century, nowadays the city has the population of 50 000 people. Dubrovnik can be surely called one of the most fascinating cities of Croatia. Due to its ancient centre Dubrovnik has been included in the UNESCO list of World Heritage Sites. In the Middle Ages Dubrovnik was one of the most famous economic and cultural centres of the whole Mediterranean region. ... Open »
Korcula Island
The Prince's Palace has perfectly preserved to this day; that’s a fine example of 14th century architecture. This is one of the few buildings that hasn’t changed appearance and didn’t undergo any major renovation. Franciscan Monastery is among other noteworthy historical sites. It was also founded in the 14th century; a lot of amazing stories and legends are associated ... Open »

All about Mostar, Bosnia and Herzegovina - sightseeings, attractions, touristic spots, architecture, history, culture and cuisine. Prepare your trip together with OrangeSmile.com - find out the 'must see' things in Mostar, which places to visit, which excursions to take, where the breathtaking views are waiting for you. Planning your trip with this travel guide will help your to get the most out of Mostar in few days.