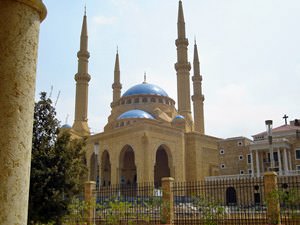 Beirut is a true paradise for fans of exciting excursions and walks on picturesque locations. It has everything you need for interesting and diverse holiday - ancient monuments and museums, beautiful squares with historical attractions and amazing mosques, colorful markets and cozy parks. Square of martyrs and the memorial dedicated to the defenders of the city, which is located on this square, is one of the major excursion destinations. It was built in the 30s of the previous and reminds of the tragic events connected with the attacks of Turkish invaders. Star Square is an interesting place that is located in the heart of the historic district of Beirut. During the reign of the Roman Empire the square was the location of a great forum. Nowadays, Al Najma Square (the local name) is the beginning of the most beautiful streets of the city.
Best hotel choice for romantic escape, wedding or honeymoon in Beirut
An upscale hotel Lancaster Plaza Beirut offers an opportunity to arrange an unforgettable romantic vacation. The lodge is situated in the heart of the city; the former offers a good choice …

Open
The largest part of the historic buildings located on the square were also severely damaged during the war. However, thanks to the efforts of the local architects the buildings were completely restored. The center of the square is the location of a beautiful tower with a clock. This is the favorite place of appointments among couples. Mosque of Omar is probably the most famous religious monument of Beirut. The mosque is also one of the oldest buildings of the city. Previously a Roman temple dedicated to Jupiter was located on the site of the mosque. Later the Crusaders built a beautiful church on its place, and in the beginning of the 13th century the church was rebuilt into a mosque. There is a colorful market near the mosque, as well as several historic streets, a walk in which will also bring a lot of fun.
Sursock museum occupies the building of a beautiful old mansion. This is a private museum founded by a Libyan scientist Nicolas Ibrahim Sursock. The museum was opened in 1912, but it became available for free attendance only in 1961. The spacious rooms of the museum store approximately five thousand works of art. It should be noted that the design of the museum itself deserves highest praise. Each piece of furniture here is a true masterpiece. An excursion to the National Museum of Beirut will be no less interesting. Among the exhibits of the museum are many unique artifacts of the prehistoric times, collections of pottery, ancient jewelry and other precious collections. Even nowadays archaeologists keep working in the suburbs of Beirut, so the collection of the National Museum is constantly growing. Copyright www.orangesmile.com
Shopping in Beirut - main shopping streets, outlets and boutiques
Shopping in Beirut is a dream for thousands of tourists. The choice of places to shop is just huge. The most famous shopping center is Beirut Mall, which offers customers a wide range of …

Open
There are quite a few interesting religious monuments in Beirut, be it mosques, Christian cathedrals or synagogues. Take for example, the Mohammed Al-Amin Mosque, an excellent example of architecture. It was built with the money of the parishioners, which they collected for 50 years. The mosque is famous for its unsurpassed interior decoration, so you should definitely appreciate it. Another stunning mosque is the Al-Omari Grand Mosque, the most ancient temple in Beirut. This shrine was built on the site of a Roman temple, and in 1291, the mosque acquired a modern look. There is the Saint George Greek Orthodox Cathedral in the city. It is notable for its interior decoration, as well as the fact that you can find an interesting museum that introduces you to the history of the city, under the church. 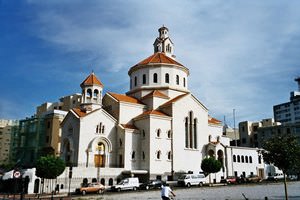 The American University of Beirut is called a true “oasis in a desert” for the fact that an excellent garden is located on the building’s grounds. A certain peace reigns here. This is one of the places where you can relax away from the noisy city. Also situated here is the Archaeological Museum, which you can visit for free. Also in the city was left the ruins of the Roman baths. It is worth mentioning that they are well preserved. They were found in 1991, and before this time there was a highway here. You can visit them at absolutely no cost.
Guide to Beirut sightseeing - things to see and to visit
Beirut is a city with rich historical heritage. When you visit all main sights of it, you will learn whole history of the country, because Beirut is rich in sights of different epochs. …

Open
An excellent walk can be made along the Zaitunay Bay. Great view of the skyscrapers, arriving and departing yachts, water surface, many restaurants and cafes open up here. The embankment looks especially romantic is in the evening, when the city is beautifully illuminated. Interesting natural attractions are the rocks in Raouche – the real landmark of the city, along with the most famous native of the city – namely, Keanu Reeves. It is best to come here in the morning to catch the dawn. Another very pleasant amusement will be a horse ride along the coast. 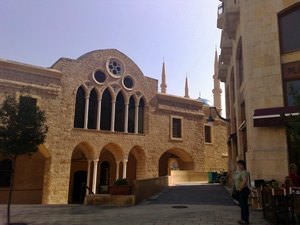 Beirut is famous for the extraction of minerals, and therefore it is not surprising that the city has a museum dedicated specifically to this activity. Here you can see more than 1800 samples from around the world. A must-see is the Robert Mouawad Private Museum. The most important asset of the museum is the Excelsior gem (diamond weighing 69.68 carats). You can get acquainted with another traditional craft of the city by visiting the Silk Museum. Here you will learn about the Great Silk Road. The remarkable thing is that you can also sit here in a relaxed atmosphere, enjoying the silence.

In the section below, you can get one of our excursion, activities or city discovery tours over Beirut and surroundings. Our website offers 10-30% lower ticket prices, when compared to the offline purchase on the spot.

This guide to cultural sights Beirut is protected by the copyright law. You can re-publish this content with mandatory attribution: direct and active hyperlink to www.orangesmile.com.
Beirut - guide chapters 1 2 3 4 5 6 7 8 9 10 11 12 13
Reference information
Map of all palaces

Public palaces near Beirut
♥   Palace 'Sursock Palace' , 2.5 km from the center. On the map

Art galleries in Beirut and around
♥   Art museum 'Sursock Museum' Beirut, 2.5 km from the center. On the map

Cathedrals and basilicas near Beirut
♥   Cathédrale Saint-Georges, Tripoli, 2.8 km from the center. On the map

♥   Cathédrale Saint-Louis, Beirut, 3 km from the center. On the map

♥   Cathedral of St. Raphael, Beirut, 4 km from the center. On the map

♥   Sanctuaire Notre-Dame-du-Liban, Harissa, 18 km from the center. On the map

Photogallery of cultural heritage of Beirut

Excursions over cultural sights of neighbours of Beirut

Damascus
Magharat ad Dab is an important natural attraction. There are also many mysterious beliefs connected with this place. It is believed that it was in this cave where Cain took the life of Abel. In Damascus you will find a wide number of museums, each of which exhibits a unique collection of ancient artifacts and art objects. National Museum is a very interesting place the basis ... Open »
Acre
Citadel of Acre, which was built in the mid-18th century, is considered the main historic symbol of the city. This is a large architectural complex surrounded by impenetrable stone walls. Archaeological studies discovered that the first constructions on the site of the citadel were built by the Templars. The citadel that we can see today was built on the ruins. The underground ... Open »
Haifa
Its permanent symbol is Technion, the awesome Institute of Technology opened in 1912. There is also the Haifa Museum of Art, which collection includes more than 7,000 exhibits in the district. It is situated in the important historic building of the early 20th century. Fans of theater would be interested in visiting the local theater and hikers would enjoy the Gan Hapsalim ... Open »
Nazareth
The main attractions of Nazareth are religious shrines, among which a special place is occupied by the Basilica of the Annunciation. According to legend, the basilica was built in the very place where Mary received the message from God. It features an unusual architecture and has been the largest Christian church in the Middle East since its construction. This basilica has two ... Open »
Famagusta
The Othello's Tower built in the 14th century to protect the rapidly developing city has perfectly preserved to this day. After Venetians arrival fortifications were significantly extended and city has served as an artillery base for some time. Many marvelous legends are associated with the fortress; they explain the direct association with the famous Shakespearean character. ... Open »
Larnaca
Several ancient mosques have preserved in the city; Al Kebir is the most beautiful among them. Built in 1835, it has never been subjected to major renovation; formerly an old church was located on the site of the mosque. In the immediate vicinity of the city is an important archaeological area, where excavations are held until these days. Here, archaeologists have discovered ... Open »

Culture guide to Beirut. Which fascinating sights to visit once you are in Beirut: temples, churches, museums, theaters and castles. Recommendations (with addresses, phone numbers and links) on the places 'must visit' in Beirut. Plan your own city excursion by using this page info!