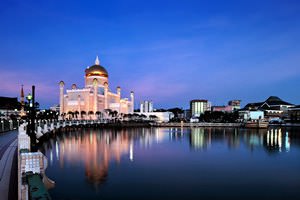 Bandar Seri Begawan is the capital of Brunei. The city is conveniently built on the left side of the Brunei River. The city is situated in a small valley surrounded by green hills. These stone giants covered with dense forests are like guardians of the beautiful city. The old part of the city is built “on the water”. Currently, approximately 40 thousand people live there. As the city is located on a riverbank, fishing is a traditional occupation of local people.
Shopping in Bandar Seri Begawan - main shopping streets, outlets and boutiques
The capital of Brunei delights its guests with an abundance of large shopping centers and colorful markets where they can buy the most popular regional goods. One of the largest and most …

Open
First settlements on the site of modern Bandar Seri Begawan appeared yet in the 7th century. However, people had to change their location several times. First, they lived in Kota Bhatu, and then Kampong Ayer became their home. In the 20s of the previous century, Bandar Seri Begawan is its current borders became their home. Initially, the city had another name – Brunei Town. It was decided to change its name to Bandar Seri Begawan in the 70s of the previous century. The new name honors Sultan Haji Omar Ali Saifuddien III.
Local people greet each other by slightly touching a hand and then pressing it to heart. Men and women do not touch each other for greeting – such actions are considered vulgar. It is also prohibited to point at something with fingers. Women mostly wear modest clothing, especially when they visit mosque – their dresses must cover knees and elbows. It is recommended not to wear anything yellow because only sultan is allowed to wear clothing of this shade. Copyright www.orangesmile.com
Family holidays with kids in Bandar Seri Begawan. How to entertain your child, things to show to children.
If you are planning to visit Bandar Seri Begawan with children, there will be plenty of entertainment options to chose from here. You will find everything you need for an exciting, …

Open
What attractions can tourists find in Bandar Seri Begawan? The majority of tourists visit Omar Ali Saifuddien Mosque, which is, perhaps, the most famous religious landmark in the city. Tourists interested in old mosques should visit Seria, a settlement approximately 100 kilometers away from the capital. Take a stroll to the central part of the city, to the stadium. Not far from this venue, there is an important religious landmark for all Muslims - Pekan Seria. When translated from Malay, the mosque’s name means “the mosque of the city of Seria”. 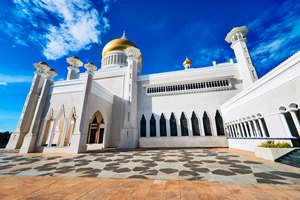 This building is unique because Pekan Seria was the first mosque in the country. It has an elegant design in classic traditions of Muslim architecture. Even foreign tourists mention that the mosque is a perfect addition to the beauty of local nature.
Excursion over cultural sights of Bandar Seri Begawan - 'must visit' points of interest
Bandar Seri Begawan offers its guests a sea of opportunities for exciting tours. You will have a chance to see wonderful mosques and contemplate the decoration of Buddhist temples. Many … 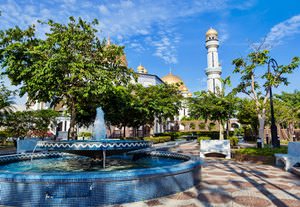 The bridge has a length of 189 meters and 14 meters in width. The building works started more than six years ago and lasted almost two years. The official opening ceremony took place in autumn 2013. Sultan Hassanal Bolkiah and the Prime Minister of Malaysia Najib Razak were present at the event. Nowadays, many local people believe that if you walk on the bridge holding hands with someone, your friendship will last a lifetime and feelings will strengthen.
Your active city break in Bandar Seri Begawan. Attractions, recreation and entertainment - best places to spend your day and night here
Tours of the capital’s iconic sights can be diversified with no less exciting entertainment. A boat trip on the Brunei River would be a very interesting option. The river remains an …

Open
The Royal Regalia Building or Royal Regalia Museum is one of the most famous attractions of Brunei’s capital. This is a relatively new building, the age of which is only 25 years, but it has already become an important part of all excursions in Bandar Seri Begawan. Initially, this was a so-called gift for the sultan’s anniversary. The museum is located in the central part of the city, and this fact once again proved the importance of the cultural life in Bandar Seri Begawan. 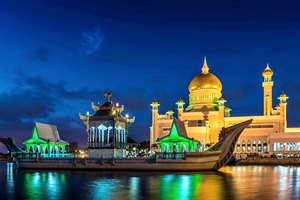 The museum exhibits a large collection of royal regalia – a chariot, crown, and ceremonial weapons. There are also important historical documents that shed light upon the foundation of the sultanate in the country. The main hall displays precious emeralds, ivory, nephrites, silver and gold jewelry. These are priceless items of incredible beauty. One hall of the museum exhibits weapons and armor of sultans, as well as their trophies.
Shopping in Bandar Seri Begawan - main shopping streets, outlets and boutiques
The capital of Brunei delights its guests with an abundance of large shopping centers and colorful markets where they can buy the most popular regional goods. One of the largest and most …

Open
It is easy to reach Bandar Seri Begawan by airplane from Singapore. It will quickly take you to the capital of Brunei – the flight lasts only 2 hours 10 minutes. There are also flights from Kuala Lumpur. This flight will be even shorter, and you will reach Bandar Seri Begawan in just half an hour. The airport and the city center are connected by buses that regularly transfer passengers. It is always possible to rent a taxi.

This guide to iconic landmarks and sights of Bandar Seri Begawan is protected by the copyright law. You can re-publish this content with mandatory attribution: direct and active hyperlink to www.orangesmile.com.
Bandar Seri Begawan - guide chapters 1 2 3 4 5

Distance from Bandar Seri Begawan center - 1.5 km.
One of the main elements of the decoration is a marvellous mosaic. It consists from 3,5 million pieces and belongs to hands of Venetian masters. The mosque height is 52 meters, from its top you can see many nearby areas. Tourists like to walk near the mosque. One of the main peculiarities of the mosque is the minaret, made in the Italian Renaissance. This style is quite rare used for mosque decoration. The minaret has an elevator that within a second bring people to the top. The mosque has the most popular and interesting viewing point in the city. … Read further

Sightseeing in Brunei: things to see

An airplane flight from Thailand is the simplest and most affordable way to reach Brunei. The international airport in Bandar Seri Begawan accepts flights from Bangkok. Some western cities in Malaysia also have air links with the country, but these flights are not so regular. The Malaysian states of Sarawak and Sabah have frequent buses and ferries to Brunei. … Open

Search touristic sites on the map of Bandar Seri Begawan

Kota Kinabalu
Kota Kinabalu, the capital of the state of Sabah, is one of the ten largest cities in Malaysia. The city located on Borneo Island is named after nearby Mount Kinabalu. It is incredibly attractive in the eyes of active tourists and gathers thousands of foreign visitors every year. The city partly owes its popularity to its favorable position: it lies on the coast of the South ... Open »
Kalimantan Island
Kalimantan is the part of Borneo Island owned by Indonesia. These unique places attract thousands of travelers. This exotic island is especially popular among fans of beach recreation and eco-tourism. Each city of Kalimantan is a storehouse of interesting attractions and cultural centers, so fans of excursions won’t be bored during their vacations. Pontianak would be a very ... Open »
Nha Trang
Many European tourists arrive in Nha Trang by air, making a connecting flight to Guangzhou. If you choose to travel from Hanoi, Ho Chi Minh City, or other Vietnamese cities, it is more comfortable to take a bus or train to Nha Trang. The flight is roughly fourteen hours long. At the airport, tourists can always call a taxi or get on a bus to the city center. ... Open »
Sulawesi Island
Indonesian island of Sulawesi can safely be called one of the most amazing parts of the world. Everything here is unique: the diversity of landscapes, rich cultural traditions and historical heritage. A welcome addition to that is friendly and welcoming attitude of the indigenous population. If you look at the island from a bird's eye, then it would resemble an orchid. Its ... Open »
Ho Chi Minh City
The tourists who prefer to use a personal vehicle during their vacation should consider that locals can’t be called disciplined drivers. Many rules on the road are only conditionally followed. So, it would better for inexperienced drivers go on a public transport. Those who decide to rent a scooter don't need to look for specialized centers of the lease. You just need to ... Open »
Bintan
While walking around the Kaval port town, you can combine admiring the picturesque nature with visiting historical sights. Many ancient buildings have survived here, and nowadays, you can see huge stone stoves in which charcoal was produced a hundred years ago. Ancient fishing villages of Sebung Pere and Busung are ideal for exploring the lifestyle of the local population. ... Open »

All about Bandar Seri Begawan, Brunei - sightseeings, attractions, touristic spots, architecture, history, culture and cuisine. Prepare your trip together with OrangeSmile.com - find out the 'must see' things in Bandar Seri Begawan, which places to visit, which excursions to take, where the breathtaking views are waiting for you. Planning your trip with this travel guide will help your to get the most out of Bandar Seri Begawan in few days.