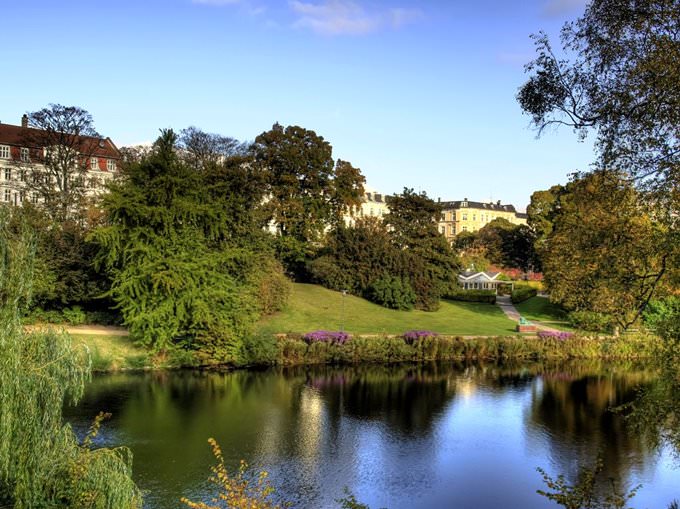 started its history in 1755, when two lovers escaped from the castle, opened a small tavern and then a guesthouse. The hotel got its name after an Anglophile club that was located in the building after the original owners had passed out. The hotel suffered damage from fire twice, and during the latest war the building was used as headquarters of the German troops. During several centuries the hotel was a leading one in the country, so its luxurious rooms were used by famous people who visited the country. Among legendary guests of D Angleterre, you will find presidents, members of royal families, celebrities, etc. Churchill, Madonna, Andersen, and many other famous personalities among its guests. D Angleterre is a magnificent example of luxury, elegance and refined taste.
Radisson Sas Royal Hotel
Check on the map. From Copenhagen center - 1 km
Internationally famous Radisson Sas Royal Hotel

highly values its creator - Arne Jacobsen, who was one of the most notable Dutch architects of the 20th century. Items, created by the master, have become true masterpieces in the world of design. This has always attracted famous people to the hotel, who prefer to stay at Radisson SAS Royal Hotel during their visits to Copenhagen. In different times, the hotel greeted such famous guests as Frank Sinatra, Louis Armstrong, Dalai Lama and various celebrities. Having stayed at this legendary hotel, you will be able to admire one of the best works of the talented designer. Copyright www.orangesmile.com
Admiral Hotel Check on the map. From Copenhagen center - 1 km
In 1787, a warehouse for the purpose of keeping grain was built in the city. The building was fully restored in 1978, and Admiral Hotel

was open in it. The building still features wooden beams made of a two hundred year old pine, while brick walls and arched passages remind of the respectable age of the building. The hotel’s interior was carefully developed and so all furniture was made specifically for this project. Now rooms and public zones feature massive teakwood furniture that looks awesome together with the antique beams. Careful restoration has turned the hotel into one of the most original places in the city, so Admiral Hotel can safely be called a landmark. That is not just a hotel, but a piece of another world that brings visitors back to the past, to the kaleidoscope of important events in the history of Denmark. The residence of the king was located close to the hotel, and its ceiling beams still have marks that remind of frequent attacks from the seaside. A stay at Admiral Hotel is more than just a visit, but an opportunity to feel the past. Antique style only adds to uniqueness and authenticity of the place. Admiral is an ideal place for travelers who want to see life and landmarks of Copenhagen.
Check the hotel prices and availability

Search hotels in Copenhagen for your taste

Famous hotels in the region of Copenhagen

Hamburg
The historic hotel, Atlantic Kempinski Hamburg, which received its first guests in 1909, has been the center of the cultural and bohemian life of the city for more than a hundred years. A variety of cultural events take place within its walls, among them are; art and design exhibitions, fashion shows and music concerts. This fashionable hotel is famous among fans of James ... Open »
Berlin
When mentioning historic hotels in Berlin, it’s simply impossible to fail to add Ellington Hotel Berlin to this list. The hotel was open in 1920, so it has miraculously retained the atmosphere of the “golden twenties”. Ever since the opening, the hotel has been attracting many famous and rich guests of the city. Such stars as Ella Fitzgerald and Louis Armstrong performed ... Open »
Stockholm
The prestigious Grand Hôtel Stockholm is well-known to gourmet travelers from all over the world. Each of the elite restaurants of this hotel is awarded many honorable titles. The historic hotel itself is present in the list of the best hotels in the world. Grand Hôtel Stockholm served its first guests in 1874. The two restaurants of the hotel, Mathias Dahlgren and Mathias ... Open »
Amsterdam
Hilton Amsterdam is a great choice for business travelers. This hotel is located near a canal and has its own quay, a spacious open terrace and a charming roofed terrace that is heated by a fireplace. That cozy terrace is a wonderful place to spend a rainy evening while enjoying your favorite drinks. In 1969, John Lennon and Yoko Ono stayed at this hotel. Travellers are welcome ... Open »
Gent
Hotel Castel is equally liked by active rest fans, comfort devotees, and travelers who cannot imagine a single day in Belgium without drinking the magnificent local beer. The hotel is conveniently located close to Gent-Sint-Pieters railway station, allowing guests to travel freely in the territory of the city and its suburbs. The popular hotel is famous for one of the best beer ... Open »
OrangeSmile.com - online travel reservation expert providing reliable car rental and hotel booking services. We feature more than 25.000 destinations with 12.000 rental offices and 200.000 hotels worldwide.
Secure Server