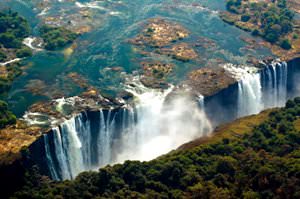 At the border of Zimbabwe and Zambia finds its place one of the most beautiful waterfalls in the world - Victoria Falls. It is located on the Zambezi River and has a width of about 1 800 meters, the maximum height of the waterfall is 120 meters. David Livingstone, the Scottish explorer, is believed to have been the first European to view this unique natural attraction in 1855. It was he who named his discovery in honour of Queen Victoria.
It is important to note that the waterfall has a lot of unique features which distinguish it among others. Victoria Falls is the only waterfall on the planet with a width of more than a kilometre and a height of more than one hundred metres. Local residents found the fall much earlier and gave him a resounding name "the Smoke that Thunders" that fully reflects another important feature of the waterfall. The water falls from the rocks with such a force that forms a thick fog. One can see it at a distance of 20 km in fair weather.
The first bridge across the Zambezi River was built in 1905 and was located in the vicinity of the waterfall. It is believed that after the opening of the bridge this amazing natural attraction began to allure tourists. It is noteworthy that the locals have found practical application to mighty waterfall. Several hydroelectric power stations have been built on the shores of the Zambezi River. So the major cities of both countries are being supplied with electricity nowadays. After admiring the spectacular scenery tourists can visit the Museum of Victoria Falls and learn many interesting things about this beautiful creation of nature. ... Complete sights collection 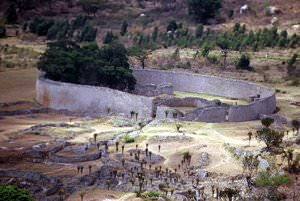 In the south of Africa is the unique ruins complex under the general name 'Great Zimbabwe'. Not everyone knows that the African land of the same name was named in honor of this archaeological site. According to the historical data, this area was inhabited several thousand years ago by the Shona tribes. These people have built the numerous buildings whose ruins are so attractive to modern tourists and researchers.
According to the approximate calculations, Great Zimbabwe was founded in the 12th century BC. After the foundation, the city has existed for more than 300 years. The reason why the great city has become empty after a few centuries remains unknown. The main particularity of the ruins is their architectural features. All the buildings in Great Zimbabwe were constructed from the same stone monoliths of regular form, which were placed one on top of the other without any binder.
Strangely, the buildings have been partially preserved after more than 3,000 years. One of the most interesting parts of this archaeological complex is the so-called 'street barriere' - the huge stone circle, whose diameter is 89 meters. The general length of the stone wall is 244 meters, and the height of the building reaches 10 meters. Modern scholars can only speculate about the purpose of these systems. ... Complete sights collection 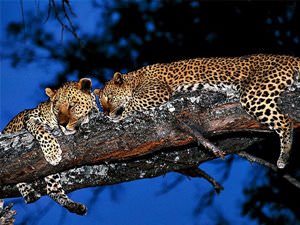 Travellers who prefer natural sights can travel to Mana Pools in Zimbabwe. This piece of undeveloped nature lies in the northern part of the country, on the banks of the Zambezi river. Its main peculiar feature is the abundance of marshes, fresh water of which attracts numerous wild animals. Typical inhabitants of the nature reserve are buffaloes and elephants, leopards and cheetahs, as well as the Nile crocodile.
The area of ​​the nature reserve is 219600 hectares. During a dry season it becomes a real rescue for the populations of wild animals. The surrounding rivers dry out completely in the drought, so the animals go to the swampy districts. During excursions through the nature reserve visitors can see rare black rhinos, as well as African elephants and lions. In this area hyena dogs also live, as well as various species of antelopes and zebras.
Through the territory of the national nature reserve, exciting safaris are regularly held. The best time to travel to this picturesque area is the period from May to October. There are several campsites and lodges on the territory of the nature reserve and in its surroundings, so you can spend a few days in this unique area. The conservation area will also be enjoyed by anglers, who, accompanied by experienced guides, can go to one of the local lakes. ... Complete sights collection 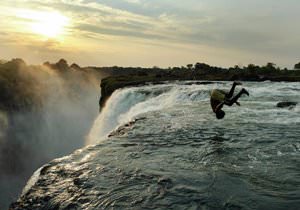 Some incredibly scary pools were created by nature itself. A great example is the Devil's Pool. It is located at the top of Victoria Falls. This powerful waterfall is the highest in the world. It is very life-threatening to swim in its pools. More than 15 people have died as a result of such seemingly innocent entertainment in recent years. The height of Victoria Falls is 128 meters. It dumps tons of water into the narrow gorge every second.
The water washed out a fairly large natural pool in front of the abyss, into which the waterfall flows. Travelers from all over the world are eager to swim in it and take memorable photos. Swimming at a distance of less than a meter from the edge of the abyss is great entertainment for everyone who loves the thrill. All that separates in this case from falling into the abyss is a small natural barrier of stone. Its thickness is about 30 centimeters.
This amazing natural pool is located near Livingston Island. Travelers can only reach it by water. It's almost impossible to get to the Devil's Pool on your own. You need to climb the last hundred meters to the top on foot through very difficult terrain. Only experienced local guides can guide tourists to safe places. You will be able to easily avoid all the dangerous trends and pitfalls with them. Excursions to the pool are conducted every day. However, it is recommended to book them in advance. The number of tourists who can visit the natural attraction daily is limited. It is about 60 people. ... Complete sights collection
This article about unique points of interest in Zimbabwe is protected by the copyright law. You can re-use the content, but only under the condition of placement of an active link to www.orangesmile.com.

All unique landmarks of Zimbabwe on the map

Photogallery of landmarks of Zimbabwe