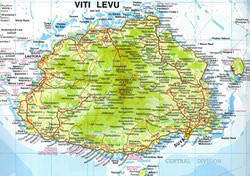 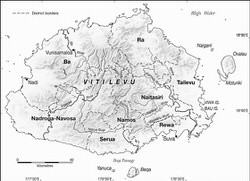 1. You can zoom in/out using your mouse wheel, as well as move the map of Viti Levu Island with your mouse.
2. This interactive map presents two modes: 'Biking Routes' and 'Hiking Routes'. Use the '+' button on the map to switch between them.

This Viti Levu Island map has two modes: 'Railway Network' and 'Landscape & Rural Map'. Use the '+' button on the map to navigate.

Overview of festivals and celebrations in Fiji

One of the central holidays of national importance is Fiji Day, which is celebrated in the middle of October. The celebration is based on a double event. It was specifically on this day in the second half of the 19th century, that the first Fijian king Takombau renounced the throne in favor of the British Queen Victoria. Also on this same day in the second half of the 20th century, Fiji gained independence from the British crown. The week before the holiday is called Fiji Week, during which celebrations are organized for the glory of national unity, as well as religious and cultural diversity. The event features rallies and speeches by Fijian politicians, concerts and handicraft exhibitions, educational and recreational activities, entertainment for children, and charitable evenings. Despite almost half a century of being a republic, the Queen’s Birthday which falls on the middle of June, is still officially celebrated to this day on the islands. … Open

Our guide to Viti Levu Island

Also, don’t miss a chance to see Lautoka – the local Sugar City. It’s particularly famous as a sugar-production centre. Here you can join a tour group and have an excursion to the sugar factory or just explore the way sugar mill (was constructed in 1903 and still functions) works on your own. There is also a large Hare Krishna temple which is always crowded with pilgrims here on Lautoka. You can have … Open

Outrigger On The Lagoon Fiji is worth an extra mentioning among the luxurious hotels of Viti Levu. The hotel represents a decent choice of luxurious room and picturesque bungalows with reed roofs. Outrigger On The Lagoon Fiji is situated in the town of Korotogo just a few steps away from the coast. There's an excellent day spa, an upscale golf course, as well as tennis courts, sports playgrounds and own gear rental … Open

You should definitely try diving in the Beqa Lagoon. There is a plateau there 20-30 meters down. Dozens of rocks are all around the plateau and covered with various corals. It’s a highly nice place and diverse animals live there for the whole year. If you want to just take sunbaths, then the best point for it is near the Pacific’s coast. Even though Suva and Nadi provide guests with clean spacious urban … Open

Besides, cassava is definitely worth trying too – it’s a dish consisting of baked or fried tapioca with coconut milk. Vegetarians must like boiled duruka – a local vegetable which is also known as «Fijian Asparagus». Breadfruit can also be cooked and many variations, plus people make chips from it. Then, don’t miss trying ika – baked fish – and vakalolo – a cassava pudding. Palusame is … Open

If you a guest in somebody’s house, bring a small gift to a master and surely accept a gift in return. Entering a house, take off your shoes. Moreover, you’ll be very likely invited for a traditional dinner. There will be no special ceremony, people just sit in a down on a mat around various dishes. First locals give food to guests, then to elderlies, then to men and kids, and then to women. … Open

Fans of shopping are welcome to explore colorful local markets. The largest market of the region is located in Lautoka. This is a very interesting place where visitors can find colorful locally made textiles, interesting beach gear items, and authentic souvenirs. Many come to local markets to purchase exotic fruits and walk among stalls with fish and seafood. In the evening, there are always interesting … Open