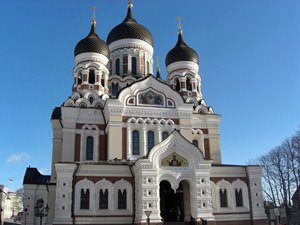 Tallinn Town Hall, St. Olaf Church, Tallinn TV Tower, and Estonian Maritime Museum are the main candidates that compete for the title of the major architectural symbol of Tallinn. Just like in the first part of the guide, you can watch each monument by viewing its colorful 3D model in the Tallinn flyover video on the left. Don’t forget to access our photo gallery and an overview of interesting facts regarding every monument. The map of the most important architecture sights of Tallinn (located below this guide) will help you to create your own sightseeing tour through Tallinn. 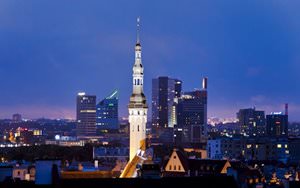 Facts:
» The city management of medieval Tallinn (Revel at that time) is aged over 600 years. The single-storied limestone building was first mentioned in the written source in 1322.
» The Town Hall was equipped and widened at the end of the 14th century. Then, the second floor with audience halls was built. The tower was then constructed. In 1530, the vane called “Old Thomas” was attached.
» The weirs resemble copper dragons’ heads. The basement of the Town Hall serves as a wine cellar. Alcohol sales brought a huge profit to the city. The windows in the basement have stepped sills. There is also a preserved fireplace. There is a burger-ish hall or a lobby above it. Festive events were held and foreign actors performed here.
» The room is well illuminated. You can see Christmas patterns on the piles that uphold the vault. There are municipal arms above the front door.
» The part of the building is occupied by the Master’s Hall. The Town Government sat and court hearings were held here. The red walls with pictures of coat hearings prove this.
» There is a preserved brick chimney of the 19th century and a hole for hand washing in the kitchen. The sewerage system has been also preserved to this day.
» The Town Hall is a place where treasures worked. Later, the city mayor occupied the room. 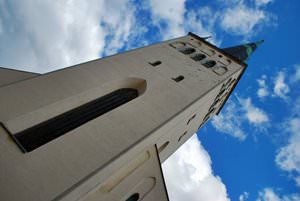 Facts:
» As the preserved archives say, the church was built in 1267 as a Catholic construction and belonged to nuns from the convent.
» The building was struck by lightning 8 times. It was on fire during a thunderstorm several times. After the fire in the middle of the 19th century, its area reduced to 123 m.
»  The spire served as a pointer for sailors.
» The King of Norway was canonized for his godly deeds here. St. Olaf Church is named after him.
» The building was reconstructed in the 15th century. It started to look like a basilica with rectangular pillars.
» The Chapel of the Virgin Mary was built in a hundred years. There is a spiral staircase leading to the observation platform. 232 steps have different heights, which hinders the ascent.
» 1950 has seen the consolidation of seven religious communities under the arches of the temple.
» The church is distinguished by intersecting carcass arches that make a geometric pattern of stars. There is the St. Olaf bas-relief behind the altar. There is a preserved slab that reminds of the public figure and instigator of the construction.
» The Biblical words are engraved on the symbolic grave of Christ. Church services are held here. 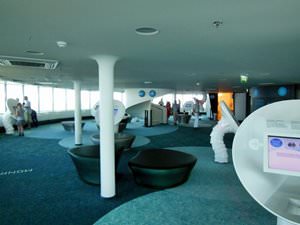 Facts:
» The TV Tower was opened in 1980 in commemoration of the Olympic Games. It broadcast sports events. Its intended purpose is to provide communication equipment for receiving TV and radio signals.
» Excursions around the building have been held since 2012.
» The Tallinn TV Tower is built of concrete and iron and resembles a trunk that is 190 m high. 124-meter iron mast is attached to it.
» On the ground and 1st floors of the hall, you can see pictures of the building process and visit a gift shop. There is a conference hall, a cinema, and stands dedicated to the country and the capital.
» You can use the high-speed lift with a height sensor.
» There is an outdoor observation platform in the shape of the horseshoe with field glasses and interactive displays. It is located at the 21st level (170 m from the ground) and protected by the fine iron mesh. Here, you can read copies of newspapers about the putsch of 1991.
» If you get up the spiral stairs to the 21st level, you will find an outdoor terrace with a small cafe.
» You can look through the glass hole in the floor and see 80 m of empty space under your feet.
» Fans of extreme are offered to go round the tower for half an hour at a height using special ropes. 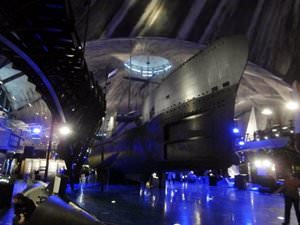 Facts:
» In the Maritime Museum, you can learn more about the secrets of the port service, equipment of seaworthy ships, artifacts found on the sea bottom, and the history of voyages. The Museum is located in the Fat Margaret Tower and in the hangar of the Air Harbour on the sea coast.
» You can observe the entire Tallinn port from the upper level of the tower. At the 4th level, there are tracking devices, the collection of sea navigation maps, fishing traps, archival documents and pictures, ships’ models, and the collection of naval mines.
» In Lennusadam (the harbor), you can see real seaplanes, working warships, and the oldest schooner in the country. The steam icebreaker (1914), the biggest exhibit, is moored to the berth. Tourists can taste dishes from the ship galley.
» The remains of the old ship that was constructed without any nails at all will also attract attention. You can inspect the “Lembit” Submarine from the inside.
» One of the collections pays tribute to “Estonia” Ferry sinking in 1994. Its model is kept here.
» You can see the records of bottom researches made by the robot on big screens in the Interactive Underwater Archaeology Museum. The excursion will end with the visiting of the huge aquarium.

This guide to architecture monuments in Tallinn is protected by the copyright law. You can re-publish this content with mandatory attribution: direct and active hyperlink to www.orangesmile.com.
Tallinn - guide chapters 1 2 3 4 5 6 7 8 9 10 11 12 13 14 15

Plan your own tour over Tallinn on the monuments map

Search for architecture monuments of Tallinn on the map

Tours through neighbours of Tallinn

Helsinki
Every year, the sacrament - the queen’s coronation - is held at the city cathedral. One of the 10 beauties had been selected by vote before. After the coronation, the maiden in a white dress with a crown and lighted candles goes to the square with her friends. There was a church at one time. It was dismantled and the territory was extended to construct a new church. The construction lasted 22 years. The updated church was finished in 1852. ... Open »
Riga
Riga Cathedral is one of the oldest attractions in Riga and all the Baltic States. Rigas Domes is translated from Latin as “The House of God”. The first stone was solemnly laid on 25 June 1211. This ceremony was visited by the first bishop Albert von Buxthoeven. The construction of the cathedral was completed in 1270. Over the centuries, the cathedral had been destroyed and reconstructed many times, so its exterior combines features of ... Open »
Saint Petersburg
The Saint Isaac Cathedral is the largest Orthodox church in St. Petersburg and the unique architectural structure dominating in the downtown. The height of the cathedral is 101.5 m, the length and width is about 100 meters. The building of the cathedral is decorated with 112 monolithic granite columns of different size; statues representing 12 of the Holy Apostles are located on the corners and the tops of the gables. The Saint Isaac Cathedral ... Open »
Stockholm
The Nordic Museum is located on the island of Djurgården. It keeps within its walls the history and culture of the Swedish from 1520 to the present day. During his life, collector Artur Hazelius (1833 - 1901) collected, bought pieces of furniture, clothes, toys from all over Sweden and other northern countries. The permanent museum building was erected in 1907. This magnificent building had features of the best Danish palaces. The main ... Open »
Vilnius
The temple of God was built at the site of the Pagan temple, which is reflected in the masonry of the 13th century. The nobles were crowned in the old Vilnius Cathedral. The eminent nobles are buried in underground tombs (there are over 20 tombs). Nowadays, public ceremonies are held here. Over the years of its existence, the building was repeatedly destroyed in a fire and rebuilt. The cathedral has gained the highest status, a small basilica. ... Open »
OrangeSmile.com - online travel reservation expert providing reliable car rental and hotel booking services. We feature more than 25.000 destinations with 12.000 rental offices and 200.000 hotels worldwide.
Secure Server