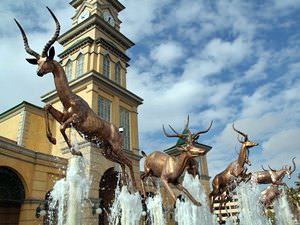 The nature and geography of South Africa are very diverse. In this country, you can find any terrains and climatic zones except for tundra and polar deserts. The Republic of South Africa is located in the very south of the African continent. Its eastern coast is washed by the waters of the Indian Ocean, and western by the Atlantic Ocean. The most common terrain of the country is hilly plateaus located in its central part. In the north of South Africa, mountains with a height of up to 1.5 kilometers rise and the Limpopo River flows. Its valley is overgrown with wild tropical forests. There are 2 deserts in the country. These are the Kalahari and Namib deserts. Drakensberg Mountains stretch along the Indian Ocean coastline.
South Africa sightseeing - top places to visit
The Republic of South Africa offers a variety of entertaining activities to its guests, so there’s no wonder why every year more and more travelers …
Read further
South Africa has 20 national parks and more than 100 reserves, both public and private. Some of them, besides observing the life of wild animals, also offer hunting for them. In almost every park or reserve there are camps designed for travelers. Accommodation options can be different, ranging from simple tents to individual apartments, depending on the budget and preferences.
The oldest national park in South Africa is Kruger Park established in 1898. It was founded by the only president of the Transvaal Republic, Paul Kruger, a year before the outbreak of the military conflict with the British Empire. Located 500 kilometers from the City Park occupies an area of Johannesburg areas of Limpopo and Mpumalanga provinces. Kruger National Park has the status of largest and most profitable National Park on the planet! Numerous meadows and pastures of the park are home to 145 animal species, about 450 species of birds, and 100 species of reptiles. The big five animals of Africa - elephant, rhinoceros, leopard, lion, and buffalo - became the symbol of the national park. The flora is represented by 460 species of trees and shrubs and over 200 grass species. In the north of the park, scientists have discovered an early man site with stone structures. Kruger Park is included in the list of World Heritage Sites. Copyright www.orangesmile.com
National cuisine of South Africa - specialties, recipes and restaurants
The motley Republic of South Africa full of contrasts has absorbed the traditions of Africa, Asia, and the West. The South African cuisine is …
Read further
The Pilanesberg Game Reserve located 13 kilometers away from Sun City has been operating since 1979. It lies in the crater of an extinct volcano. Its territory is surrounded by a circle of 4 hills. Today, the park has become one of the most visited tourist parks in South Africa. The park's main purpose is to preserve a number of animal species from extermination by poachers. In the center of Pilanesberg, there is a picturesque lake, which has become home to various waterfowl species. In addition, the park is inhabited by over 6,000 species of animals and 350 species of birds. The park offers a number of hotels allowing to observe the animal and plant life around the clock. 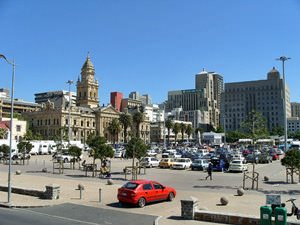 In the Sundays River Valley, 70 kilometers away from Port Elizabeth, you will find Addo Elephant National Park. He was created to save the remaining 11 elephants in 1931. At the present time, the park has grown and already become home to 360 elephants. Previously, the park was poorly fenced and the elephants freely walked through the neighboring territories, becoming victims of poachers and local residents. To save the last remaining individuals, workers of the park decided to bring pineapples and various citrus fruits to the center of the Addo. Eventually, the elephants got used to the feeding place and ate so much fruit that began to die from its oversupply. In this regard, the feeding of Addo elephants with citrus fruits is strictly prohibited. In addition to elephants, rhinoceros, buffaloes, antelopes and other representatives of the African fauna live in the reserve.
National traditions and mentality of people in South Africa
South Africa is a country amazing in many ways. It has 11 official languages, including English, so most locals are fluent in it. The culture of the …
Read further
The Tsitsikamma National Park stretches in a narrow strip along the coastline of the Indian Ocean for 80 kilometers. It protrudes 5 kilometers into the ocean. Tsitsikamma became the first marine park in South Africa. This protected area boasts of a large number of freshwater reservoirs and waterfalls. The life of birds can be observed without leaving the hotel room in case of staying in cozy small houses equipped directly on the trees. In the park, besides birds, you can also visit a monkey reserve or a mini-park of snakes, as well as a nursery of cheetahs or elephants. Fans of outdoor activities will be able to try a bungee jump from a waterfall, raft down the Storm River, go canoeing or fishing.

This article about nature and national parks of South Africa is protected by the copyright law. You can re-use the content, but only under the condition of placement of an active link to www.orangesmile.com.
South Africa guide chapters 1 2 3 4 5 6 7 8 9 10 11

In South Africa, in the province of Mpumalanga there is one of the outstanding natural attractions of the planet - Blyde River Canyon. Its maximum depth is 1,372 meters and the length of the gorge is 26 kilometers. Men have begun exploring the canyon more than 100,000 years ago; in ancient times the valley was home to the Swazi tribes. During the study, scientists have discovered cave paintings in the canyon, as well as the remains of ancient people who died in tribal wars.

Currently, the main inhabitants of the canyon are animals, including primates occupying local woods and rare kudu antelope attracted by scenic green meadows. It’s also worth noting that there are wild animals in the canyon, including leopards, so it’s not recommended to admire its spectacular scenery without a … Read all
All unique sightseeing South Africa

Cape Town
Don’t forget to make a walk through Companies Garden Park, the territory of which is the location of two architectural attractions - St. George Church and the Parliament building. Cape Town is also rich in natural attractions. A visit to the Cape of Good Hope Nature Reserve is included in virtually all excursions. Inside the reserve you will find several dozen routes. During their walk here visitors will be able to see the most beautiful natural places. Table Mountain is a no less important … Read more

Johannesburg
The city is home to a huge number of various museums and theaters. For example, Market Theatre Cultural Center is known far beyond the borders of the country. Here are located three theaters, art galleries, as well as several restaurants, nightclubs and bars. This is a unique entertainment complex that is perfect for relaxing and having fun every day. Guests of the city should definitely not forget to visit Museum of Africa, which will help visitors to get acquainted with history and culture … Read more

Pretoria
Klapperkop fort’s history is interesting too, its territory involves a lot of symbolic monuments and memorials. Among examples of Military architecture it is important to note the fort Wonderboompoort. It took part in less military operations, so it was kept to the present time almost in primeval form. One of the most interesting cultural establishments of Pretoria is Kruger House. Built in 1844 it keeps the priceless collection of SAR president’s personal things, the age-old residence is … Read more

Stellenbosch
Fans of outdoor activities and walking will like Dorp Street, which is recognized as one of the most beautiful streets in Stellenbosch. It’s the place where visitors will see many beautiful and old buildings. Surprisingly, all houses look virtually flawless despite the fact that many of them were constructed centuries ago. There are also unusual cultural centers in the town, and The Village Museum is, without a doubt, one of the leaders. This is the place where visitors will learn more about … Read more