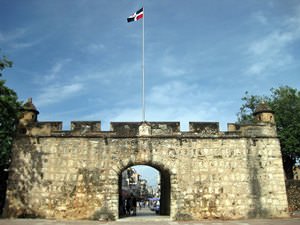 Modern culinary traditions of Santo Domingo present a unique fusion of African and European cuisines’ trends and cooking technologies. Local restaurants offer as traditional European treats on the menu so original ethnic dishes which will surely be of great interest for exotic treats fans. Fish treats and meat dishes are of great popularity among foreign guests of the resort city. The treats are commonly added with garnishes made of special roast bananas or potato being a traditional sort of garnish in most cuisines of the world. Another popular type of garnish is rice which is a basic stuff for numerous excellent dishes.
Guide to Santo Domingo sightseeing - things to see and to visit
The famous voyage of Christopher Columbus was marked by the arrival of his ship at the shores of the New World. It is the land of Santo Domingo that keeps the memory and centuries-old …

Open
Local cooks practice rather unusual ways and technologies of dish preparation. Meat and fish are usually coal roasted being wrapped in banana palm leaves. When heated the leaves produce a peculiar oily substance with nice flavor thus a treat does not burn and gets saturated with aromas greatly exciting the taste. Roast bananas are among the most favorite treats for many tourists. Local folks eat the banana treat almost every day. It should be noted that for roasting local cooks pick up the only sort of bananas named platano. These bananas have green color even when get these are ripe. Fresh platano bananas are not consumed.
Among common dishes of local residents the bandera is well worth mentioning and trying. This is a rich nourishing stew made of various vegetables, meat and seafood. Meat dishes gourmands should necessarily try special roasted pork named the puerco en puya. A genuine delicacy in Santo Domingo is considered to be grilled pork. Numerous street cafes and bright market places offer the city guests traditional flat cakes named casabe which are cooked of manioc. Copyright www.orangesmile.com
Authentic traditions, festivals and lifestyle of Santo Domingo inhabitants
Many tourists aim to visit the resort city of Santo Domingo in late February as exactly in this period the city holds scale and the most interesting ethnic holiday being the Carnival. The …

Open
The traditional flat cakes may be served and added to the main courses instead of bread. These cakes may be also cooked with various stuffing. An original local fast food treat is considered to be the tostones. These are thin slices of banana fried in boiling oil till getting crispy. Seafood fans will much appreciate fish which is served in local restaurants under various sauces and with original garnishes. One of the most popular dishes of local cuisine is considered to be fish served under the pescado con coco sauce which is cooked of coconut juice. In the heart of the dessert menu of local cuisine tourists will discover various tropical fruits that is why local sweet treats will be of great interest for those tourists who follow reducing diet.

This guide to cuisine and restauraunt in Santo Domingo is protected by the copyright law. You can re-publish this content with mandatory attribution: direct and active hyperlink to www.orangesmile.com.
Santo Domingo - guide chapters 1 2 3 4 5 6

Dominicans love to drink "Malta Morena" - a vitamin-rich sweet non-alcoholic drink with hops, corn, malt, and sugar. Locals are very fond of "Manga" - a dish of plantain bananas (extra large bananas) that boiled, mashed and mixed with fried red onions. Favorite desserts are a sweet, thick cream made of beans cooked on low heat, sweet potatoes, as well as "Flan" - a custard dessert, usually with caramel, but often with the addition of coconut, pineapple, and other fruits. … Open

Searching where to eat - restaurants and cafe on Santo Domingo map

Cuisine and restaurants in the neighbours of Santo Domingo

La Romana
La Romana is one of the largest suppliers of meat in the region, therefore, original meat dishes are as common as fish in local restaurants. Fresh meat dishes can be tasted even in small local-oriented restaurants. Another important component of local gastronomy is rice, most often it is served as a garnish to meat and vegetable dishes. Hearty dishes from legumes are offered at ... Open »
Bavaro
Culinary experts characterize the national cuisine of Bavaro as an original combination of African and European traditions. Local restaurants offer a range of interesting meat and fish dishes – local chefs are restless experimenters who like adding unusual spices. Stewed or fresh vegetables, beans or banana are the most typical garnishes in the region. It is worth noting that ... Open »
Providenciales Island
You should try the local cuisine of different countries, travelling around the world. It may seem that true gourmet won’t find anything delicious on Providenciales. Of course, the local culinary traditions don’t have a rich thousand years history because the island itself was inhabited only five hundred years ago. However, since then, the island chefs have been adapted ... Open »
Tortola
In general, Tortola lives by tourism, and therefore you can find dishes of English, French, American, German, Japanese, Chinese and Indian cuisine in local cafes and restaurants. However, if you want to fully plunge into the atmosphere of the island culture, it is best to order the dishes that the locals have been cooking for centuries. Alas, there are very few dishes left by ... Open »
Oranjestad
Local restaurants will surely appeal to those who are partial to seafood specialties. Although the resort has restaurants of various gastronomic directions, more and more travelers give preference to national restaurants. Many popular restaurants and cafes are located in large shopping and entertainment centers and close to important tourist attractions. Some attractive ... Open »
Curacao
Local cuisine is distinctive and original, and it is widely compared with European; however, national traditions aren’t deprived of Creole flavor. An abundance of seafood and vegetable salads, excellent meat treats and exotic fruits would please even the most discerning gourmets. Local chefs prefer to cook most meat and fish dishes on barbecue or an open fire, which also ... Open »