Fun and festivities in Samoa - celebrations, festivals and cultural events 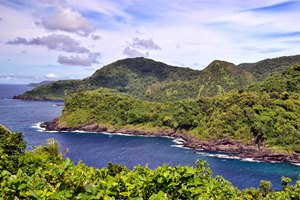 Besides such well-known holidays as Christmas, Easter, and New Year, Samoa hosts and organizes many different events. These are international sports events such as golf tournaments, fishing contests, and rugby games. It would be a mistake to forget to mention regional celebrations such as the birthday of Malietoa Tanumafili II (the former leader of the country), fautasi boat race, different festivals (Teuila, dancing festivals), and musical events. The Tourist Center in the capital regularly organizes events dedicated to the culture and traditional crafts of Samoan villages. The center is open in an unusual building that resembles the traditional Samoan building – fale.
Samoa sightseeing - top places to visit
The picturesque volcanic archipelago consisting of six islands is a wonderful destination for everyone who likes exploring wild areas untouched by the …
Read further
Fale is a traditional Samoan house made from wood. It consists of the floor, ceiling, and pillars that they are attached to. There are no walls but when needed locals put temporary walls made from palm tree leaves. Fale can be a residential building, a beach house, and a gathering place of the community members – a public house (fale tele). Today, many Samoans live in modern houses but they still build a fale for daytime napping. Foreign tourists can also stay at a fale instead of a hotel. Local schools are usually open in fale buildings but they are big and have electrical lighting.
Places worth visiting in Samoa. Samoa International Game Fishing Association holds a week-long tournament at the end of April and the beginning of May. This contest is very popular with fishing teams from Polynesia and some other countries in the world. Independence Day is one of the most important holidays on the islands. Samoa became an independent country in 1962 and celebrates this holiday on June 1. The National Orchestra Choir, the Ministry of Police Choir, and numerous music bands participate in festivities. Dancing and singing is an essential part of the holiday. The government presents prominent people with orders. The holiday ends with fireworks. Copyright www.orangesmile.com
National cuisine of Samoa - specialties, recipes and restaurants
Even though the traditional ingredients in the cuisine of Samoa are different from the products used in Europe, the taste of Samoan dishes is easier …
Read further
Samoa Swim is a summer swimming competition. There are two distances – 2 and 4 kilometers. The competitions take place in different parts of Samoa, and both professionals and amateurs are welcome to participate. Teuila Festival is a week-long festival with a diverse schedule. Starting from 1991, it has taken place in the country every year at the end of August and until the beginning of September. The Police Orchestra, choir and dancing bands from different parts of the country participate in the event. Siva, a traditional Samoan dance, contest, as well as modern dance contests, have become major parts of the event. Of course, visitors are also waiting for the Miss Teuila beauty pageant contest. Another spectacular show – the fautasi boat racing, these traditional Samoan boats have 40 oarsmen. The fire knife dancing (takes place several times a year as an independent event) and the Flower Parade also attract many foreign guests. 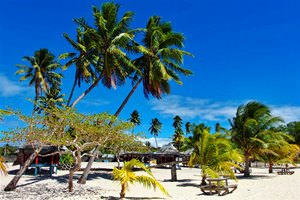 The Insel Fehmarn International Fair is a popular event dedicated to food and wine that takes place in September. The White Sunday in mid-October is an interesting tradition. Everyone wears white, and people go to church. By the way, tourists are allowed to attend this celebration too. If you happen to visit Samoa during the harvesting of palolo, you can consider yourself lucky because there is no fixed date for the Palolo holiday. Palolo is the name of a marine worm that swims up to the water surface one week after the full moon at the edge of October and November. Palolo is a local delicacy. The worm lives in corals and leaves them only once a year. Locals always wait for this event that lasts only one or two nights. They collect the delicacy with hand nets and eat it immediately. Sometimes, they roast palolo. Due to a large volume of the worm, it is also called the Pacific caviar.
National traditions and mentality of people in Samoa
Samoa is an island country in the southern part of the Pacific Ocean. It consists of 10 islands: two main islands (Savai'i and Upolu) and eight …
Read further
Don’t be surprised if you see men in skirts. They are wearing the lavalava, traditional male clothing. Lavalava is a part of the school uniform for boys, and local policemen wear it too. The full policeman uniform consists of the following: jacket, lavalava skirt, sandals, and a cap. Tourists do not need to go to a museum to see this outfit. Simply take a look at schoolchildren or watch the police parade during the Independence Day celebration in Apia. The police parade takes place before the official raising of the national flag. Policemen wearing traditional lavalava skirts march on the streets of the capital together with an orchestra. 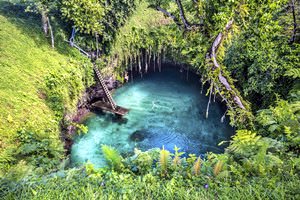 Tourists can get around in Samoa by taxi, bus, rented car, or bicycle. Ferries connect Upolu and Savaii islands. Buses are the cheapest, and this public transport is quite unusual in Samoa. A typical Samoan bus has these features: no windows (the simplest way to solve ventilation and heat problems inside the bus), bright colors, and loud music. All these features make it easy to notice public buses from afar. Local buses are painted in different colors of the rainbow, and every bus has a different combination of 2-3 colors. Taxi services are several times more expensive but they are more comfortable. Rented car is the most expensive but the most comfortable way to get around.
Samoa cultural sights. What to see?
Samoa is full of attractions. This is a place with many beautiful churches and unique culture, untouched natural beauty with waterfalls, caves, …
Read further
Finally, a couple of words about safety. Samoa is a safe country with a low level of crime. Local people have always been peaceful and have always had aiga, a family community, in charge of decision making. A typical aiga consists of several generations of male members of the family. A council (fono) consisting of matai (leaders) is on top of the aiga. Everyone – men and women, single and married, and children of different ages – has a social role in the country. The young are obliged to listen to older people, and the age hierarchy is a tradition that no one dares to change. Tourists can safely explore the islands at any time of the day. However, it is better to refrain from a stroll in a village during the evening prayer.

This article about national fests and celebrations of Samoa is protected by the copyright law. You can re-use the content, but only under the condition of placement of an active link to www.orangesmile.com.
Samoa guide chapters 1 2 3 4 5 6 7 8 9 10
Country maps