Cultural sightseeing in Samoa. What to visit - museums, temples, castles and palaces 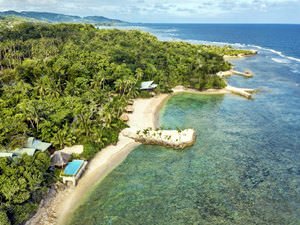 Samoa is full of attractions. This is a place with many beautiful churches and unique culture, untouched natural beauty with waterfalls, caves, geysers, lakes, forests, beaches, sea, and sun. In Samoa, tourists can visit unique territories like Manono that are free of cars and roads. The ocean and wind produce the loudest sounds on this island. Local people visit Manono to relax and enjoy the semi-wild lifestyle that several hundred residents of this island have regularly. The nearby island of Apolima is the most closed territory away from urban regions. Apolima is inhabited, and people live in a crater of an ancient volcano that has become relatively flat over the centuries. A plot of fertile soil is surrounded by vertical rocks here. The only village on the island is home to roughly one hundred people who live in fale – traditional Samoan huts with dome-shaped roofs and no permanent walls.
What to see and what to visit in Samoa with children
What destinations should tourists with children choose in Samoa? Isn’t this country too hot for children? Is it safe to visit Samoa, are there wild …
Read further
The majority of Samoans live in two big islands - Savai'i and Upolu. They are also major sightseeing destinations in the country. The capital of Samoa and its main port, Apia, is located approximately in the middle of the northern coast of Upolu. Three main roads start in the capital. These are East Coast Road and West Coast Road that go to the eastern and western parts of the island respectively, and Cross Island Road that goes to the south, crossing the island. The eastern and western roads go along the coast and merge, forming a circle. This means that tourists can use one road to see the island and return to the capital from the opposite side.
Upolu has a length of 75 kilometers from east to west. A mountain ridge consisting of extinct volcanoes occupies the central part of the island. Northern, eastern, and southeastern parts of the island are hilly and have multiple ridges and caves. Because of this, local rivers and streams form numerous waterfalls. They are spectacular and have become true tourist attractions. Here are some of the most famous waterfalls: Togitogiga, Fuipisia, Sopoaga, a cascade of small waterfalls called Papaseea Sliding Rock, and Papapapaitai that has a height of almost 100 meters. The northwest of Upolu is mostly flat, and so this part of the island is the location of Faleolo International Airport. Copyright www.orangesmile.com
Shopping in Samoa - best shopping places, what to buy?
Samoa is a small country in the center of the southern part of the Pacific Ocean. It is not easy to reach it simply because you need to take a …
Read further
Southern coast is an idyllic beach area with charming palm trees, turquoise water, and soft sand. There are several private beaches and the prestigious neighborhood of Maninoa Beach here. The Sinalei Resort is also located in this part of the island. Savai’i Island is mostly famous for its natural attractions such as tropical forests, waterfalls (Mu Pagoa, Afu Aau), and lava caves (Letui, Paia Dwarfs, Aopo). Lava fields look like they petrified yesterday even though the eruption of Matavanu Volcano happened more than one hundred years ago, at the beginning of the 20th century. Today, tourists can participate in excursions to the crater and surroundings. 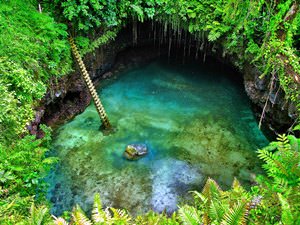 Samoans are quite religious people and the majority of them are Christians of different branches. There is a church in every settlement. Even the motto on the coat of arms of Samoa is “God be the Foundation of Samoa”. All churches are in good condition – almost all of them have white facades and bright, contrast elements of décor. They look beautiful, and there are no two churches that look the same. Each church has its individual design. Everyone is allowed to attend local churches regardless of their confession. The Anglican Christian Church is one of the notable attractions of Samoa as it keeps relics of John Williams, the first missionary in the region.
When and where to 'hang out' in Samoa - festivals and celebrations
Besides such well-known holidays as Christmas, Easter, and New Year, Samoa hosts and organizes many different events. These are international sports …
Read further
In Apia, tourists usually visit the National Museum of Samoa that has exhibitions dedicated to the history, art, and natural history of the islands. Nowadays, the majority of the exhibitions cover modern history and lifestyle of Samoa – the period of New Zealand’s reign and independence. The museum is open from 9:30 to 16:00. Apia Town Clock Tower is one of the most famous attractions in the capital. This is a great guide mark that will never let you get lost in Apia and a fantastic place to take photographs. The tower is located on Beach Road, on the same square with several banks and the most majestic cathedral of the capital and Samoa in general – the Immaculate Conception Cathedral. The Vailima River flows into the ocean near the gorgeous church. 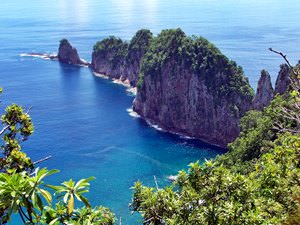 There is an office of the Tourist Center Samoa opposite the cathedral, near the waterfront. Tourists can visit this place to get schedules, maps, and information about the most popular attractions and local lifestyle. A recreational fale near the center offers foreign guests to learn more about the culture and traditional crafts of Samoa. Tourists can use buses and taxis on Upolu but they are not available on Savaii even though there is a coastal road on this island. To the west of Apia, in the village of Leulumoega, guests of Samoa can visit the Basilica Minor of Sancta Ana, one of the most beautiful churches in the country. If you want to explore the entire island with comfort, consider booking a car.
For active traveler - national parks, landscapes and nature of Samoa
Samoa consists of several islands, 8 small islands, and two big islands, namely, Upolu and Savaii. The country is located in the south of the Pacific …
Read further
Using Cross Island Road, tourists can get to Villa Vailima, the museum house of famous writer Robert Louis Stevenson who lived here from 1890 to 1894. Stevenson is the author of numerous adventure novels including the internationally famous bestseller Treasure Island. The writer is buried not far from the mansion, on Mount Vaea. Follow Cross Island Road and you will reach one more landmark – a Bahai temple, one of the seven temples around the world. Needless to say, this is a very interesting place for tourists. Bahai is a religion that is based on the idea of the unity of all gods from different confessions. Bahai encourages people to unite. This religion doesn’t approve icons, religious masses, and other church ceremonies. Bahai thinks that reading sacred books can replace them all. A picturesque park surrounds the temple, making the complex look even more attractive and poetic. This is a great place to take pictures.

This article about cultural sites of Samoa is protected by the copyright law. You can re-use the content, but only under the condition of placement of an active link to www.orangesmile.com.
Samoa guide chapters 1 2 3 4 5 6 7 8 9 10
Country maps

Famous sites of culture and history of Samoa in photoset