Sightseeing in Oran - what to see. Complete travel guide 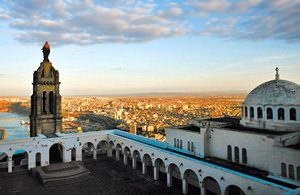 The coast of the Mediterranean Sea in Algeria is the location of an interesting settlement named Oran. This is the main port city in the country and one of the fastest developing centers of culture and commerce in Algeria. The territory of the city is conventionally divided into two parts, one of which is the historic city center with numerous architectural attractions, and the other part is newer because it was built by the French in the 19th century. Besides numerous attractions for any taste, Oran is famous for its amazing beaches that are perfect for a summer vacation. Finally, the picturesque nature of the region is one more advantage of this Algerian city.
During the Roman Empire period, there was already a small settlement on the site of modern Oran. However, when the Arabian troops conquered the Maghreb, the settlement was destroyed. A new town appeared on the same site only at the beginning of the 10th century. Oran was the name of this settlement established by the Andalusian Mauritians. The Jews from Andalusia and Mallorca migrated to Oran in 1391. A hundred years later, the Spanish established their authority in the town. They are widely recognized as the second founders of Oran. In 1790, a devastating earthquake almost completely ruined the city.
The French claimed the city in the first half of the 19th century. Thanks to their managing skills, the settlement recovered quickly and Oran soon turned into the main center of commerce in the region. Oran Massacre is a sad page in the history of this Algerian city. This was a mass killing of numerous Pied-Noir and European expatriates, many of which were tortured to death. In total, approximately three thousand and five hundred people fell victim to the massacre. There were even children among the dead. The surviving Europeans and Jews had to escape to France, and some people decided to move to Israel. This act of genocide against the Algerians of European descend will always remain in the history of the city. Copyright www.orangesmile.com
Madagh Beach is the main leisure recreation destination for both tourists and citizens of Oran. This is a fabulous place with scenic nature, clean sea, and breathtaking views. The beach is always well-kept because the city’s authorities maintain it in good condition. Every morning, a team of workers prepares the beach for guests. Soft sand covers the coastal area. Madagh Beach is a favorite destination of families with children because there are no high waves here – small mountains surround the beach and safely protect it from winds. The water is shallow near the coast and the depth increases steadily, making Madagh perfectly suitable for vacationers with small children who need extra safety. 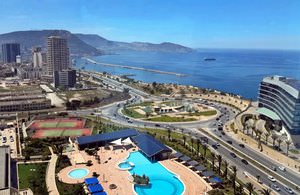 At this place, visitors can always rent everything they need for a comfortable stay. Sun loungers and umbrellas are available for rent. Do you enjoy starting your acquaintance with a city from seeing its underwater world? At Madagh, there is no need to search for diving equipment because it is available right on the spot. The sea water is clean so nothing will spoil your underwater journey. A pleasant meeting with various marine creatures and spectacular views of the Algerian flora await diving enthusiasts. When the sun sets, the area becomes painted in incredibly bright colors. The beach is usually empty on weekdays, the majority of locals and tourists prefer to visit Madagh on weekends.
Besides beach recreation, Oran is rich in various landmarks that also deserve the attention of tourists. This is particularly true about vacationers interested in the history of the region. Fort Santa Kruz is a popular place that is definitely worth visiting. Initially, there was a small church on the site of the fort. The church was built in 1505. However, the shrine was completely ruined during a battle with the English troops. In 1610, the city authorities decided to build a fort in this area. This is the fort that tourists can see nowadays. For centuries, the gorgeous stronghold has been attracting the attention of thousands of tourists. 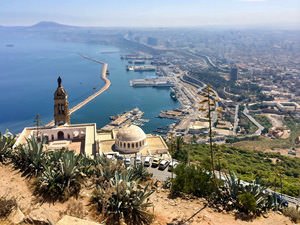 Guests of Oran try to visit the medieval fortress see with their own eyes how the major landmark looks like inside. Fort Santa Kruz is a solid stone construction with a closed structure. In the past, there was a military garrison in the fort. The main purpose of the military formation was to protect the central part of Oran from alien attacks. When a cholera epidemic outbreak happened in the city in 1847, the city’s bishop added a chapel to the fort. This small building has been an essential part of Santa Kruz since that time.
In Oran, there is a small airport that, nevertheless, receives international flights. Air carriers offer daily flights to Oran from many parts of the world, Europe included. Besides that, it is possible to reach this ancient city from other large Algerian settlements. As Oran is a port city, there are daily ferries that come from Spain, France, and Tunisia. Upon arriving at Oran airport, tourists can get to the city center by bus or minibus.
This guide to iconic landmarks and sights of Oran is protected by the copyright law. You can re-publish this content with mandatory attribution: direct and active hyperlink to www.orangesmile.com.

City tours, excursions and tickets in Oran and surroundings

National and city parks around Oran
♥   National Park 'Parc National de Tlemcen' , 123.6 km from the center. On the map

Art galleries in Oran and around
♥   Art museum 'Ahmed Zabana National Museum' Oran, 1.6 km from the center. On the map

Sightseeing in Algeria: things to see

If you want to enjoy both sightseeing and looking at breathtaking landscapes, do not forget to visit the city of Djemila. Located high in the mountains, the city offers spectacular views of surrounding towns and the coastline. Many centuries ago the city was the property of the Romans. Today amazing landmarks of Djemila are reminiscent of that period. These are traditional Roman buildings, churches and triumphal arcs. There are other famous buildings in the city such as churches that were constructed during the medieval period. … Open

Search touristic sites on the map of Oran

Sightseeing in regions nearby Oran

Almeria
Alcazaba castle is known as the most famous sight of the city. It was built in the times, when the city was ruled by the Moors. The castle was built by order of Emir Abd al-Rahman in the 13th century. Later the castle has been rebuilt and expanded a number of times, that’s why today this is a huge architectural complex. The highest tower of this castle, Torre del Amenahe, ... Open »
La Palma
... Open »
Murcia
Today this is a real city of contrasts: near desert areas you can see lush orchards and old houses border with ultra-modern buildings. The resort is perfect for those visitors, who like relaxing beach rest and unhurried walks. Beaches here are clean and spacious, and each of them will certainly have several restaurants and bars. Cozy squares that can be found throughout the ... Open »
Alicante
The famous trading street Calle Mayor also begins nearby the church. Here you will find numerous shops, food markets and boutiques. The street ends at Plaza del Ayuntamiento which borders several administrative buildings including the mayor’s office. Alicante also has several valuable religious buildings like La Catedral San Nicolas de Bari cathedral the building of which ... Open »
Granada
Go deeper in quarters of Granada and you will find one of the most amazing and oldest regions of the city – Albayzín. When describing Granada, it’s impossible not to mention the splendor of Alhambra, the heart of Andalusia. This is an elegant ancient palace that has managed to survive better than all other Arabian palaces in the world. Granada traditionally inspires ... Open »
Nerja
As the number of visitors grows every year, more tourist facilities are needed. However, there are still no high-rise buildings in the town. As a rule, here are built of two- or three-story buildings, which are stretched on long streets along the coast. The observation area called the Balcony of Europe has become one of the most popular places of Nerja. The area is built on ... Open »

All about Oran, Algeria - sightseeings, attractions, touristic spots, architecture, history, culture and cuisine. Prepare your trip together with OrangeSmile.com - find out the 'must see' things in Oran, which places to visit, which excursions to take, where the breathtaking views are waiting for you. Planning your trip with this travel guide will help your to get the most out of Oran in few days.