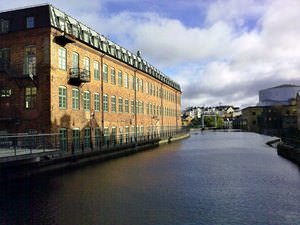 Norrköping has preserved lots of beautiful historic buildings. In one of the central squares, you can see the old Town Hall Norrkopings Radhus. Its construction began in 1907 and lasted three years. The Town Hall building originally housed the main court, and meetings of the city council were held here later. The very first Town Hall was erected on this site in the 18th century but was completely rebuilt in 1906.
Family holidays with kids in Norrkoping. How to entertain your child, things to show to children.
The Swedish city of Norrköping favorably located by the picturesque river Motala attracts many tourists looking for a relaxing and peaceful holiday. It offers plenty of attractions - both …

Open
The place where the building stands now was once a swamp. To make the building's foundation as strong as possible, more than 4,000 concrete pillars had to be driven into the ground. Today, the main feature of the Town Hall is its 69-meter-tall tower visible from many city streets. At the top of the tower, you'll find the most popular observation deck in town overlooking many other city attractions. The facade of the town hall is of great interest too - ancient niches with beautiful sculptures have been preserved in some of its parts.
Learn a lot of interesting things about the history of the city during a tour of Norrköping's main museum - the Norrkopings Stadsmuseum. Its current location is the old weaving factory building, which in itself is a valuable historical monument. The opening of the museum took place in 1981 in one of the most picturesque areas of the city, on the riverbank. Copyright www.orangesmile.com
Cuisine of Norrkoping for gourmet with top restaurants and cafe
In Norrköping, fans of new culinary discoveries can taste popular Swedish dishes. The regional cuisine is considered simple and satisfying, dominated by meat and seasonal vegetables, as …

Open
The main part of the exposition presented is dedicated to the history of the textile industry. The most interesting exhibits are old looms - they are all in excellent condition and can be put into operation if desired. In total, the museum has collected about 40,000 exhibits, including historical documents and the first photographs of the city, household items, and works of art. Of special interest is a shopping street located near the museum. It has been restored in accordance with the traditions of past centuries. The street accommodates craft workshops, a pastry shop, and even a fashion store. Many tourists come here in search of interesting souvenirs. 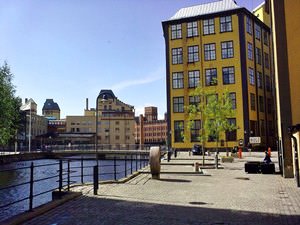 An important religious monument, Matteus Kyrka Church, is located away from the city center. The church building is considered a striking Neo-Gothic monument built at the end of the 19th century. In the second half of the 19th century, Norrköping experienced rapid industrial growth, the city population has increased several times within just a few years. Such rapid development resulted in the need to build a new church, and it was decided to build it on the north side. Today, the church named after St. Matthew is located in a vast park. It is distinguished by its spectacular facade design and 64-meter tower. An interesting feature of the church is the bells installed in the tower. The largest bell weighs 2 107 kg. The interior of the church decorated with rare marbles and partially preserved gilded mosaic is also striking in its splendor.
Authentic traditions, festivals and lifestyle of Norrkoping inhabitants
Residents of Norrköping are great admirers of historical traditions and regional culture. Many foreign tourists may find the townspeople overly restrained and gloomy, but this impression is …

Open
One of the oldest churches in Norrköping is Sankt Olai Kyrka. The first church appeared in its place in the early Middle Ages, but in 1567, it was completely destroyed during one of the bloody battles. After the war ended, they started to rebuild the church, and the first stone was laid in 1614. The first and only reconstruction in the history of the church took place in 1870. Since its construction, it has managed to preserve many original elements of internal and external decoration. 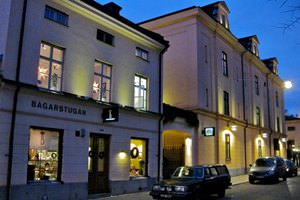 Fans of painting and other areas of art would likely be interested in the Norrkopings Konstmuseum. This art museum is housed in a spectacular historic building, and its collection began growing in 1900. At that time, one of the wealthy local industrialists presented the city with several valuable artworks. If you visit the museum today, you can see works by famous Swedish artists and sculptors.
Your active city break in Norrkoping. Attractions, recreation and entertainment - best places to spend your day and night here
Although Norrköping cannot offer lots of entertainment centers, one of the country's most famous amusement parks - Kolmarden - can be found in the vicinity of the city. It occupies a vast …

Open
Its collection of works by Swedish modernists is considered one of the largest in the country. Part of the museum’s halls is reserved for temporary exhibitions at which contemporary artists and photographers present their masterpieces. Although the museum occupies a relatively small area, its collection is considered one of the most valuable in Sweden. Walking through the city streets, you can see beautiful historic buildings of various periods. Many old buildings are currently occupied by cafes and restaurants, as well as stores and souvenir shops.

This guide to cultural sights Norrkoping is protected by the copyright law. You can re-publish this content with mandatory attribution: direct and active hyperlink to www.orangesmile.com.
Norrkoping - guide chapters 1 2 3 4 5 6 7 8
Car rental on OrangeSmile.com

Photogallery of cultural heritage of Norrkoping

Excursions over cultural sights of neighbours of Norrkoping

Vasteras
The Stadshotellet Hotel is one of the newer landmarks of the city. The iconic hotel was opened in 1907. The building is a wonderful example of the modern style, and the interior design is simply flawless. The prestigious hotel still serves travelers who claim the best. Skrapan skyscraper has also become a popular landmark of Vasteras. There is a stylish bar on the last floor ... Open »
Stockholm
The majority of historic sites preserved on the territory of the old city are located in the Old Center. Here you can see a beautiful Cathedral of St. Nicholas, several buildings of the 13th century, Riddarholmskyrkan Church, as well as numerous interesting antique shops and cafes. A walk through the picturesque quarter will become a real trip to the Middle Ages. Rosendahl ... Open »
Uppsala
There is an interesting religious attraction in the city - the beautiful Skattkammaren Cathedral. Its construction has begun in 1260 and ended only in the early 15th century. The beautiful cathedral is one of the oldest religious buildings of the country. On the territory of the cathedral there are tombs of prominent historical figures and representatives of royal families. ... Open »
Kalmar
The Öland Bridge is one more famous symbol of Kalmar. This is the longest bridge in Sweden. The length of the bridge is 6,000 meters, and its height reaches 40 meters in the middle. The height is not random – the bridge was constructed in a way to make sure that ships can sail without any trouble. This motorway bridge connects Kalmar with Färjestaden on Öland Island. The ... Open »
Goteborg
Kronhuset is the oldest building in the city that has managed to survive till our days. The construction of the building was completed in 1643. Initially the building was intended to become an artillery arsenal. The building of East India Company was built several years later. It also has managed to survive in its original form till our days. Currently the large-scale building ... Open »
Kristianstad
The historic castle is now in private ownership, in 1956 the owners decided to make it available for cultural events and tours. Today, the restored castle hosts conferences and lectures, as well as regular guided tours. A very beautiful landscaped garden is formed around the castle. In summer, it often becomes the venue for wedding ceremonies. The largest cultural center ... Open »

Culture guide to Norrkoping. Which fascinating sights to visit once you are in Norrkoping: temples, churches, museums, theaters and castles. Recommendations (with addresses, phone numbers and links) on the places 'must visit' in Norrkoping. Plan your own city excursion by using this page info!