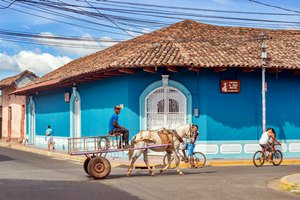 The country washed by the waters of two oceans can be truly proud of its unique nature and amazing prospects for budget tourism. Year after year, Nicaragua becomes a more attractive destination for tourists. In recent years, the tourist infrastructure of the country has been developing rapidly, and so new high-class hotels, shopping and entertainment centers appeared here. Local prices are affordable even for budget tourists.
For active traveler - national parks, landscapes and nature of Nicaragua
Fans of trekking and camping who are not very demanding for comfort will find many interesting routes in Nicaragua. Beautiful islands and lakes, …
Read further
Members of Christopher Columbus’s crew were the first Europeans that appeared on the coast of Nicaragua in 1502. Spanish colonizers started settling in the area actively twenty years later. This is one of a few countries in the world, residents of which managed to sign a peace treaty with colonizers. The name of the country is another reminder of that event – Nicaragua is named after Nicarao, the name of cacique or chieftain of a powerful local tribe.
Spanish settlers planned to open silver and gold mines in the new territory, but Nicaragua didn’t have large deposits of these metals. Because of that, agriculture became the main occupation of Spanish colonizers. Quite an interesting fact – the eastern territory of the country remained uncultivated even during the colonization period. Known as the “Coast of Mosquitos”, this part of Nicaragua was completely covered by impenetrable forests. The country became independent in 1838. After that, it had to overcome several complicated periods in its history. Modern Nicaragua is a country with developing social, cultural, and tourist spheres. Copyright www.orangesmile.com
National cuisine of Nicaragua - specialties, recipes and restaurants
Nicaragua is a country in Central America that is located between the Pacific Ocean and the Caribbean Sea. The traditional Nicaraguan cuisine includes …
Read further
Granada remains the major tourist destination in the country. This is a city with truly spectacular architecture and inimitable lifestyle. Just like many years ago, horses remain an important means of transport for local people. Tourists can also enjoy a ride in a beautifully decorated horse-driven cart. This way, it is particularly pleasant to explore gorgeous local churches, colonial mansions, and other marvelous buildings. 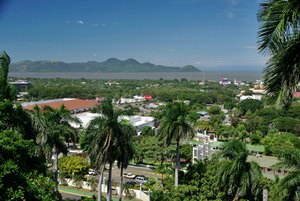 Mombacho Volcano is located in the city’s suburbs. Nowadays, it is a part of the same-named national park. Air is very humid in this region, and because of this local flora looks very exotic. Together with a local guide, tourists can get to the top of the volcano and check rare orchid types and other plants during this excursion. There is a charming observation deck at the top of the volcano.
National traditions and mentality of people in Nicaragua
Nicaragua is a country in Central America that borders with Costa Rica in the south and Honduras in the north. There are not many tourists from Europe …
Read further
Do you want to feel united with nature? The Corn Islands offer this amazing opportunity. This island group is located approximately 70 kilometers away from Nicaragua. These islands have no permanent residents, and so many tourists enjoy visiting them when they want to relax at secluded beaches with white sand. There are also interesting diving sites. Colorful national festivals take place on the islands several times a year. When there are no events and celebrations, the Corn Islands are an ultimately calm and peaceful place. 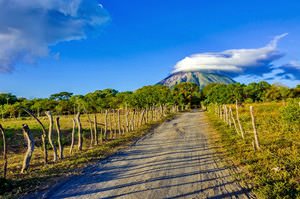 The city of Esteli is another interesting place worth visiting. Many tourists know Esteli as the main center of tobacco production in the country. However, tobacco factories and numerous tobacco shops are not the only places of interest in the city. There are attractive old buildings in Esteli, and its suburbs are the location of a unique archaeological site with ancient rock drawings and fragments of prehistoric animals.
Nicaragua cultural sights. What to see?
The Pacific Ocean, Caribbean Sea, lakes, tropical forests, and volcanoes – these are the best attractions in Nicaragua. Nevertheless, it is still …
Read further
If active excursions are your priority during vacations, the colonial city of Managua is a must-visit destination. The Old Cathedral of Managua (St. James’ Cathedral) is one of the main symbols of the city. It was designed by a Belgian architect who also brought the iron frame for the building from Belgium. Managua is the largest city in the country. There is a beautiful lake with the same name in the center of it. In addition to numerous architectural landmarks, tourists can visit various interesting museums, art galleries, and cultural centers. 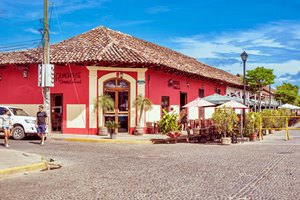 If you like unusual landmarks, León Viejo is the right place to visit. This old town was founded yet in the 16th century, but it was destroyed during a powerful volcano eruption. Archaeologists found the ruins of the city in 1967 and managed to restore some buildings of the colonial period. Nowadays, Leon Viejo is an archaeological park and a UNESCO World Heritage Site.
Things to do in Nicaragua - active leisure
Nicaragua is located in Central America between the Pacific Ocean and the Caribbean Sea. The country has a tropical climate. People tolerate hot …
Read further
Canada and the United States have regular air connection with Nicaragua. Tourists can also reach this country from airports of Panama, Salvador, Mexico, and Costa Rica. Managua Airport accepts the majority of international flights.

This article about iconic landmarks and sights of Nicaragua is protected by the copyright law. You can re-use the content, but only under the condition of placement of an active link to www.orangesmile.com.
Nicaragua guide chapters 1 2 3 4 5 6 7 8 9 10

Sightseeing in popular cities of Nicaragua

Managua
Managua was on the maps before the moment when famous explorer Christopher Columbus reached America. Initially, this was a small fishing village. Managua officially became a town only in 1819. The settlement had a beneficial location, and this fact helped the region to develop. Lying between Leon and Granada, the village managed to turn into a large center of commerce within a short time. In 1857, an army of mercenaries with William Walker as their leader ruined Granada, and Managua became the … Read more

Granada City
Granada City was founded in 1524. Conquistador Francisco Hernández de Córdoba was the founder of this settlement. He named Granada after a Spanish city. He chose a strip of land between North and South America as the location for a new settlement. When the Spanish owned this territory, Granada was developing actively and getting richer. Gold deposits were the main reason for wealth. The Spanish mined gold and transferred it to other countries. Besides the precious metal, this region had … Read more