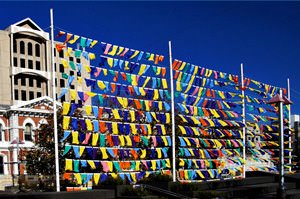 Stunning, simply breath-taking nature remains the main distinctive feature of New Zealand. The territory of the country is home to 10 national parks, and even streets of modern cities simply dive in greenery and blooming flower beds. Te Ika-a-Māui was called one of the most beautiful places on Earth. The island features snow-capped mountains, sleeping volcanoes, spacious green fields and hundreds of geysers. There are many beaches on the coast of the island; this place is almost always crowded with vacationers who mix sunbathing with excursions to nature reserves.
Unique sights of New Zealand from our series 'Extreme places on Earth'
These spots really worth the attention of a real traveler-researcher. …
Read further
Travelers, who are hungry for bustling city life, will find all they need in Auckland. This city is rich in cultural centers, shops, restaurants and many other entertainment facilities. The most famous and visited museums of Auckland are the Museum of Auckland, which exhibits a rich collection of historic artefacts, the National Marine Museum, the Museum of Transport, the Botanic Garden and the Zoo. Kafia and Raglan regions also have the right to be called landmarks of the North Island. These beach areas have become a true mecca for all surfers. There is one more landmark near Kafia - Bridal Veil Falls, tremendously beautiful waterfalls. Travelers are also recommended to visit Te Puia Hot Springs, Te Koutu Park, Te Toto Gorge and Waitomo Caves.
Stephens Island is located between North and South Islands. This small island is home to many rare animals. In tropical forests of Stephens Island one can see tuatara, a close relative of dinosaurs, which are extinct many million years ago. The island is a restricted zone, and the area, where the unique reptile lives, is put under strict control. Local biologist work hard to keep that rare animal and ensure it won't disappear in future. Copyright www.orangesmile.com
National cuisine of New Zealand - specialties, recipes and restaurants
The modern cuisine of New Zealand is much different from the traditional cuisine of Maori people. Many local dishes appeared here together with …
Read further
Blenheim is the most popular and widely visited city of the South Island. The best way to get acquainted with historic heritage of the city is to visit the Seymour Square area and during an excursion in Museum Park. Pollard Park is also a very interesting destination in Blenheim. The park is mostly famous for a large collection of roses and camellias. If you visit the city in February, you will be able to participate in a very unusual holiday dedicated to the grape. The theme of the celebration is not random as during several centuries Blenheim has been the main centre of wine making on the island. Dunedin is the second largest city on the South Island and home to several beautiful medieval buildings. Larnach Castle is usually called the most famous landmark of this place. Visitors are also very welcome in the Museum of Otago, the Museum of Natural History, Dunedin Gallery and Botanic Garden. 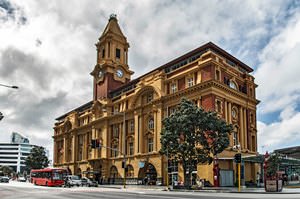 The territory of New Zealand started to be inhabited quite late, only in the second half of the 14th century, when the first Polynesians came here. The first Europeans who reached the coast of New Zealand were Dutch navigators led by Abel Tasman. They boarded the coast in 1642. Europeans were welcomed by the belligerent tribes of aborigines, which forced them to stop colonizing the distant islands.
National traditions and mentality of people in New Zealand
New Zealand is miraculous, mysterious, and sometimes even hard to understand for people from Europe or North America. However, modern New Zealand …
Read further
Then, the islands were visited by James Cook. In 1769, he created the first accurate map of the coastal line of New Zealand. At the end of the 18th century, the islands started attracting whalers and seal hunters. Europeans imported products, water, metal items, and weapons to the islands. In 1841, the islands were officially recognized as a British colony. Later, in 1856, they got a right of the partial self-government. The country became completely independent from Great Britain in 1986. 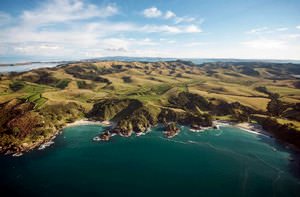 Today, New Zealand is a homeland of the extreme tourism. There are perfect conditions for different sports, most of which are really extreme. They include rap jumping, bungee jumping, air surfing, and gliding. Nature here created excellent conditions for these kinds of sport.
New Zealand cultural sights. What to see?
Despite the fact that the breathtaking nature of the country is considered the main treasure of New Zealand, there are still some interesting manmade …
Read further
Over the last decades, exactly sport has also attracted fans of modern cinema. Unique nature attracts directors from all over the world. Such series, as Xena: Warrior Princess, Hercules: The Legendary Journeys, and the franchise The Lord of the Rings were shot here. Fans of these films want to see the places they have seen in the films, so they can take interesting themed trips here. 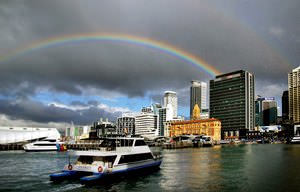 New Zealand is actively visited by fans of food tourism. Here, they can taste the most popular dishes of the Anglo-Saxon cuisine. For the natives, the traditional dishes are fried fish and meat served with fried potatoes. Connoisseurs of seafood have an opportunity to taste lobsters, oysters and other exotic seafood. Most of the national dishes are cooked over an open fire. Another original local specialty is sweet potatoes called kumara. The important component of the national cuisine is cheeses, most of which cannot be found anywhere else in the world.

This article about iconic landmarks and sights of New Zealand is protected by the copyright law. You can re-use the content, but only under the condition of placement of an active link to www.orangesmile.com.
New Zealand guide chapters 1 2 3 4 5 6 7 8 9 10 11 12

Famous and uniques places in New Zealand from our review series 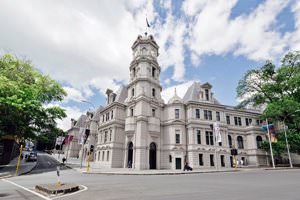 The Auckland Art Gallery is the greatest architectural monument in New Zealand. This art gallery was built in 1887. Today there has placed a rich collection of art pieces of local and foreign artists. Large halls are usually used for international exhibitions.

Over a number of years people from Auckland asked the city government to build a new library and an art gallery. However, the government didn’t have money for such tremendous projects. Then the wealthy people of Auckland donated to the building of the cultural centre. A famous city figure – Sir George Maurice O’Rorke was one of the founders of this art gallery.

Wealthy citizens donated from their private collections the first books to the new library and the unique pieces of art for the gallery. Other rich people followed … Read all 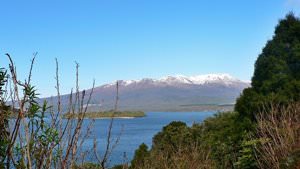 In New Zealand, on the territory of the North Island, you can see the Taupo Volcano. Its huge caldera is also filled with a wonderful lake. For the last 70 000 years, this volcano has erupted several times and became quite dangerous for the planet. Until now it is a serious threaten for all types of life. If a major eruption happens again, all New Zealand islands will go under the water. More than that, a lot of people will die.

Approximately, the last eruption was 26, 5 thousand years ago. The official name of the eruption is the Oruanui eruption. About it was saved an official record. In the old Chinese sources, it was written as an outstanding appearance of the red sky. The eruption was rather large and continuous, that’s why it could be seen from the modern territory of China. … Read all 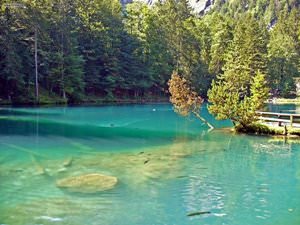 Rotomairewhenua Lake has the clearest natural fresh water in the world. Its name is quite hard to pronounce. It translates from Maori as the "Blue Lake". This small freshwater lake has placed on the territory of Nelson Lakes National Park in New Zealand. It is a part of the complex system of lakes. The lake was detailed researched only in 2011 and it has shown that the lake’s water is extremely clear.

Its visibility goes up to 80 meters. Year by year the lake fills with the water of the nearby glaciers. The water falls through mountains and goes through the various natural rocks that are like filters in the natural world. Thanks to its clearness, the water has the unique wonderful color. Throughout a day the water varies from the deep blue to the light violet.

Rob Merrilees was the … Read all
All unique sightseeing New Zealand 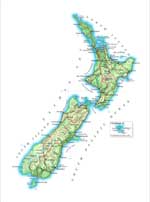 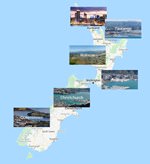 Queenstown
Archaeologists proved during excavations that there was a small village in the territory of the modern resort many centuries ago. At that time, the indigenous Maori people lived here. When Europeans arrived in New Zealand, the indigenous people were forced to leave their land. A group of explorers and their leader John Chabin reached the shore of Lake Wakatipu in 1856. They were searching for a suitable area to make a sheep breeding farm. Three years later, Donald Hay and Donald Cameron … Read more

Rotorua
The first European appeared on the site of the modern thermal springs resort in 1828. Historians assume that this was Phillip Tapsell, a merchant who was trading with the New Zealand town of Maketu. Initially, different Maori tribes were living in Rotorua. The traditions of the indigenous people are cherished and carefully preserved to this day. In 1883, the government of New Zealand decided to establish a spa resort in the unique area. Later, this region got special status. The first railroad … Read more

Auckland
Kelly Tarlton’s Antarctic Encounter & Underwater World is a research center that has turned into a popular tourist sight. This center is dedicated to Antarctic animals; the research center has an adjacent thematic museum. Visitors to this museum will learn interesting information about wonderful inhabitants of Arctic. There is also a large swimming pool with stingrays in it. Visitors can not only watch but also touch these marine creatures. Fans of unusual entertainment should not forget to … Read more

Christchurch
Mount Cavendish is the highest spot in the city. It is possible to reach the top by cable car. A ride on the cable car is an exciting entertainment on its own. Moreover, there is a picturesque park on the mountaintop. The best observation deck in the city is also located here. It is a fabulous place to see all signature landmarks of the city in detail. Travelers, who are short in time and cannot dedicate several days to sightseeing and exploring historical or natural landmarks of Christchurch, … Read more