Sightseeing in Queenstown - what to see. Complete travel guide 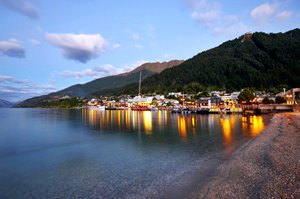 If you plan to explore the South Island of New Zealand, don’t forget to visit the magnificent town of Queenstown that is widely famous for its picturesque nature. This settlement lies near Lake Wakatipu against the breathtaking Southern Alps. Queenstown is one of the most visited towns in New Zealand that attracts mostly fans of extreme sports. Are you in the mood for something truly thrilling? In Queenstown, you have an amazing opportunity to jump into the abyss using the highest bungee jump or conquer fast mountain rivers during a risky and amusing rafting adventure. The town itself is calm and peaceful, so even fishing enthusiasts can enjoy their favorite hobby without any problem.
Archaeologists proved during excavations that there was a small village in the territory of the modern resort many centuries ago. At that time, the indigenous Maori people lived here. When Europeans arrived in New Zealand, the indigenous people were forced to leave their land. A group of explorers and their leader John Chabin reached the shore of Lake Wakatipu in 1856. They were searching for a suitable area to make a sheep breeding farm. Three years later, Donald Hay and Donald Cameron arrived here. They were primarily interested in the historic heritage of the unexplored territory.
In 1862, gold was discovered in the river near Queenstown. This drew the attention of multiple foreigners to this part of the country. A true gold rush started in Queensland. The settlement started expanding, and its population was growing. The town got a borough status in 1866. However, when the gold rush ended, the population of Queenstown declined drastically. Starting from the beginning of the 20th century and to this day, tourism has been the main source of income for Queenstown. Thanks to the growing popularity of this destination, it has become possible to turn the once forgotten settlement into one of the best resorts in the region. Copyright www.orangesmile.com
All beaches in Queenstown are wild, so do not expect to find comfort and beach infrastructure here. There are no sun lounger and umbrella rentals here, same as dressing cabins. Despite this, there are always many vacationers on the lakeshore because the area is so charming that it is hard to resist the temptation to relax on the pebble surface. Queenstown Bay is the central recreation area in the town. This is the most crowded part of Lake Wakatipu. The area is situated in the central part of the town. This beach hosts daily entertaining events and parties. It is very comfortable to relax with kids here because the water is shallow near the coast. 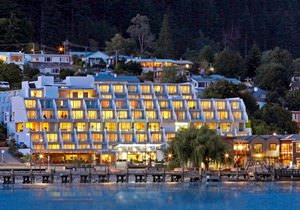 Walk a bit further from the central beach along the coast, and you will reach Sunshine Bay. This is a place to find peace and serenity away from the bustling town and large groups of people. Fine pebbles cover the entire beach, so it is better to find proper shoes beforehand if you want to take a walk here. Despite some distance from the central part of Queensland, this coastal area is always clean. Just like the beach mentioned above, Sunshine Bay Beach is suitable for vacationers with small children. The water is shallow near the coast, and the bottom doesn’t have any sharp objects. The water is so clean here that it is easy to see the underwater world of the lake without any special equipment.
Not far from Queenstown, tourists can visit another local attraction – Walter Peak Farm. This is a piece of picturesque nature that is great for relaxing and leaving all problems and difficulties behind. Moreover, a visit to this farm is an excellent opportunity to see how the countryside lifestyle in New Zealand is different from the life of people in towns. If you want, you can enjoy a horseback riding tour to the most beautiful areas of the farm. The landscapes are so fantastic here that many people spend hours sitting at the lakeshore. If you like animals, you can try to shave a sheep or to feed a deer. In the evening, a delicious barbecue awaits all guests. 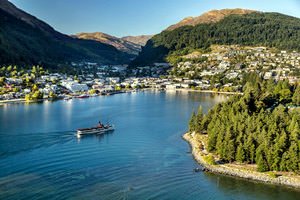 Fishermen can try to catch excellent trout in Queensland. This fish lives in the local waters all year round. By the way, you can fish not only from the coast. There are cruises for fans of this activity, during which people can fish in the middle of Lake Wakatipu. Naturally, this drastically raises your chances for a big catch. After fishing, it is incredibly pleasant to make a small cruise in the area. The surrounding nature is so spectacular and unique that it attracts not only tourists but also filmmakers. The legendary blockbuster “The Lord of the Rings” was filmed near Queenstown.
The airplane is the fastest way to get to Queenstown. Local airport receives flights from such cities as Auckland, Wellington, Christchurch, as well as international flights from Sydney, Brisbane, and Melbourne. For European tourists, it is more comfortable to fly to Auckland first and then take a flight to Queenstown. To get from the airport to the central part of the town, tourists can rent a car, call a taxi or buy tickets to a bus that departs in the right direction every twenty minutes.
This guide to iconic landmarks and sights of Queenstown is protected by the copyright law. You can re-publish this content with mandatory attribution: direct and active hyperlink to www.orangesmile.com.

City tours, excursions and tickets in Queenstown and surroundings

National and city parks around Queenstown
♥   National Park 'Mount Aspiring' , 89.9 km from the center. On the map

Sights around Queenstown from our guide 'Extreme places on Earth' 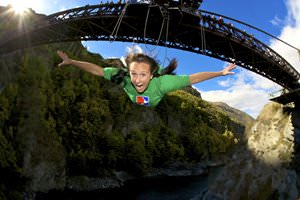 Distance from Queenstown center - 18.8 km.
According to one of the versions, Queenstown is home to this stunning entertainment. It is about the fact that Kawarai Bridge became the first official place for the jumps, which was opened in 1988. This is most likely that the supporters of this conversation unofficially jumped with the bungee in many other countries as well. The original entertainment was first legalized in Queenstown. Although today the height of the space accessible in New Zealand for jumps is incomparable with other platforms, Kawarai Bridge is nevertheless visited by thousands of tourists. The trip to Queenstown, on the legendary Ledge Urban Bangee spa, is an honor for real followers of Bunjee Jumping. … Read further

Stephens Island is located between North and South Islands. This small island is home to many rare animals. In tropical forests of Stephens Island one can see tuatara, a close relative of dinosaurs, which are extinct many million years ago. The island is a restricted zone, and the area, where the unique reptile lives, is put under strict control. Local biologist work hard to keep that rare animal and ensure it won't disappear in future. … Open

Search touristic sites on the map of Queenstown

Sightseeing in regions nearby Queenstown

Christchurch
In 2011, Christchurch suffered much damage from an earthquake. Thanks to hard work and efforts of local people, it became possible to restore the city fast. Numerous travelers arrive in Christchurch in order to get acquainted with the unique cultural traditions and magnificent landmarks of this place. Beautiful ChristChurch Cathedral remains the main historical symbol of the ... Open »
Rotorua
Besides the historic past of the indigenous people of Rotorua, the museum exhibits artifacts that tell the history of the city and its development. Visitors are even welcome to see a small film about the past of local people and the geothermal springs of this part of New Zealand. The film is only fifteen minutes long but its authors managed to cover all important events in ... Open »
Auckland
In the 20th century, the city began to attract settlers from neighbor states. That is the reason why people of so many cultures live in Auckland. Polynesians make up a significant part of the population, so Auckland has an informal nickname "The unofficial capital of Polynesia". The multinational culture of the city is one of its most attractive features. It is a place where ... Open »
Sydney
The Rocks Quarter The Rocks is a historic part of the city that has been transformed into a gastronomic and shopping quarter. Here visitors will find numerous restaurants, located along the waterline and providing great views of the Opera House. The western shore of Sydney Cove right above the Rocks is the location of a part of the Harbour Bridge. The history of Australia ... Open »
Canberra
One of the main sights of the capital is the Botanic Garden the total area of which estimates 50 hectares. Here you can see over 6 thousand of types of plants many of which look like they have come from fairytales. There is a huge eucalypt grove in the garden and a garden of herbs. Those tourists, who want to find out more about Australian aboriginals, will enjoy visiting ... Open »
Gold Coast
The young city began to attract its first travelers in 1925, after the construction of the surrounding roads. Its infrastructure has become more and more perfect with every passing year. In the 30-ies the first upscale hotels and resorts appeared there. Its present name Gold Coast received in 1940 thanks to the local journalists. It can be literally translated as "golden ... Open »

All about Queenstown, New Zealand - sightseeings, attractions, touristic spots, architecture, history, culture and cuisine. Prepare your trip together with OrangeSmile.com - find out the 'must see' things in Queenstown, which places to visit, which excursions to take, where the breathtaking views are waiting for you. Planning your trip with this travel guide will help your to get the most out of Queenstown in few days.